Star density in- versus out- of the arms of the galactic pattern?

What is the density difference in our galaxy (or in a typical spiral), 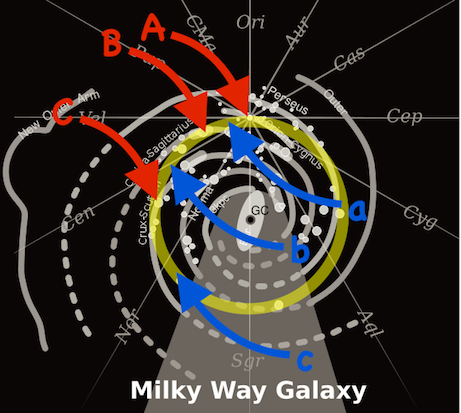 ...which shows the shape of the density through and between the arms?

(Perhaps at the "corotation radius", which is about where we are.)

= I understand that one of the reasons the arms "appear real" is just that there are more bright young stars forming in the arms (due to the higher pressure). Perhaps the actual density difference is very low?

= Perhaps the density variation is dependent on the type of star, or other material - what about things like gasses?

= Let's say the percentage I am asking about is X% - at our radius. Is it X% at all radii? How does the "strengthiness" percentage vary with radius? This is not immediately intuitive from looking at images.

But, at the moment the Gaia satellite is measuring the position and distances of about a billion stars and other objects. A much more detailed three dimensional map will be created with that data, including distance data for dim stars whose distances we were as yet unable to measure. So there is hope ;-)

NB. The first data release of Gaia has been published in September. I haven't found any papers that were able to answer your question (my search was not extensive though), but they might be forthcoming. Of course if you have some programming skills, you might determine the density differences from the data (available here) yourself.

EDIT - Just took a look at the data, the parallax (and therefore the distance) is still lacking for many stars. Hopefully this will change with future data releases.

= I understand that one of the reasons the arms "appear real" is just that there are more bright young stars forming in the arms (due to the higher pressure). Perhaps the actual density difference is very low?

I would expect that the density difference of stars is quite small.

= Perhaps the density variation is dependent on the type of star, or other material - what about things like gasses?

The density variation is certainly different between different types of stars. High mass stars only occur near star forming regions (i.e. in spiral arms). Their lifespan is so short that they do not have the time to get very far from the region in which they were formed.

I'd expect that the density variation for gas and dust will be higher (but I have no knowledge to support this).

15
How much greater is the star density in our galactic bar?
1
Can we learn anything from observing galaxies edge-on, like the Spindle Galaxy?
1
number density of Dark Matter Halos Versus number density of Galaxies
2
What has GAIA found out about the dwarf galaxy heritage of stars in the Milky Way, if anything?
1
What object(s) are furthest above/below the galactic plane?
3
How is the potential-density pair relation derived?