How can clouds form in Jupiter's atmosphere of Hydrogen and Helium?

Here is a graphic of cloud layers of Jupiter (source: Wikipedia): 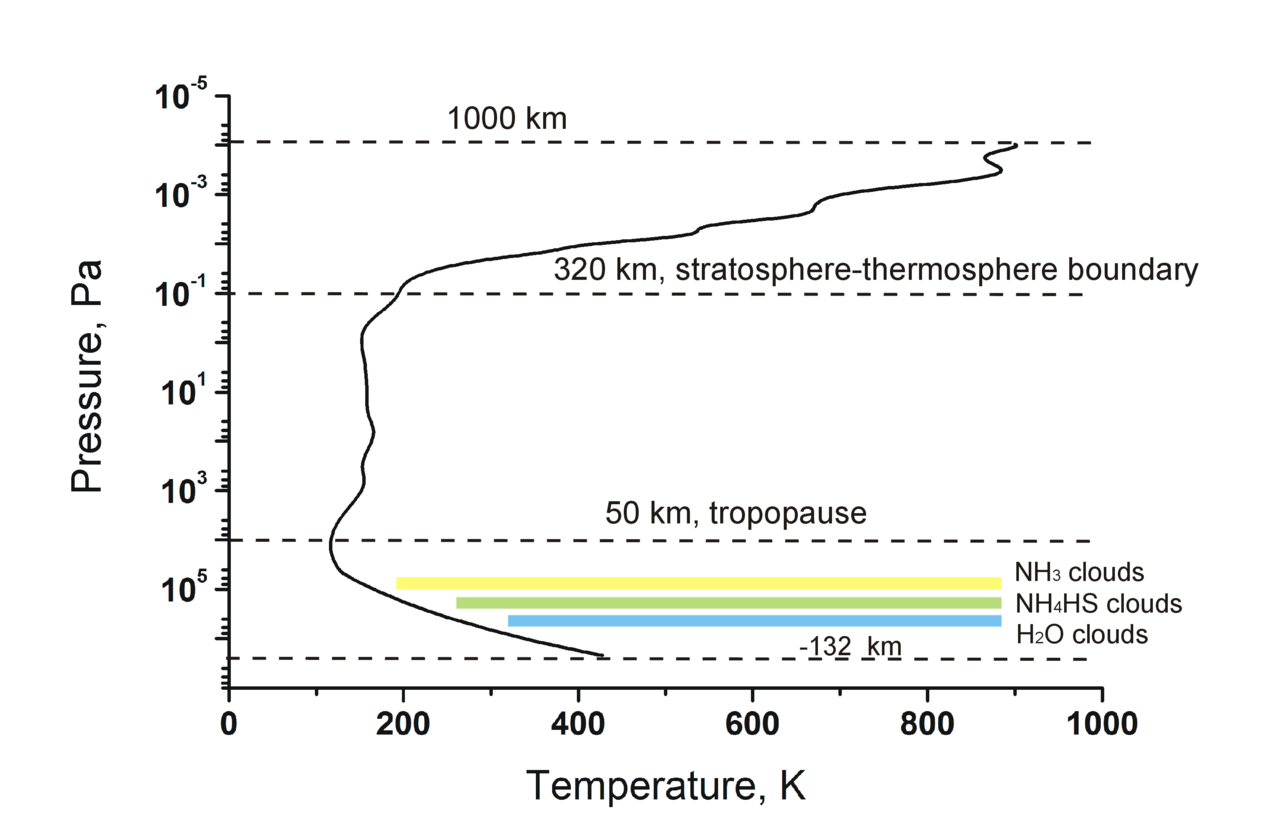 There are three distinct cloud layers of ammonia, ammonium hydrosulfide, and water. The temperature and pressure conditions seem to be surprisingly earth-like; temperatures between 200 and 300 K, pressures about 1 to 10 atm, gravity around 1.3g.

All three of the cloud forming compounds should be liquid at the conditions of their cloud layer. Given the density of those liquids (between 0.7 and 1.2 g/cm$^3$) and the density of the bulk of the hydrogen and helium atmosphere, how do the clouds not fall as precipitation into Jupiter's interior and never re-emerge?

and I'll add a similar, but slightly more detailed picture to the one you posted.

You're right that there is a clear difference between Earth's surface where liquid water can exist, evaporate, make clouds, rain and repeat. Earth's water cycle in theory, could go on indefinitely so long as Earth's atmosphere and the solar input are maintained (and lost hydrogen is replaced), but it's a circular system that only needs solar input.

Jupiter is different because over time, the heavier gases in Jupiter probably will sink deeper towards the center and Jupiter's cloud forming gases should decrease given enough time. Some of Jupiter's "rain" probably does fall too deep in its swirling mix of gases, and leaves Jupiter's cloud cycle permanently, similar to water seeping underground and leaving Earth's water-cloud cycle. So, in 100 billion or a trillion years or so, Jupiter could lose its clouds and cloud forming gases in its upper atmosphere for the reasons you suspect.

The reason this hasn't happened yet is simply mixing. While density of gas tends towards layers of increasing density, the internal heat inside Jupiter also wants to even out, so there's enormous convection going on pretty much all the way through the planet. This keeps some heavier gases in Jupiter's upper atmosphere. Jupiter's much too turbulent to have just hydrogen and helium in its upper atmosphere.

So, once we begin with the observation that Jupiter's upper atmosphere is (about) 90% hydrogen, 9% helium, 1% other gases and the mixing maintains the 1% of other, after that it's just cloud physics.

Clouds look like puffy collections of water vapor (tiny droplets of ice or water, as water vapor is actually transparent). They look like objects with shapes, but that's not entirely accurate. If you are up close to a cloud (flying in a plane for example), the clear edges disappear. A cloud isn't an object so much, it's a visible phase change.

Atmosphere on Earth is about 78% nitrogen, 21% oxygen, 0.9% argon and (usually not listed because it's so variable), about 0.4% water vapor on average, as high as 1% with high temperature and high humidity and close to 0% in cold temperatures or dry-deserts. When you take warm surface air that's 0.6-0.8% water vapor, and that air rises (as hot air does), it's the phase change that creates the clouds. The cloud forms in the hot rising air as it cools. There's some electrostatic attraction, but mostly it's just a block of similar air undergoing cooling and the cloud looks like it has solid edges, but it doesn't.

The same exact thing happens on Jupiter, different gases phase change at different temperatures/pressures, but the process is the same. And, just as on Earth, once the droplets or "icelets" form, they are denser and they begin to fall, but falling droplets are very small so they fall very slowly and for the most part, they are falling through rising atmosphere. Also, as they are a phase change, new cloud is being formed and old cloud is being disbursed or returned to gas all the time, kind of like sea ice. The clouds have the appearance of semi-permanence, but clouds are dynamic.

If my explanation doesn't work for you, here's an explanation on clouds and how they really aren't bound together even though they look that way.

But that's the gist of it, mixing keeps the upper atmosphere of Jupiter from being pure hydrogen and helium (or pure hydrogen), and after that, the cloud formation is pretty much the same as on Earth, just without a surface. Some of the heavier gases probably do get lost from the cycle, but the loss is slow enough that Jupiter still has some heavy clouds forming gases in its upper atmosphere and will for probably billions of years to come.

The greater density variation between H/He and other gases likely plays a role in how the clouds behave, as the density variation is greater, but the wind speeds are also higher on Jupiter. All that's really needed is mixing. After that, with gases that can become liquid or ice under temperature/pressure variations, the phase changes create the clouds.

It's also possible that Jupiter's cloud forming gases, from time to time, are replenished by asteroid and comet impacts. Shoemaker-Levy 9 was about 5 km in diameter and a fair percentage of that was probably ammonia and water ice. That's a lot of cloud forming gas added to Jupiter's upper atmosphere. Jupiter's faint ring system, which might have been much larger millions of years ago, but since rained onto Jupiter, and eruptions from Io might also play roles in keeping Jupiter's upper atmosphere rich enough in cloud making elements like water and ammonia.

How do the clouds not fall as precipitation into Jupiter's interior and never re-emerge?

Gases in a planet's troposphere don't differentiate chemically; the turbulence driven by heating and planet rotation keep the atmosphere well-mixed. We can see this in our own atmosphere. Carbon dioxide and argon are considerably more dense than are the nitrogen and oxygen that form the bulk of the atmosphere. Yet we don't have a layer of carbon dioxide at the bottom of the atmosphere. The turbopause marks where an atmosphere shifts from being dominated by turbulent mixing to being dominated by diffusion. Chemical differentiation by atomic mass does occur above the turbopause, but even there, it's gradual.

But what about rain? The answer is simple: It evaporates. That happens here on Earth, particularly in arid regions. Clouds form, and rain falls from those clouds, but the rain sometimes evaporates before it reaches the ground. This is called virga.

Temperatures rise inside Jupiter due to compressional heating, at a rate of about 1.85 K per kilometer of increasing depth. That means the temperature reaches the water's critical temperature (647 K) about 240 kilometers below the 1 bar pressure level. So even if rain water could fall that far as rain before evaporating (which is dubious), it would cease to be a liquid.

Not the answer you're looking for? Browse other questions tagged planet solar-system jupiter planetary-atmosphere gas-giants or ask your own question.

3
How did Jupiter form where it is?
3
Is Jupiter just a super earth with hydrogen atmosphere?
3
Terminology: planet plus atmosphere vs planet and atmosphere as separate things
2
Are the darker blue/black areas in this picture what the atmosphere of Jupiter looks like without clouds?
3
Helium rain inside metallic hydrogen within Jupiter, conditions and experiments?
1
How thick was Earth's primordial atmosphere?
5
Why is Saturn invisible in this radar image of its rings?
6
Is there a link between the amount of swirling and vorticity in a gas giant's atmosphere and its distance to its Sun?