Is an ice planet made only by Ice?

Is an ice planet made only by ice? What causes the water to conglomerate and form ice in a planet?

I heard about ice planets with surface temperature way above the melting point. Can it be explained with surface pressure? Edit: This is probably wrong but feel free to point it out in a full answer

There are several compounds referred to as 'ices' in the solar system, these are mostly hydrogen-based compounds such as water, ammonia and methane (and others) accreted around what is believed to be a rocky core, these compounds are important, as they comprise a great proportion of the two 'Ice Giants' observed in our Solar System (Uranus and Neptune), as seen in the diagram below, compared to the Gas Giants - Jupiter and Saturn: 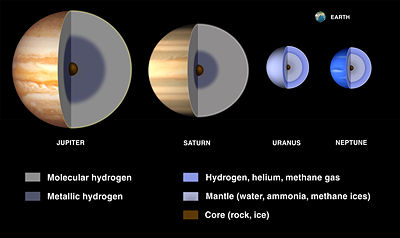 This answer will just mainly focus on the Ice Giants. as discussion of these answer both your questions regarding the ice planets and what is sometimes described as ices existing at high temperatures.

In terms of planets with proportionally large amounts of ice, as mentioned in the comments, there is a dividing line when the solar system formed known as the Frost Line, illustrated in the diagram below: 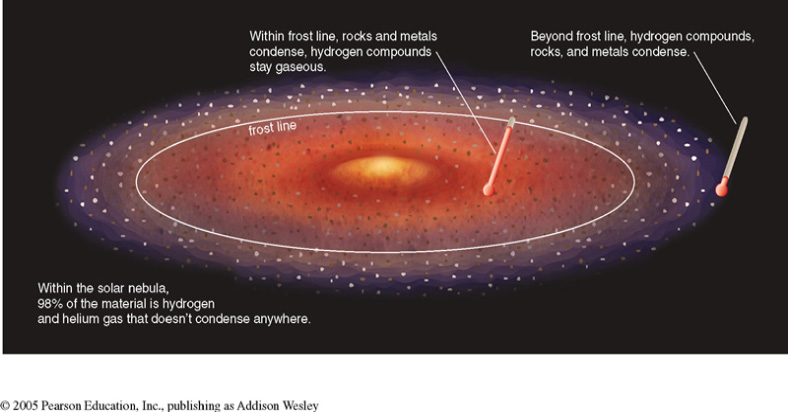 Inside the Frost Line, the hydrogen compounds remain vapourised, beyond the line, hydrogen compound ices can condense and solidify, as seen for Uranus and Neptune (and an array of dwarf planets, moons and other celestial objects), these 'ices' comprise the mantle of both planets. An important distinction about what these "ices" are is explained in the paper "The Interior Structure, Composition, and Evolution of Giant Planets" (Fortney and Nettelmann, 2009) as being:

The label ice refers to a mixture of $H_2O$, $CH_4$, and $NH_3$ that are supposed to have been in an ice phase during protoplanetary core formation.

The compounds in the mantle in the Ice Giants are under immense pressure (in excess of 10 GPa), far in excess of those existing on Earth. Greater pressures change the properties of the hydrogen-based ices - so it is one of the reasons that it is sometimes referred to as 'hot ice', according to the AstroTech Gallery page 'Ice Giant', describe a model of the Ice Giant planets as being:

Much of this mass (perhaps about 65%) is made up of hot ices, which despite being very hot are probably kept at least partially solid by the enormous pressures within these massive planets.

The effect of pressure on water (as an example) can be seen in the example phase diagram below (of course there would be differences depending on the actual nature of the mixtures and compounds present):

However, according to the article The gas (and ice) giant Neptune, the present icy (or 'hot ice') mantle of Neptune is described as:

The mantle is equivalent to 10 – 15 Earth masses and is rich in water, ammonia and methane. This mixture is referred to as icy even though it is a hot, dense fluid, and is sometimes called a "water-ammonia ocean".

A similar situation is hypothesised to exist for Uranus.

It is known that ice exist on Mercury, Earth, Moon and Mars, but these comprise a small proportion compared to the planet itself, so not included in this answer.

Not the answer you're looking for? Browse other questions tagged planet temperature or ask your own question.

19
How hot can a planet be?
51
What would happen if an ice cube is left in space?
9
Is it possible that only one hemisphere of a planet has an atmosphere?
2
Planet orbit circumbinary planet
1
Planet with acid ice caps
4
How to calculate the thickness of the ice crust on a frozen ocean planet/moon?
1
Difference of Gas Giant Planet and Ice Giant?