What is the period of unique horoscopes? In other words how long does it take before any configuration of the classical planets repeats?

Assume a horoscope is created by dividing the ecliptic into 12 equal regions and then for a particular day noting which region each of the 7 "wandering stars" is occupying relative to the earth. For example, a horoscope could be: Sun in Aries, Moon in Capricorn, Saturn in Taurus, Jupiter in Libra, Mars in Pisces, Venus in Aries, Mercury in Aries.

Since Saturn revolves around the sun once every 29 earth years, Jupiter every 12 years, and Mars 1.88 or so, multiplying together we have 654. So, relative to each, they would seem to repeat their configuration every 654 years.

This is potentially a complicated question which might require a simulation to determine the answer. For example, today (5 December 2016), the following is true for the tropical zodiac:

So, one instance of this problem would be to determine the next date at which this same configuration will next recur.

Important caveats below, but first, some notes:

suggest the vernal equinox was on July 12th about 15000 years ago (of course, no one actually used our calendar back then), which seems a bit off. Further, you'll notice:

suggesting the vernal equinox will occur on February 23rd (about a month early) 15000 years from now (assuming they continue using our calendar).

See https://astronomy.stackexchange.com/a/13009/21 for why this happens (my answer there has slightly different dates/times, because I used a less accurate model).

Note that this horoscope is probably only the most frequent because of how I chose the start and end dates (based on the DE431 ephemeris).

For Mercury and Venus, this no effect (no moons), and the Mars' system barycenter is within a few inches of Mars' own center (Phobos and Deimos have very little mass). Jupiter is fairly massive, so its system's barycenter is fairly close to its own center, and even the effect Titan has on Saturn isn't that great.

This was reasonably accurate in 56 BCE, but is certainly not true today as the vernal equinox is in Pisces and drifts towards Aquarius, heralding the "Age of Aquarius".

In the 30,000+ year period covered by my program, the first point of Aries makes a complete circuit (and a bit more) of the Zodiac, even ending up in Ophiuchus for a while.

EDIT: As I should have guessed, people have already done this: https://cafeastrology.com/astrologyof2017horoscopes.html (and I'm guessing there are many many other sites too, just google "Mercury enters Aries" "Venus enters Taurus" type stuff).

I hope to provide a better answer later, but for now: 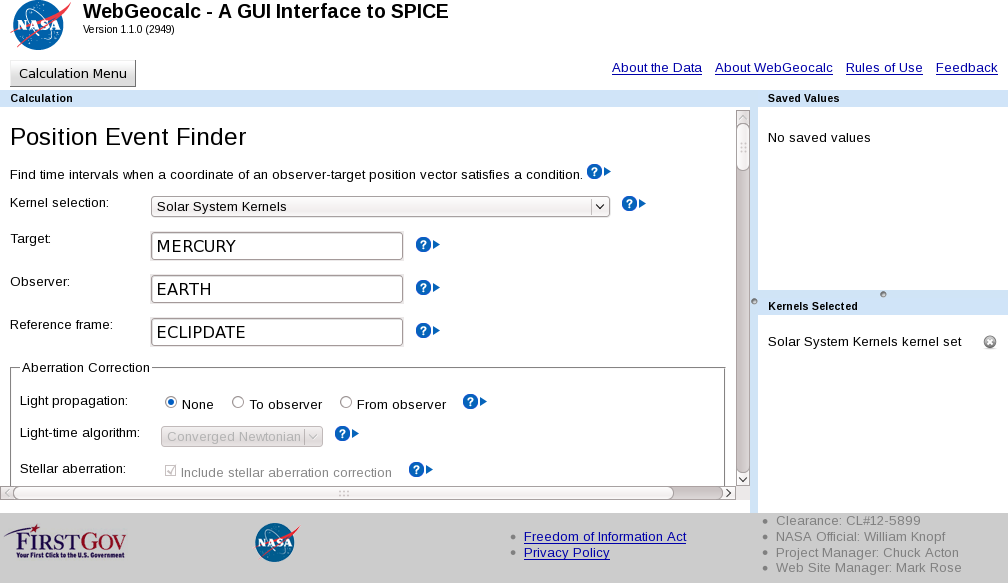 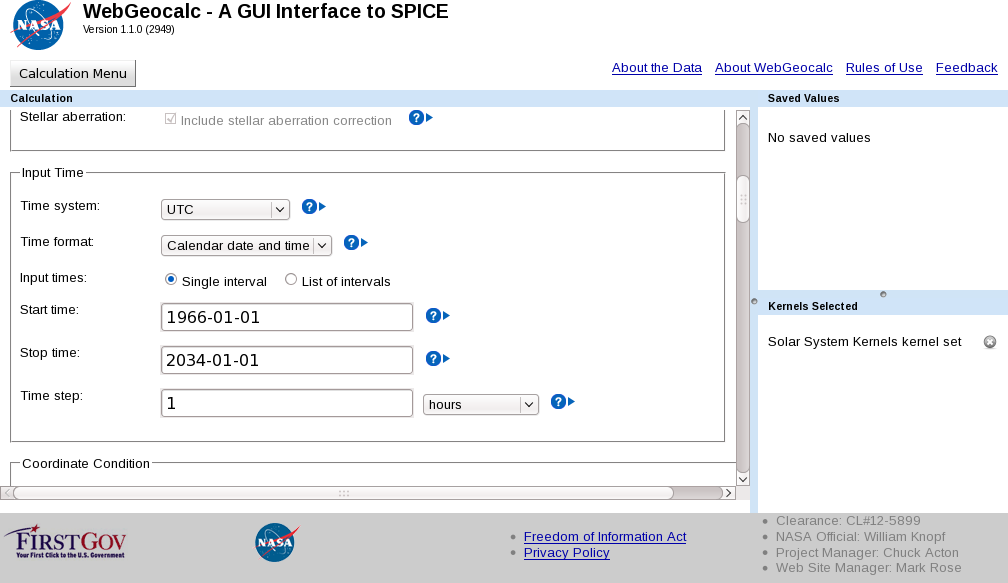 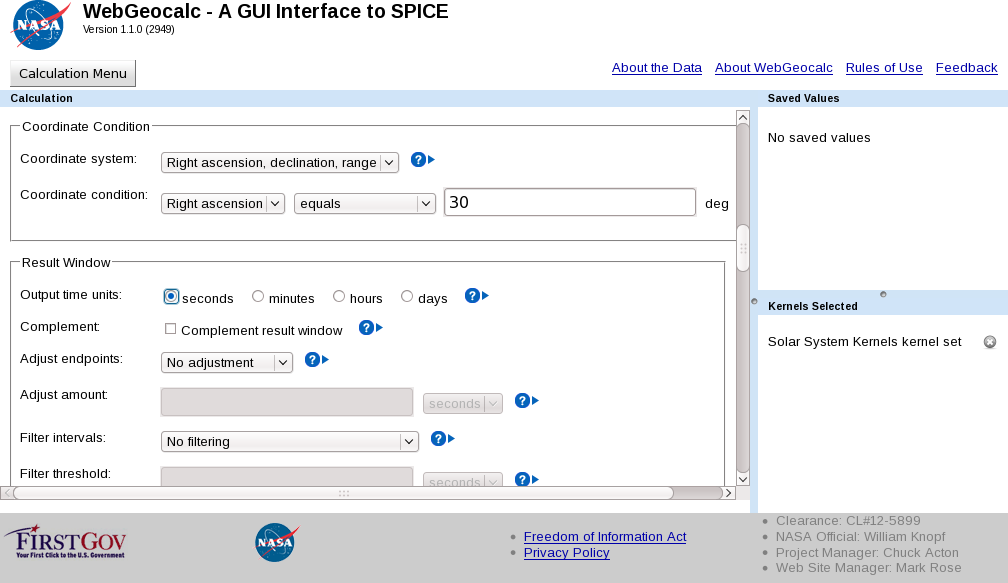 and click "Calculate". This will tell you every time Mercury has an ecliptic longitude of 30 degrees, the cusp between astrological Aries and Taurus.

If you do this for all 7 planets and every multiple of 30 degrees (12*7 = 84 times), you can use the results to see when the combination of constellations change. However, this is has several problems:

The "correct" way to do this is to use CSPICE (http://naif.jpl.nasa.gov/naif/tutorials.html) which lets you make calculations +- 10000 years from now.

Leaving that aside, let's check our results. If you scroll down a bit in the results window, you'll see: 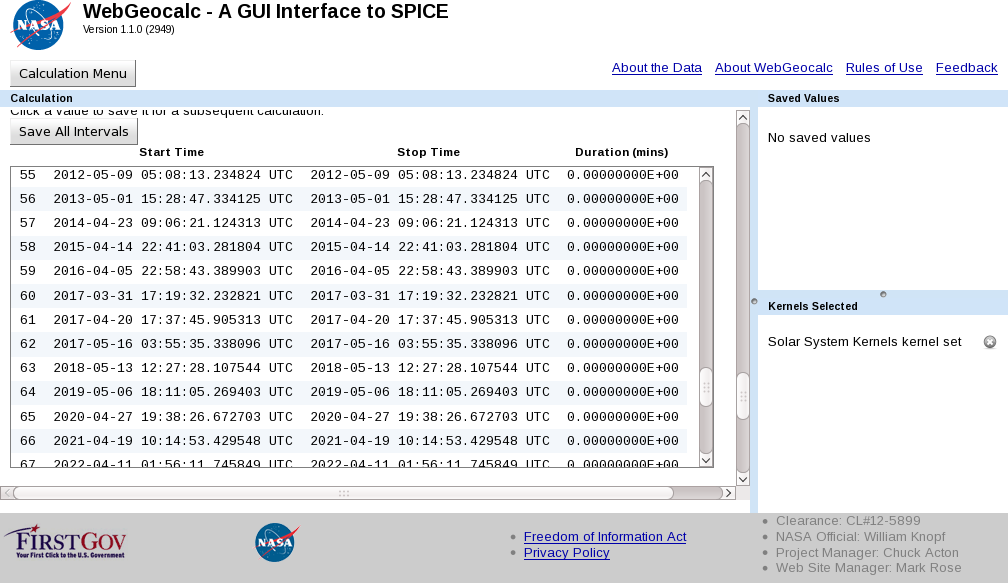 Let's check the result for 2017-04-20 by visiting http://ssd.jpl.nasa.gov/horizons.cgi and entering these parameters: 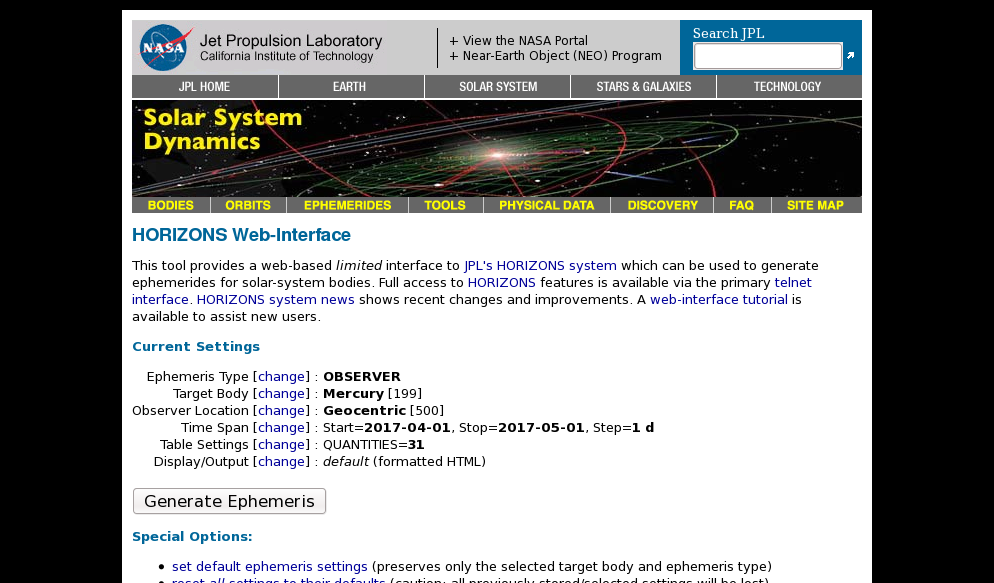 to get these results: 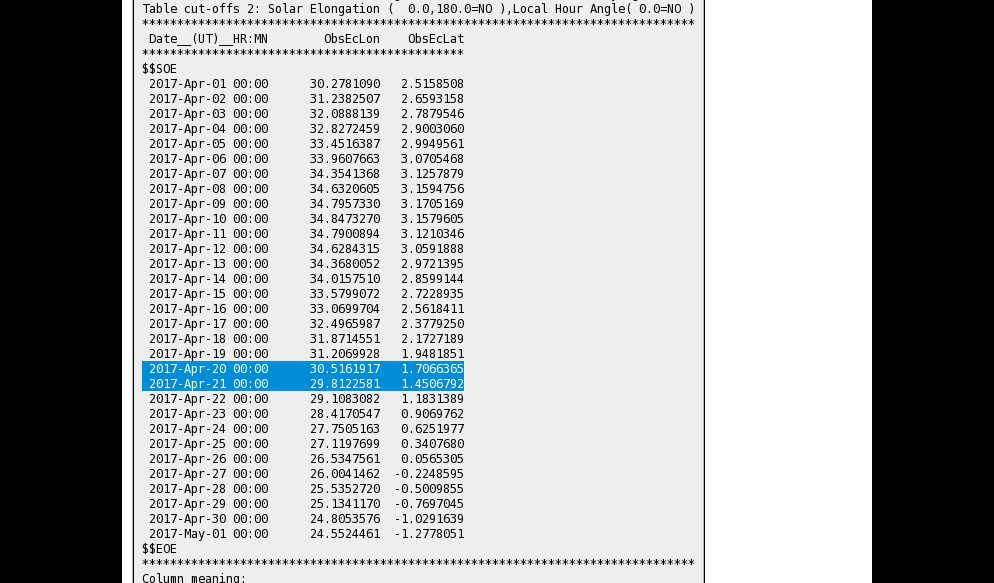 As you can see, Mercury's ecliptic longitude crosses 30 degrees between 2017-04-20 and 2017-04-21, so our results are reasonable. Interestingly, Mercury is in retrograde at this time, so it actually crosses from Taurus into Aries, not vice versa.

Not the answer you're looking for? Browse other questions tagged solar-system .

7
Are there accurate equinox and solstice predictions for the distant past?
0
How do I find the signs that planets are in during any given date?
-1
Why are there 12 zodiac signs?
-1
When can the Sun, Moon and the five naked-eye planets all be in Leo?

59
How many planets are there in this solar system?
2
How well do planetary orbits fit with Johannes Kepler's in- & circumscribed Platonic solids?
12
Why does each and every planet of our solar system have an unique axial tilt angle?
5
What is the orbital period of our sun around its barycenter?
4
What is wrong with my calculations of Venus' orbital period?
25
Why do planets and satellites in the Solar system look so wildly different if they came from more or less the same matter?
3
Are the planets Mercury, Saturn, Uranus and Neptune losing mass?
3
So, what, exactly, is a tropical period?
3
North Stars of each Solar system planet?
3
constant semi-major axes of the planets