Of course, I checked Wikipedia but I don't trust it very much :

but I don't find clear final and consensual values in this paper.

Help would be appreciated. Please state your sources.

Cosmological parameters are measured in a variety of ways, and their values will depend on which measurements you trust the most. The paper you link to (Planck Collaboration et al. 2016) with the 2015 results from the Planck observations of the cosmic microwave background is probably the one that most people will accept, but even in that paper you will find different values, depending on which observables you combine.

You will find the values in their Table 4. I think that most people use the values in the column called "TT+lowP+lensing" (e.g. Geil et al. 2016, Ricotti et al. 2016, and Liu et a. 2016), which is the "conservative" choice. However, you'll also find some (e.g. Chevallard & Charlot 2016 and Silk 2016) who use the values in the last column, called "TT,TE,EE+lowP+lensing+ext". These values takes into account external data (baryonic acoustic oscillations and supernovae data), which reduce the uncertainties, arguably to unnaturally small values. The TT, TE, TT, and lowP refer to the polarization maps used, and "lensing" to the weak gravitational lensing measurements by Planck.

The table below is a modified version from the Planck paper where I show only the most used parameters: 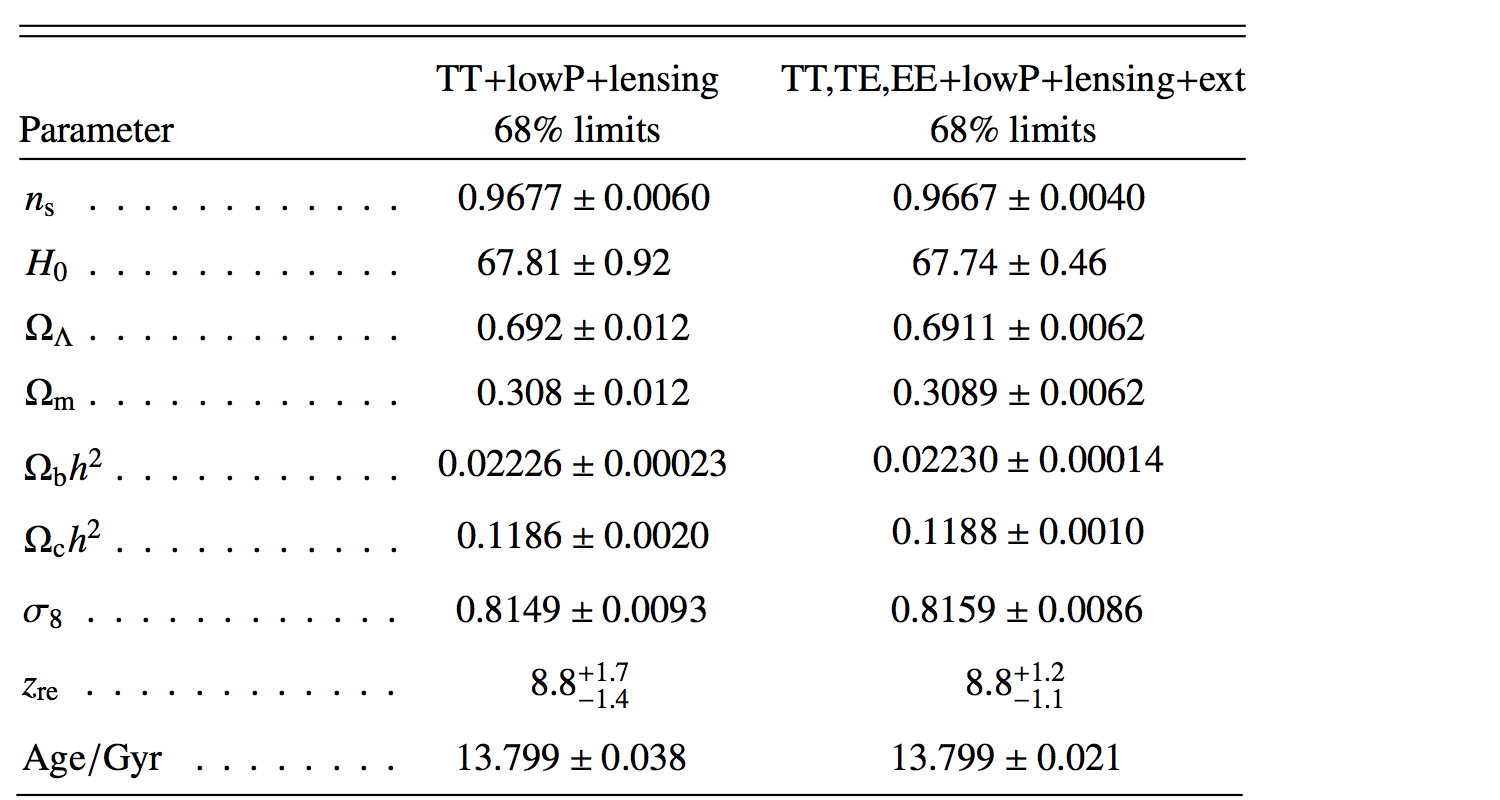 Here, $n_s$ is the slope of the primordial power spectrum, $H_0$ is the Hubble constant in km s–1 Mpc–1, $\Omega_\Lambda$ and $\Omega_m$ are the density parameters of dark energy and total (dark+baryonic) matter, $\Omega_\mathrm{b}h^2$ and $\Omega_\mathrm{c}h^2$ are the density parameters of baryonic and dark matter, multiplied by the factor $h \equiv H_0/100$ (squared), $\sigma_8$ is the matter density fluctuations on scales of 8 (comoving) Mpc, $z_\mathrm{re}$ is the redshift at which the Universe was reionized (assuming instant reionization), and the last row shows the inferred age of the Universe in billion years.

The constraints on the curvature parameter $\Omega_K$ is given in Table 5, which has somewhat different combinations of data. All in all, Planck constrains the curvature to $|\Omega_K| < 0.005$, but you will rarely offend anyone by simply setting the curvature to zero.

For curvature, I would use 0 (especially because your calculations probably would need to switch between ordinary and hyperbolic trigonometry depending on the sign), but if you do want to include uncertainty, you can say $\Omega_K=0\pm0.005$ (95%). Or, you could simply use $\Omega_K = 1 - \Omega_\mathrm{m} - \Omega_\Lambda - \Omega_\mathrm{rad}$ and propagate the errors to get $\Omega_K = 0\pm0.017$, which will give you a more conservative value.

For radiation, to propagate uncertainties you would have to know the covariance matrix of the input parameters, but since the total error is dominated by that of the Hubble constant, standard error propagation $(\sigma_{\Omega_\mathrm{rad}}/\Omega_\mathrm{rad} \simeq 2 \sigma_h/h)$ yields a value of $\Omega_\mathrm{rad} = (9.0513\pm0.2456)\times10^{-5}$.

Not the answer you're looking for? Browse other questions tagged universe cosmology general-relativity dark-matter hubble-constant or ask your own question.

6
what is a Friedmann model?