Have we Observed Continuum Emission from Neutron Stars?

Have we detected continuum optical emission from any rotating neutron stars that do not have an accretion disk dominating the light? I ask because I know we have observed Doppler broadening of spectral lines from the rotation of even ordinary stars rotating at ordinary rates, but it seems to me that only the rapid rotation of a neutron star would be fast enough to make the Doppler broadening of the thermal continuum peak to be observable.

Yes - quite a few isolated neutron stars have been observed, where any magnetospheric emission or accretion-related emission is either negligible or has been otherwise separated.

As you suspect, this emission is thermal in nature. Neutron stars are roughly approximated by black bodies but, like "normal" stars, they do have atmospheres and strong magnetic fields that modify the black body spectrum considerably. If the neutron star is isolated then the only reason that you might be able to detect thermal emission from the surface is that it is very young (less than about a million years after formation) and still hot. The difficulty is in ruling out any residual, pulsed magnetospheric component or a contribution from accretion of the interstellar medium itself.

A couple of examples to look at in the optical part of the spectrum would be Kulkarni & van Kerwijk (1998) who detected optical radiation from the counterpart to RX0720.4-3125; and Walter & Matthews (1997) who claimed a detection of thermal optical emission detection from the isolated neutron star RXJ185635-3754 (and see picture below).

Of course if you are extending your definition of continuum emission to include non-thermal (but not accretion-related) processes, then continuum emission is detected from all isolated pulsars. Synchrotron radiation is a continuum process and has been detected right across the electromagnetic spectrum in many pulsars. 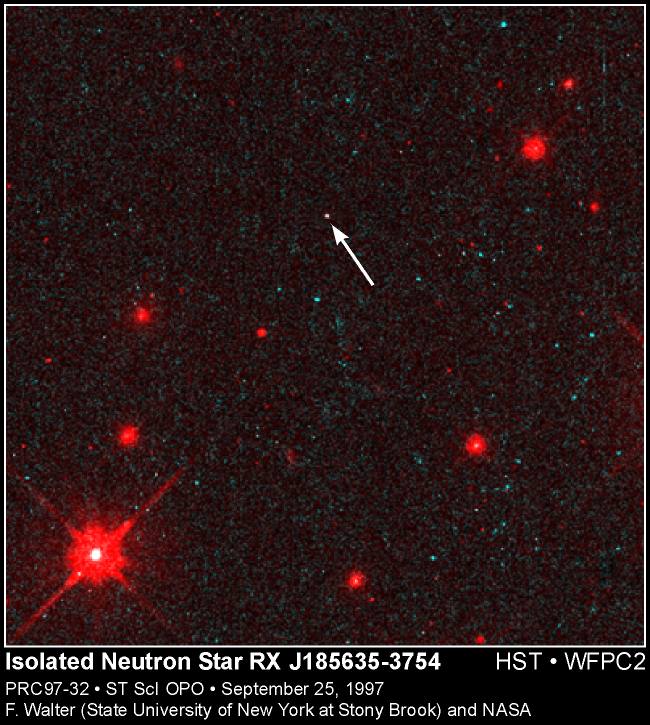 Not the answer you're looking for? Browse other questions tagged spectroscopy neutron-star special-relativity or ask your own question.