How the position of this black hole known?

How do scientists know the positions of black holes?
Observe the highlighted area in the image: 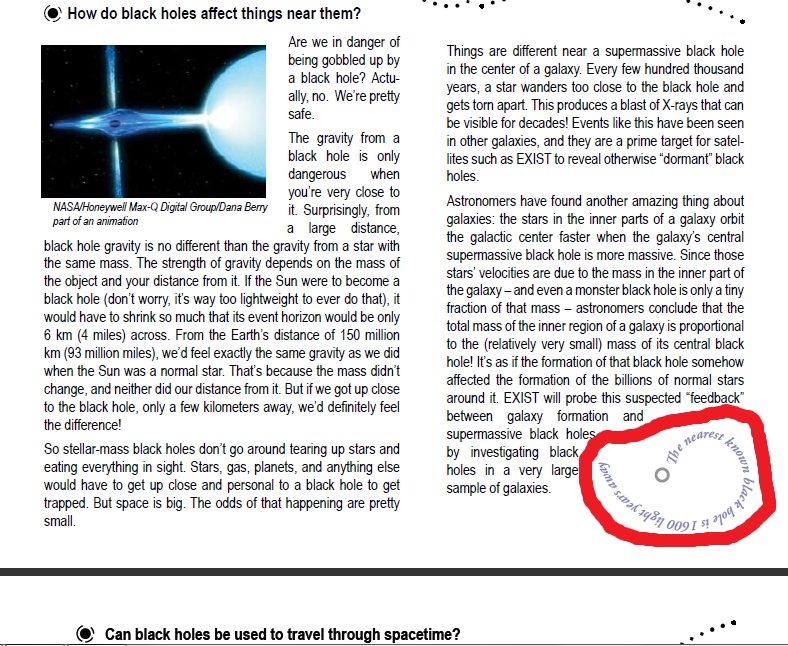 The article is referring to the black hole known as V4641 Sagittarii. It was originally thought to be the closest known black hole to Earth, at 1,600 light-years (0.5 kiloparsecs). It's a binary system which emits X-rays. Original distance measurements were made based on observations during and following an X-ray outburst in 1999. Analysis of the jets emitted and of the inclination of the system led to initial estimates of $0.4$-$1.7\text{ kpc}$ (see Hjellming et al. (2000)), with lower estimates of around $\sim0.5\text{ kpc}$ being favored - the distance that was then commonly quoted.

Later spectroscopic measurements in more detail appear to show these early observations to be incorrect, as Orosz et al. (2000) found. By observing the orbits of the two objects in the system, their masses were determined, which led to an estimate of the companion star's radius. The temperature of the star was determined by examining its spectrum, and its luminosity was computed from this and the radius. By using the color index and taking into account interstellar extinction, the group was able to calculate the distance to the companion star, and thus to the black hole. They found $7.40\leq d\leq12.31\text{ kpc}$, values closer to the currently accepted distance.

General black hole detection is discussed in the answers to How are black holes found?. The takeaway for this case - a stellar-mass black hole in a binary system - is that effects from the companion star must be observed and measured. Fortunately, there are typically plenty of ways to choose from.

41
How are black holes found?
11
How far away is the nearest compact star remnant likely to be?

10
How is a non-rotating black hole created
3
How loud would a black hole be?
2
Is this a Black Hole?
1
Why is the ring of light around the M87 black hole bigger than the photon sphere?
0
Control the behavior of a Black Hole
29
Why does the 70-solar-mass black hole in the LB-1 system challenge current astrophysics?
4
How can a black hole merger create a black hole with an event horizon surface area larger than the sum of the two original areas?
2
Pressure and chemical potential of quantum Schwarzschild black hole