What causes the abundance of dust to 'float' in the thin lunar atmosphere?

Several missions to the Moon have revealed a lunar horizon glow, such as the ones seen below by the spacecraft Surveyor 7 in 1968:

According to the NASA article "Model Helps Search for Moon Dust Fountains" written in 2010 suggests the cause of the phenomenon is due to sunlight shining through a dust layer suspended in the very thin atmosphere (exosphere) of the moon. From the NASA webpage:

"It has been suggested that electrostatic forces play a role in the ejection of dust from the lunar surface, and its dynamics in the atmosphere, but we really don’t understand how it gets there in such high abundances."

Given that there is no wind or precipitation in the lunar sky, my question is:

What causes the abundance of dust to 'float' in the thin lunar atmosphere?

A recent study in Geophysical Research Letters — "Dust charging and transport on airless planetary bodies" (Wang et al. 2016) and reported in the ScienceAlert article "NASA just explained why Moon dust is 'levitating' above the lunar surface" — seems to explain the phenomenon through laboratory simulation experiments which observe what occurs when micron-sized dust is exposed to ultraviolet (UV) radiation or electrically-charged gases known as plasmas.

From these experiments, the researchers observed that:

In both cases, the dust particles would leap several centimetres above the surface.

The experiment observations can be seen below: 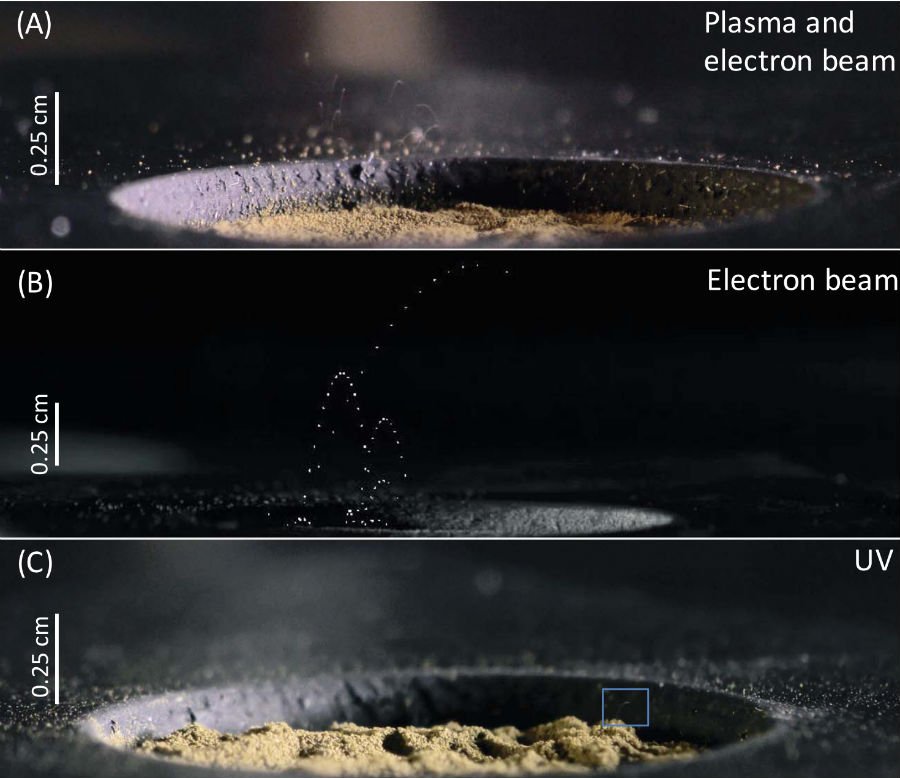 Thus, one can conclude that on the Moon light would scatter through these levitating particles to create the horizon glow.

The mechanism behind the 'levitation' is stated as being:

This is due to the reaction [with the plasma and UV light] causing an emission and re-absorption of electrons inside 'micro-cavities' formed between neighbouring particles, which can generate unexpectedly large electrical charges and intense repulsive forces.

These forces cause the dust particles or clusters to lift off the surface, or 'levitate'.

Although the effects are observed with the lunar horizon glow, the researchers expect that effect would cause a suspension of dust across the entire lunar surface to some degree.

A significant implication of this research is stated in the NASA article "Dust “Floats” Above Lunar Surface: Electrostatic Dust Transport Reshapes Surfaces of Airless Planetary Bodies" as:

The laboratory observations also showed dusty surfaces becoming smooth as a consequence of dust mobilization. These electrostatic dust processes could help to explain the formation of the “dust ponds” on asteroid Eros and comet 67P, and the unexpectedly smooth surface on Saturn’s icy satellite Atlas.