If earth changed its orbit, what would happen to the moon?

Let there be an accelerating force acting on earth over an arbitrarily long time to change its orbit around the sun (e.g. by asteroids repeatedly passing by close to earth (intentional or not) or whatever). For this question consider only the effect of earth's gravity on the moon (and vice versa), not other influences (e.g. not the immediate effect the asteroids passing by have on the moon's orbit).

If such perturbations are weak enough yet of sufficient duration to change earth's orbit around the sun, how does it change the moon's orbit around earth? My considerations: 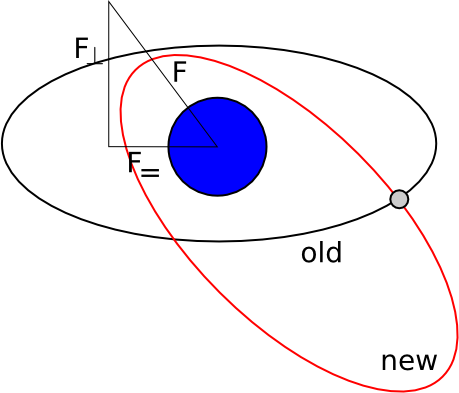 Since the moon remains in orbit around earth even as the earth goes around the sun there obviously is some lower limit to how fast earth can accelerate. However, that force wanders around earth once a year, hence its effect on the moon's orbit is evening out - and the effects from the sun are supposed to be ignored here, anyway, so let's have the force go in a constant direction.

$F_=$ will cause the moon's orbit to become very elliptical, the moon passing closer on the side toward which earth is accelerated and being further away on the other side. If the force is indefinitely sustained something will happen to the moon, but under which circumstances will which scenario happen?

Aside from the fact that it's 81 times easier to move the Moon than the Earth, so, in such a scenario, the Moon could be moved too with an extra 1.23% of time/money/energy, so, it really would make sense to move them both, not just move the Earth and risk losing the moon or worse, crashing into it.

But (lets credit the need to save 1.23% to a congressional budget committee) and just move the Earth, as you propose. Would the Earth lose the Moon? . . . It depends, but not necessarily.

The first, idea to get out of the way is that there's no gravitational string connecting the Earth and Moon, so if the Earth was accelerated fast enough (say, launching millions of very high velocity rockets off the same side of the earth at the same time) there's no attachment that would pull the Moon with the Earth. This is one of those scenarios where the rubber sheet analogy works quite well. Accelerate the Earth and the corresponding gravity well moves away from the Moon and the Moon moves corresponding to the decrease (or increase) in the slope of Earth's gravity well, so the Moon's velocity carries it relative to the new slope. But that's the argument for a single acceleration. For multiple gravity assists, you have to account for the moon being in different positions so the relative movement wouldn't all be in the same direction.

Asteroid Gravity Assist - how close to the Earth?

A passing asteroid would affect both the Moon and the Earth, but for optimal Earth movement, you'd want it pass within, say, a few thousand KM of Earth's surface, outside of the atmosphere but much closer to the Earth than the Moon, where it's gravitational tug on the Earth would be over 1,000 times the tug on the Moon at closest pass. The entire path wouldn't be a 1000 to 1 ratio, but with a close enough pass we can effectively say the Asteroid is giving the Earth a much larger gravitational tug, where the tug on the Moon is somewhat negligible. In effect, moving the Earth's orbit but not moving the moon's orbit nearly as much.

Asteroids passing that close would be inside the Roche limit and probably would begin to break apart, but that wouldn't change the gravity assist or be a problem for the Earth if the velocity was sufficient to pass through and not remain in a near-Earth orbit.

To change the Earth's velocity that much, with a single asteroid pass, you'd need that asteroid to be, (if my math is right), a few times the mass of the Moon, and an object with that mass passing within a few thousand KM over the Earth's surface, lets just say that would be a bad idea for a number of reasons. - so, it's better to do it the way you suggested. Many asteroids, over a long time.

Many asteroids - what would happen to the Earth-Moon system

Each asteroid, passing within a few thousand km of Earth would move the Earth slightly, but as the Moon moves around the Earth, many of those movements would cancel out. They would move the Earth towards the Moon when the Moon was on the same side of the Earth as the asteroid, and away from it when the Moon was on the opposite side. Similarly, eccentricity could be increased or decreased. There's no one answer as to whether the Earth would lose the moon without adding up the position of the moon and averaging it out. Moving the Earth could be timed, where, in effect the Moon would be carried along with it. This works both ways too. We could move the Earth's orbit by properly timed thrusters or explosions on the surface of the Moon, sometimes moving the Moon away from the Earth, sometimes closer, but gravity assists are probably easier with less energy involved, as Jupiter could be used to accelerate the asteroids, which would reduce the energy input needed.

The net effect is that you can move the Moon with the Earth, or the Earth with the Moon, but pushing on just one of them. That's possible with gravitationally bound objects.

So, depending on the timing of the asteroid gravity assists, you could create any of your four scenarios, but without specific timing, there's at least a pretty good chance the Moon stay with the Earth. The 2nd scenario, the Moon getting tidally torn apart, that would only happen if it got very close to the Earth.

Not the answer you're looking for? Browse other questions tagged gravity earth the-moon .

6
Does the Giant Impact Hypothesis explain how the Moon circularized its orbit?
4
How large could a second moon of Earth be?
2
What would happen to the solar system if Earth's mass was removed?
2
How come the Sun does not make the Moon crash on the Earth?
3
Did the Moon ever approximate a geosynchronous orbit above the early Earth?
11
Why is there no concavity in the orbit of the moon around the Sun?
2
What would happen if the Sun, Moon and Earth were isolated?