Is "Giga-hertz Astrophysical Transient Emission" distinct in any way from "Fast Radio Burst"?

In this answer I have just read about The University of Texas Rio Grande Valley's The Spacecraft Tracking and Astronomical Research into Giga-hertz Astrophysical Transient Emission (STARGATE).

While Fast Radio Bursts (FRBs) seem to fit that description spot-on, I am wondering if the phrase was chosen to be in some way broader or more general than FRB to include other phenomenon, and if so, have there been any Giga-hertz Astrophysical Transient Emissions observations that are not also considered FRBs? 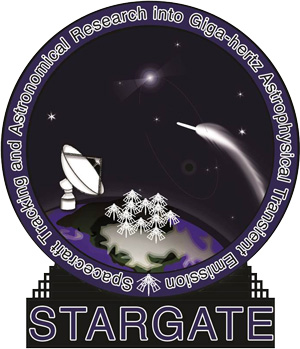 above: Logo of The University of Texas Rio Grande Valley STARGATE program.

I am going to float this as a tentative answer. I'll appreciate feedback, either validating it or letting me know it's wrong, in which case I'll delete it. If it is part of a better answer, please run with it and I'll also delete this.

X-ray navigation XNAV is being look at as a source of navigational data for spacecraft in deep space that does not require measurements and telemetry from a deep space facility on Earth. While a spacecraft could not easily receive radio pulses from a pulsar without a very large antenna to overcome the thermal noise in the receiver's front-end, a suitable X-ray detector could potentially build up timing data from several pulsars.

Since a spacecraft is usually moving without thrust under gravitational forces from known bodies, an instantaneous fix is not needed and data could be collected for several minutes or even longer.

While radio pulses from pulsars are generally periodic, there are transient phenomena that can be related to infall of ionized material interracting with the magnetic field causing bumps and wiggles of individual radio pulses, which may have a bearing on X-ray time structure as well.

And so I am speculating that these transient deviations in a Pulsar's otherwise regular behavior would be of relevance to technology development for both deep space exploration and business development.

However, while intermittent download of data from spacecraft could be considered Transient GHz Emissions, it would not be considered Astrophysical.

NOTE: The variability is in the production of electromagnetic radiation in a pulsar's incredibly intense magnetic field (radio) and at the surface (X-ray) produced during the infall of matter along the field lines towards the magnetic poles. The underlying rotation of the neutron star and it's field are still quite regular.

3
Just how fast is a Fast Radio Burst thought to be?