Is cosmic shear generally agreed to have been observed?

A review by Martin Kilbinger, 2015 says:

Cosmic shear is the distortion of images of distant galaxies due to weak gravitational lensing by the large-scale structure in the Universe. Such images are coherently deformed by the tidal field of matter inhomogeneities along the line of sight.

As a rough analogy: imagine looking at an image full of galaxies through a rippled piece of glass. While a circular lens might make a galaxy look smaller or larger, a ridge would have a preferential direction of magnification, and the galaxies under that ridge would have a statistical tendency to have slightly different sizes on average parallel vs perpendicular to the ridge.

Is such a phenomenon generally agreed to have been observed yet? Are there any plots (of any kind) that show such experimental data?

If I take this rough analogy one step further, while the peaks and troughs of the ripple magnify and demagnify, the midpoints between would be more prismatic - they would tend to deflect the centers, or locations of objects systematically, rather than affect the shapes. Applying this to cosmic shear, wouldn't the existence of shear essentially suggest that - to put it simply - stuff is, in fact, "not quite" where it appears to be? 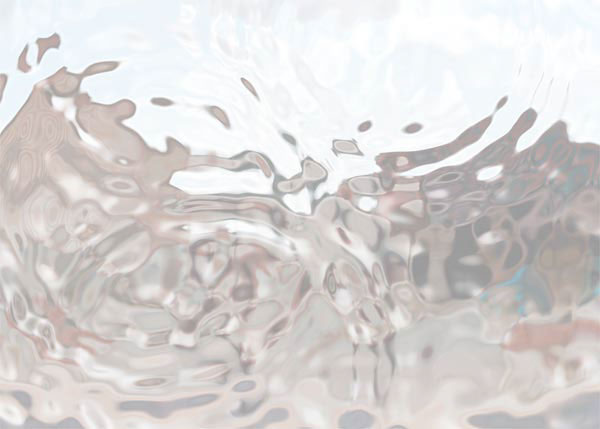 above: from Free Ripple and Frosted Glass Overlays, Bojan Živković.

Yes it has been observed. There are numerous papers covering this concept. Before I get into weak-lensing (because that is what you reference in your question) I'll note that cosmic shear is simply a specific type of distortion of an object by a lensing event. It is not limited to the weak lensing regime and cases of strong lensing exhibit cosmic shear as well. So images like this one show cosmic shear.

As far as cosmic shear by weak lensing goes, the first published and recorded case of a weak lensing measurment was in 1996 and published by Brainerd, Blandford, & Smail (1996). The cosmic shear you speak of is referred to as polarization in that paper, but they're essentially trying to measure cosmic shear. Note also, while this is weak lensing, most of that lensing occurs by one galaxy lensing another. As such it is also termed galaxy-galaxy lensing.

Since the first detection, there's been steady, but limited work on galaxy-galaxy lensing and shear measurments by papers such as Mandelbaum et al. (2006), van Uitert et al. (2011), and Velander et al. (2013). I think the Velander paper is the latest and greatest measurements you can get and they have a lot of good material in there. Because you requested an image, I'll pull out one from this paper. 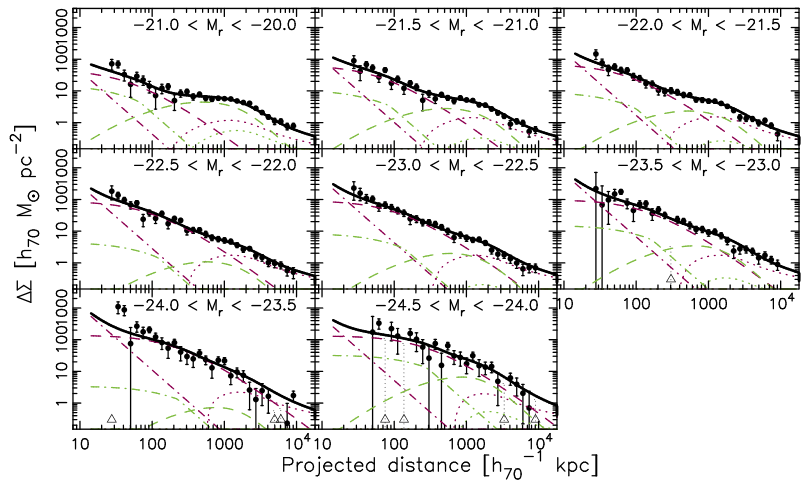 Caption: Galaxy-galaxy lensing signal around red lenses which have been split into luminosity bins according to Table 1, and modeled using the halo model described in Section 3.2. The black dots are the measured differential surface density, $\Delta \Sigma$ , and the black line is the best-fit halo model with the separate components displayed using the same convention as in Figure 3. Grey triangles represent negative points that are included unaltered in the model fitting procedure, but that have here been moved up to positive value s as a reference. The dotted error bars are the unaltered error bars belonging to the negative points. The grey squares represent distance bins containing no objects.

Note that in this paper, they're ultimately trying to measure the tangential component of the cosmic shear (you can't measure the radial component), denoted by $\gamma_t$ and by equation (1) in their paper, they relate this to the surface mass density $\Delta \Sigma$. So in their plot above, when they say they're measuring $\Delta \Sigma$, they're really measuring $\gamma_t$ and converting through a multiplicative constant.

The limiting factor in progressing further in this field is the lack of detailed observations required to do a true cosmic shear measurement. Since this measurement can only be observed statistically and not directly, you need observations of the sky which are both deep and wide. It is hoped that the WFIRST satellite will provide these measurements and thereby expand ten-fold the weak lensing work astronomers can do which in turn may some day allow us to make important statements about the content, distribution, and properties of Dark Matter.

30
If dark matter bends light, how do we know the stuff in the sky is where we think it is?
2
Lightest object so far to function as gravitational lense?