What is the range of percentage mass of parent star left in a stellar black hole directly after its formation?

What factors determine this number for a specific case?

There is no general consensus on this. Different evolutionary models give different results. The factors (in addition to the initial mass of the star) that effect the final black hole mass would be the rotation rate of the progenitor, its composition (or metallicity) and whether it was in a binary system or not and whether that binary system was able to transfer mass.

Rotation is thought to be important because it affects internal mixing and therefore the rate at which fuel is supplied to the core and the rat at which processed material gets to the surface, affecting the atmospheric composition. It can also enhance mass loss.

The composition is important because mass loss is driven by radiation and radiative opacities are higher for high metallicity compositions.

A set of calculations by Heger et al. (2003) are one of the canonical works on this subject. Below is a plot of initial mass versus remnant mass for stars with big bang primordial abundance (zero initial metallicity) and then the same again for stars of solar metallicity.

The ratio of the red line to dotted "no mass loss" line gives the fraction you are after. In zero metallicity (primordial) stars it increases from 10-40% for initial masses of 25-100 solar masses and is perhaps even higher for supermassive population III stars. (I stress that these are theoretical results).

For solar metallicity stars the results are a bit different. The ratio of the red line to the dotted line varies from 10-25% for 25-40 solar masses, but then it is not clear whether black holes can even form at even higher masses because of the much higher mass loss rates (see the difference between the dotted line and the blue curve). 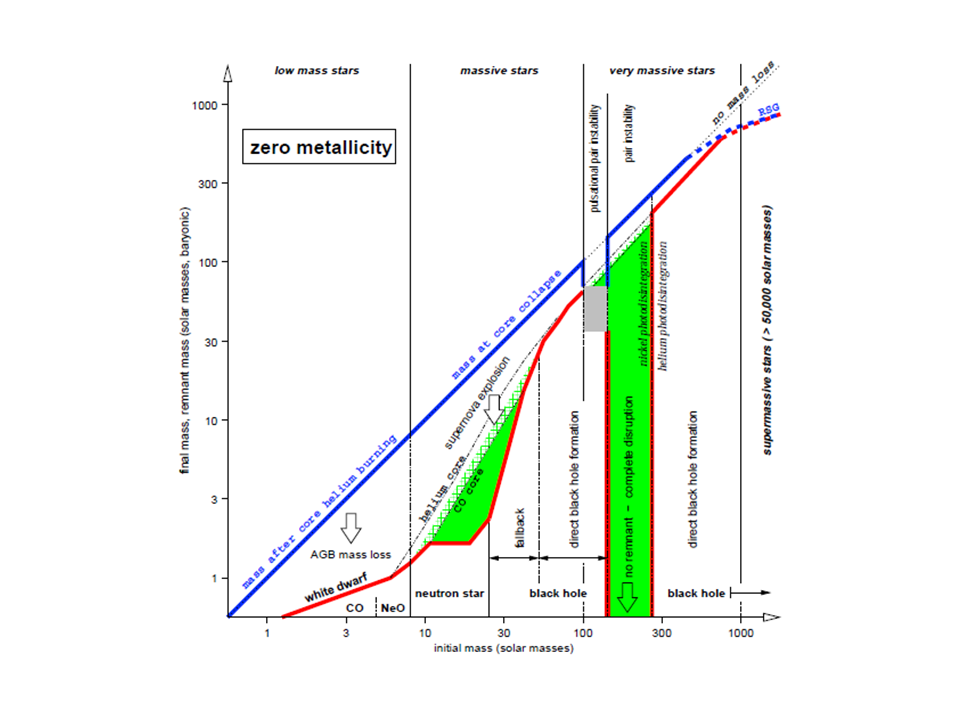 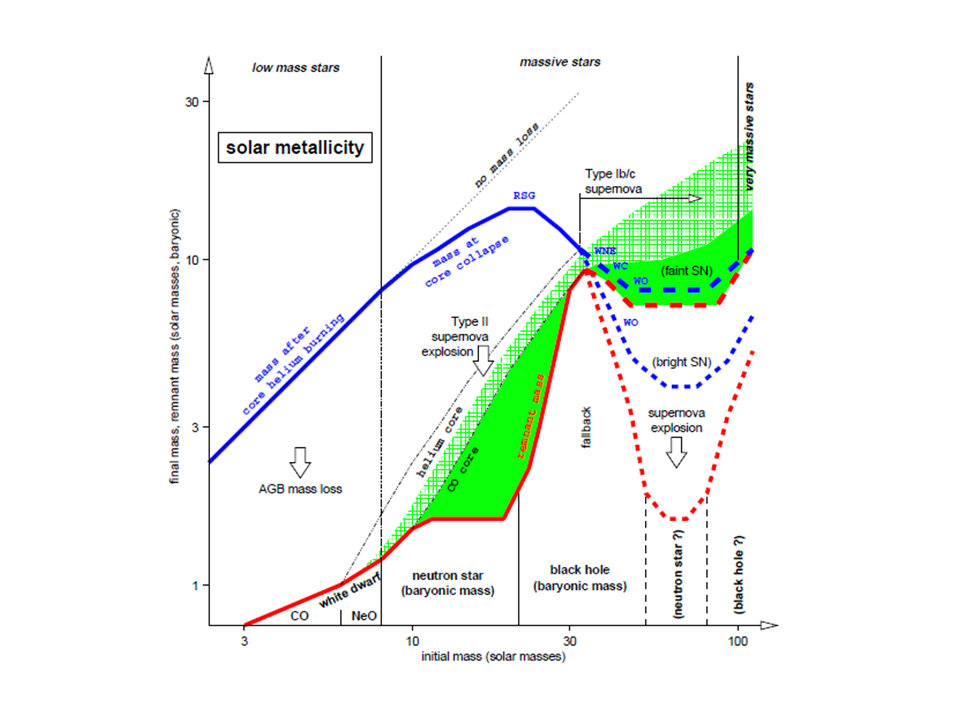 Your question regards the formation of stellar-mass black holes, which form as the result of a Type II or Type Ib supernova explosion. This occurs when a massive star's core collapses from its own self-gravity, driving a rapid release of energy through nuclear reactions. This imparts a tremendous amount of energy in the form of photons and neutrinos to the rest of the star, which, as a result, blows the star up. This core region either becomes a neutron star or, when the mass of this core region is high enough, collapses directly into a black hole. While stars that can explode through this channel are rare in the Milky Way, i.e., compared to stars like our Sun, there are likely ~billions of neutron stars and stellar-mass black holes that have formed through this process.

Stars that explode as supernova are indeed massive, weighing in with masses at least ~8 times the mass of the Sun. Those that produce black holes in the center are even higher, usually above ~20 solar masses or so (this number is disputed... some of the nuclear physics in these extreme environments is uncertain).

Figure 2 of this paper might shed some light (...) on your question. This paper ran a set of stellar evolution models to track how much mass was expelled during the explosion and how much mass remained post explosion. The horizontal axis gives the original mass of the star (in units of the Sun's mass, e.g., a value of 10 means 10 times the mass of the Sun), and the solid circles identify the final mass of the leftover remnant--which is either a neutron star or black hole. The vertical axis gives the mass of the remnant. Sadly they decided to use logarithmic space for the vertical axis, even though the range is only over a single order of magnitude. So to get the actual amount of mass, you have to undo the base-10 logarithm. For example, if a black dot had a value of 0.3 on the vertical axis, the mass of the remnant would be 10^(0.3) = 2.0 times the mass of the Sun. A value of 0.6 would be 10^(0.6) = 3.98 times the mass of the Sun, etc. They considered several different mechanisms for the explosion at higher masses (remember, things get more uncertain the bigger the star gets), which is why some horizontal values have multiple black dots. If you're curious, weaker explosions can allow some of the material to fall back down onto the remnant, which results in a black dot that is higher up on the plot.

Regardless, you can see that, for example, a 20 solar mass star creates a 10^(0.3)=2 solar mass remnant. A 30 solar mass star might create a remnant that is between 2 and 4 times the mass of the Sun. In all cases, the majority of the star's original mass is lost.

You might also glance at the plots of this paper as well. This paper looks like it did a slightly more careful job. Either paper still gives you the basic picture, however.

(Aside: Figure 2 is for 'solar metallicity' stars, which means 'stars that you might find in the Milky Way.' Figure 1 is for stars that would have formed in the early Universe, before a considerable amount of elements beyond helium had been formed.)

Not the answer you're looking for? Browse other questions tagged star black-hole mass stellar-evolution or ask your own question.

1
Are black holes different sizes thanks to the different sized stars that created them?
29
Why does the 70-solar-mass black hole in the LB-1 system challenge current astrophysics?

3
What is a low mass Black Hole?
5
Why do certain massive stars leave no remnants?
2
Why are black holes that massive?
4
Stellar mass limits for Neutron Star and Black Holes
2
Why is the statement “black holes make up 1% of the mass of the Milky Way Galaxy” unknown?
3
How do OGLE-III and GAIA measure the mass of free microlensing black holes?
6
Is there a way to calculate the mass of of a stellar remnant given the initial mass of the star?