Will we start seeing galaxies disappear due to Universe expansion? [duplicate]

Does the fact that universe is currently expanding at an accelerating rate means that far far away objects (FAO) might start disappearing with time, set aside the "red shift"?

I'm saying this because from what I understand until now:

So there must be a point in time at which these far away objects disappear from view. How is this concept called?, or is it only a mistake I'm doing in my thinking?

Here's a simple drawing to illustrate:

I couldn't be convinced by the answer I found here, saying nothing disappears out of horizon. I don't see how it complies with that answer were event horizon approaches us.

It is a common misconception that galaxies receding faster than light cannot be observed. There are two versions of this misconception:

This is most easily seen in a spacetime diagram. But before showing that, a somewhat intuitive way of understanding this apparent paradox is to consider the journey of the photon from the reference frame of the emitting galaxy: In this frame, the photon leaves the emitter with a velocity $v=c$ (as it should), but since its velocity is always $v$ locally, then in the frame of the emitter, its velocity increases without bounds. This is not a proof, but may help to show that "light may travel faster the the speed of light".

Now to the spacetime diagram. My favorite version is from the classic paper by Davis & Lineweaver (2004), but I actually like better this version from Pulsar's excellent (!) post: 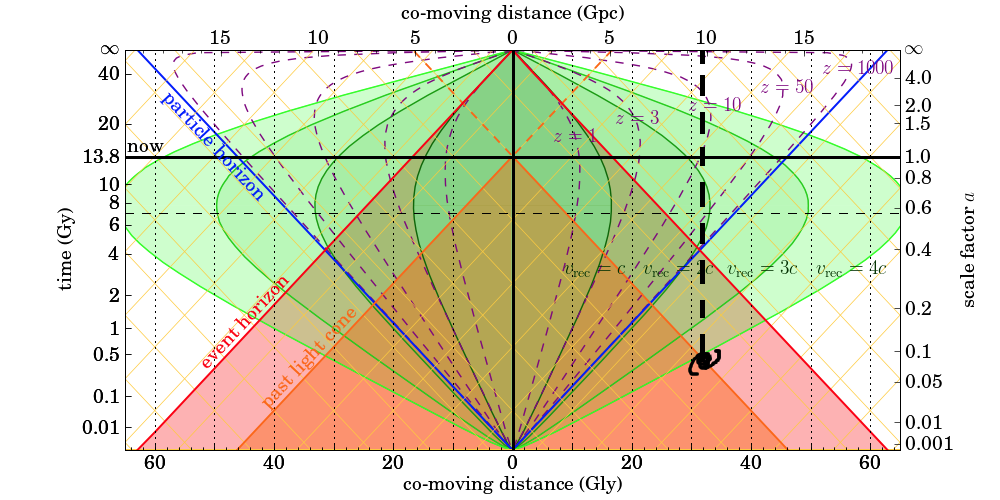 Real example of a galaxy that has always been, and always will be, receding with superluminal velocity

Such a diagram shows age (or, equivalently, size) of the Universe, as a function of the corresponding comoving distance$^1$ of events. A lot of things are going on in this diagram, and I'll refer to Pulsar's answer for an interesting discussion of all this. For our purposes, consider the only thing the I have added to the figure: the world line — i.e. the "path" taken through spacetime of some object — of the galaxy GN-z11, seen as a vertical dashed line at a comoving distance $d_C \simeq 32.2\,\mathrm{Gly}$. It is vertical, because it doesn't move in comoving coordinates. We observe it at a redshift of $z=11.09$, which means that the light we see (moving at 45º toward our worldline which is at $d_C=0$) was emitted when the Universe was roughly 400 Myr old. At that time, GN-z11 was receding at a velocity $v\simeq4c$!

The innermost green bubble (labeled "$v_\mathrm{rec}=c$") is the Hubble sphere, defined such that at any point in time, everything outside recedes faster than $c$. Meanwhile, the red line shows the event horizon, which defines the boundary between everything that can eventually be observed (light red region), and everything that cannot. A subset of this is out past lightcone (orange region) which is stuff that we have already observed (or at least have had the chance to).

Everything lying in between the Hubble sphere and the event horizon consists of events that we have been, or will eventually be, able to see, but which recede faster than the speed of light when it emits the light we see.

As you can see the region becomes narrower with time$^2$, meaning that the accelerated expansion of the Universe makes it harder and harder for photons emitted far away to reach us. We will never be able to see galaxies that today are farther away than roughly 17 Gly. But galaxies that are nearer will be seen (if we look), and a subset of these — namely the ones with $14\,\mathrm{Gly} \lesssim d_C \lesssim 17\,\mathrm{Gly}$ — are currently receding faster than the speed of light.

The size of the observable Universe always increases

The observable Universe is defined as the region within which light has had the time to reach us. The "edge" of this is called the particle horizon, and as seen from the blue line, it always increases its distance from us (in comoving coordinates, and thus even more so in physical coordinates). In comoving coodinates, it reach a maximum size of roughly 63 Gly. That means that more and more galaxies will enter our observable Universe, but as time goes they will do so at an ever-decreasing pace, asymptotically reaching a finite value (of 5 trillion galaxies, more or less). Once inside the particle horizon, a galaxy will never leave. It will, however, keep increasing its distance from us in physical coordinates, as well as its speed, and thus redshift without bounds and fade to black.

$^2$The fact that the diagram is in comoving coordinates makes it a bit hard to see, but this is still the case in physical coordinates.

Not the answer you're looking for? Browse other questions tagged universe expansion fate-of-universe or ask your own question.

18
Are there any galaxies which fell out of sight horizon due to cosmic expansion?
2
Expansion of the universe and visibility of distant galaxies
0
Objects beyond 13.3 billion light-years away are (apparently) moving away from us at faster-than-light speeds?
20
Speed of light in a black hole
6
what is a Friedmann model?
14
How many galaxies disappear beyond the Hubble Bubble horizon every year now?
4
Is the age of the Universe really 13.8 billion years?
5
What fraction of galaxies in the observable universe have we actually observed?
7
How distant were the furthest currently-observable cosmic events when their currently-observed radiation was emitted?
2
How does time work beyond the cosmic event horizon?
See more linked questions