Do all neutron stars spin?

I know that some of them are pulsars and pulsars spin very fast, but do all of the neutron stars spin? I would think that they would because of conservation of momentum, but I'm really just not sure.

I think it is absolutely safe to say that all neutron stars spin.

Conservation of angular momentum ensures that as they collapse from a massive stellar core the size (roughly) of the Earth, to something with a 10km radius, their angular velocity increases roughly as the square of the decrease in their radius (i.e. a factor of $\sim 4\times 10^5$. Thus, even if the stellar core had the slightest spin to begin with, then the neutron star will be spinning very fast indeed.

Young pulsars appears to be born with rotation periods that vary from about 0.01 s to perhaps a second or so. They then lose angular momentum as they get older.

The difficulty in answering your question without any equivocation is that once neutron stars spin down to periods of longer than 1-10 seconds or so (depending on the pulsar magnetic field strength - see picture below from Wang et al. 2011) then the pulsar mechanism switches off and the neutron star, to all intents and purposes, becomes invisible (the so-called "pulsar deathline", Zhang 2003) . 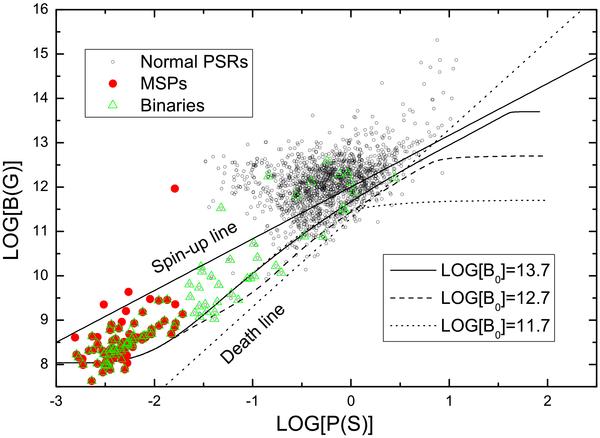 I'd say every stellar object spin. It comes from the accretion process that cannot be purely radial.

Even if you get the unlikely chance that a stellar object receive the right forces to stop spin in the local place you look it from, next time a small force is applied on it, it will start spinning again (even very slowly).

4
What happens when star spins too fast?
2
If there are neutron stars, would most stars be considered "proton stars"?
4
Can life survive on the equator of cooled and fast rotating white dwarf or neutron star?
10
What is the final destiny of a neutron star?
3
Have we Observed Continuum Emission from Neutron Stars?
5
Is there a significant population of neutron stars outside the galactic plane?
30
Are binary neutron star mergers needed to explain the abundance of gold?