What is $\phi '$ in orbital mechanics?

For the last week or so, I have been teaching myself orbital mechanics within the context of Braeunig's Rocket and Space Technology.

I noticed a symbol, $\phi '$, and was wondering what context that was used in? I think it is an angle measurement, but I know that it is almost equal to the semi-major axis on earth.

From the box labeled Geodetic Latitude, Geocentric Latitude, and Declination, found about half way down after selecting Orbital Mechanics here.

This appears to be the geocentric latitude ($\psi$), which is the angle between the equatorial plane and the point on the surface of the ellipse. It can be calculated from the geodetic latitude (also known as the geographic latitude) ($\phi$) and the eccentricity of the ellipse ($e$): $$\psi(\phi)=\tan^{-1}\left(\left(1-e^2\right)\tan\phi\right)$$ If $e=0$, then the two lattitudes are the same, because the focus is at the center of the ellipse. 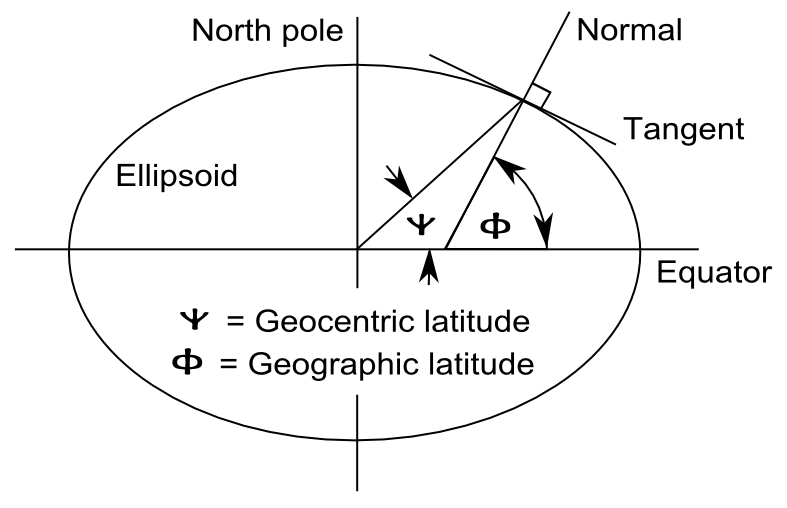 It might make more sense to use this latitude to describe the position of an orbiting object, but the vector from the focus to the object's position $(r,\theta)$ is perpendicular to the tangential component of the object's velocity vector, meaning that the geodetic latitude may be better.

0
Can I use the parallax coefficients for observatories as a proxy for latitude using arctan2(sin, cos)?

1
Distance and orbital period for terrestrial binary planets
2
On orbital mechanics of evaporating planets
2
How was Cruithne's orbital time calculated?
3
How to determine the eccentricity, knowing the orbital speed and distance
3
What is the orbital velocity of Pluto around the Pluto-Charon barycenter?
5
Was Newton the first to mention the orbital barycenter?
2
Prograde to retrograde orbital path