What mechanism causes oscillations of the solar system's orbit about the galactic plane?

In a recent paper (news release here) Lisa Randall and Matthew Reece propose that a dark matter disk coinciding with the galactic plane together with the solar system's oscillations through the galactic plane could explain the 35 million year periodicity in mass extinctions. They propose that the solar system passes through this dark matter disk in the galactic plane every 35 million years, disrupting bodies in the Oort cloud and causing some of them to collide with Earth. An image of the proposed cycles from the news release is below. 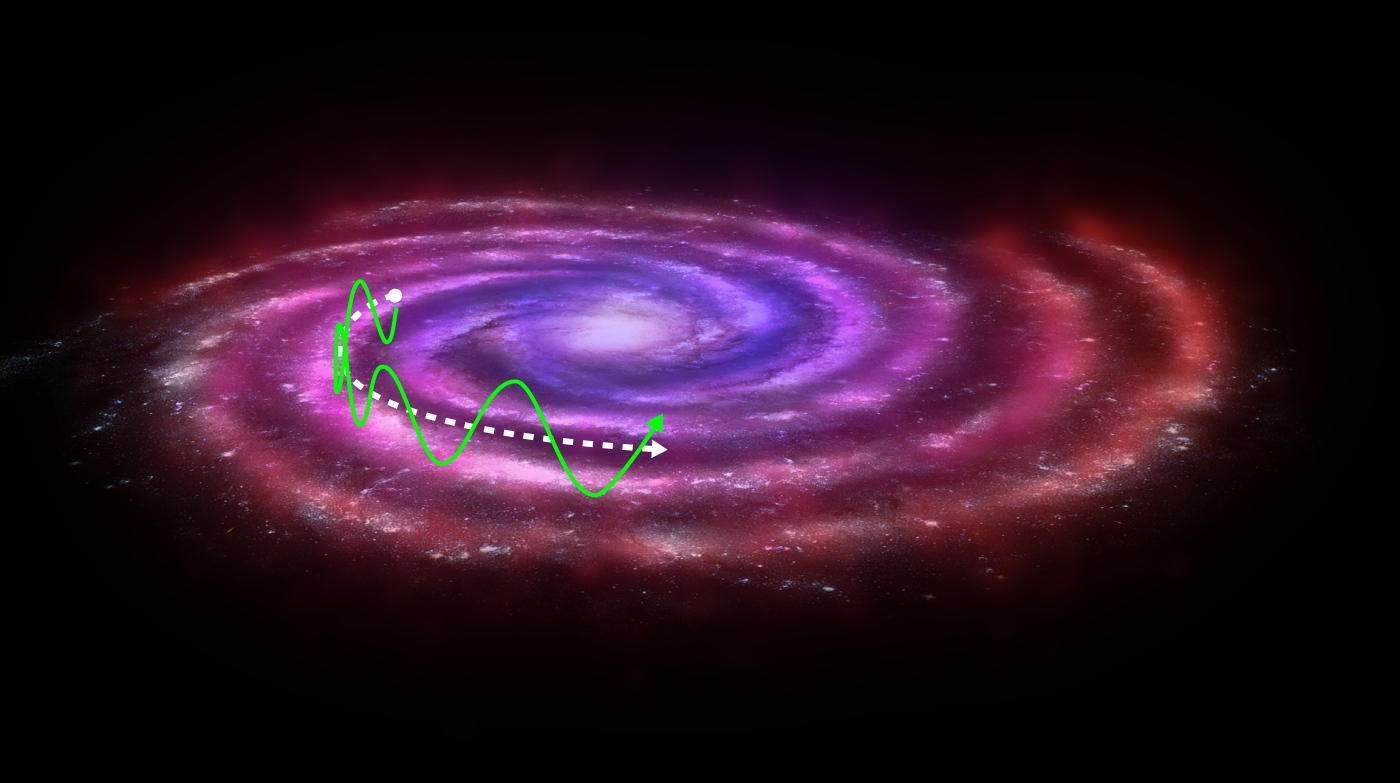 The cause for the oscillations perpendicular to the galactic plane is the gravity of the non-spherical mass distribution (needed for a plane Kepler ellipse) in the Milky Way. Simplified, there is a dense galactic plane. The density is not exactly known; therefore there is some uncertainty (a few million years) about the precise oscillation period. Details see this article, subsection 3.3.

The idea of a correlation of mass extinctions with this oscillation isn't new, it originates back probably to about 1970, or earlier.

"The outer solar system probably does not contain a large gas giant planet, or a small, companion star", see this press release.

We are probably not orbiting around a spiral arm.

The dark matter disk is a hypotheses, an idea to investigate. Usually only a small fraction of this kind of hypotheses can be confirmed definitively later, most of them can be ruled out after some time, some remain unsolved, some can be refined to match observations.

I posted an answer for this on Physics SE recently, but have also just had a query on this from another Astronomy SE answer, so I am adding this here for completness.

You can approximate the plane of the galaxy as a disk made up of stars and gas, with a density $\rho(|z|)$, that decreases with absolute distance $|z|$ from the plane.

If then assume that the Sun is close enough to $z=0$ and that the radial variation in $\rho$ was negligible enough to treat the disk as an infinite plane (this is not bad, the amplitude of the Sun's motion is only about 10% of the radial scale length of the disk density), then you could construct a little cylinder through the plane, with one face at $z=0$, where $g=0$, and use Gauss's law for gravity to estimate the gravitational acceleration at height $z$. $$ g(z) \simeq -4\pi G \int_0^{z} \rho(z)\ dz$$

This is effectively decomposing the Sun's orbit into a radial/tangential orbit plus a vertical motion, which I treat here.

Now $\rho(z)$ approximates to an exponentially decaying function with a scale height of maybe 200-300 pc. If we are closer to $z=0$ than that, then the density is roughly a constant $\rho_0$. Putting this into the equation above, we see that $$g(z) =-4\pi G\rho_0 z.$$ But this is just simple harmonic motion with an angular frequency $\sqrt{4\pi G\rho_0}$.

The density of the disk near the Sun has been estimated to be 0.076 solar mass per cubic parsec (Creze et al. 1998). Using this value, we get an approximate predicted oscillation period up and down through the disk plane of 95 million years. This is pretty close to the accepted value of 70 million years considering the approximations that have been made.

In the context of the question you ask I should add that the mass density I quote above is actually derived from the positions and motions of stars in the solar neighbourhood. As the paper I referenced discusses, the value they obtain is close to that obtained by counting stars and adding the contributions of gas and dust. There is actually little evidence for dark matter in the disk from these measurements.

This result is entirely consistent with the idea of a dark matter distribution that is 10x the visible mass but roughly spherically symmetric, and which accounts for the Milky Way rotation curve. Not much of this dark matter is in the disk.

Finally, the picture is not quite right. The Sun completes only about 3 vertical oscillations for every orbit around the Galactic centre.

Gravity. Specifically, the gravity of the mass of stars in the disk.

As we move upward above the disk, we are slowing down. The amplitude of the vertical displacement is about 70Pc, or about 110LY up, 110LY down and back again over about 66 million years.

This happens due to the changing amount of mass contained within the varying orbital radius. The current vertical position is 17LY above the median plane and last crossing about 3million years ago.

We are about 26,540LY from the center and will reach perigalacticon in about 15million years.

Note: my data comes from a variety of sources and may not be completely accurate.

Ok, it makes a lot of sense that the gravity of the disc of the Milky Way is pulling stars up and down as they go about their circum-galactic orbit. But this wouldn't explain why recent 3-D observations of the nearest stars using the FLAMES-GIRAFFE spectrograph on ESO’s Very Large Telescope and the IMACS spectrograph at the Las Campanas Observatory showed a definite wave-structure in the motions of stars orbiting the Galactic plane. In other words, most of the stars in the disc are following each other in a chain or train, as if they are bobbing up and down on a CURRENT. Which means they most certainly are oscillating on a current. And this was predicted in 1978!

Our Sun produces a magnetic field stretching out along the equatorial plane in the heliosphere. This field stretches throughout the Solar System where it is called the “Interplanetary Magnetic Field”. In 1965 John M., Wilcox and Norman F. Ness published their finding of the “Heliospheric Current Sheet” which showed that the Sun’s rotating magnetic field is constantly producing waves in the plasma of the interplanetary medium.

These waves form a “Parker Spiral” and are described in terms of an electromagnetic current but they are also mechanical waves which cause the planets themselves to oscillate up and down as they orbit the Sun. In 1978 Hannes Alfven and Per Carlqvist suggested that there is a similar “Galactic Current Sheet” carrying an electric current of 10^17 to 10^19 amperes through the plane of symmetry of the Galaxy.

Ok? That pretty much solves the mystery of the oscillation of the Milky Way's stars. But the problem here is that (ahem, cough cough) OUR SOLAR SYSTEM IS NOT PART OF THE MILKY WAY. In 1994 it was discovered that we are actually part of the Sagittarius Dwarf Elliptical Galaxy, or Sag-DEG for short, which is in a 500 million year POLAR ORBIT around the Milky Way.

Have you ever wondered why they say our Solar Apex is near Vega, but Vega itself is moving towards us almost twice as fast as we are moving towards it??? Well, in the late 80's it was discovered that nearly all of the stars orbiting the Milky Way seem to be "raining" down on our position. Which could only mean that our Solar System is moving upwards, out of the Milky Way. Sorry to inform you guys, but even though the stars of the Milky Way oscillate up and down during their 250 million year orbit, we aren't part of that dance. Our own path will take us high above the Galaxy, with a spectacular view at apogalacticon, and then back down again.

Not the answer you're looking for? Browse other questions tagged orbit earth dark-matter galactic-dynamics near-earth-object or ask your own question.

9
Does the Sun turn around a big star?
5
Is there evidence for galactic “seasons”?

34
Why do the planets in our solar system orbit in the same plane?
5
What are the arguments against the Feng and Gallo thin disk explanation of galactic rotation curves?
5
What is the direction of the movement of the solar system in relation to the galaxy's plane
1
What are the equations for an orbit with time as parameter?
2
Why does the neutral hydrogen velocity have this characteristic behavior in the galactic plane?
2
What causes the Earth to have gravity?
1
What does the angle between plane of earth's orbit and ecliptic vary between?
2
Direction of Earth’s poles relative to the Sun’s movement around the Galaxy