What could have made a satellite appear to move side to side while near the horizon?

Yesterday while coming out of a restaurant my wife and I noticed what appeared be a satellite passing quite high in the sky. Based on the location, time, and brightness this appears to have been a passing of the GEOS 3 Rocket. What made this unusual is that when it got low (perhaps 25-30 degrees off the horizon) it suddenly appeared to dart side to side (over 15 degree sweeps) multiple times over perhaps a second, while continuing its general western trend, before vanishing.

Since this all happened rather quickly I had to estimate the distances after the fact using my hands and what few reference points were available. It is certainly possible that it was lower in the sky than my estimate as that is always a tricky part to judge. I'm quite certain of the sweep distance but an answer that could explain a smaller sweep could still be very useful.

What could cause a satellite to appear to move side to side in this fashion?

Your link shows estimated magnitude, and it gets quite dim when it gets close to the horizon.

As a spacecraft in low earth orbit appears to approach the horizon, the line-of-sight distance from it to you can change from a few hundred to a few thousands kilometers, which is why the brightness in your table changes so much.

The path in the sky shown in the link is going to be almost vertical (reaches 70 degrees). Wikipedia says GEOS-3 is a satellite put into orbit in 1975. These days there is a big effort to de-orbit the "leftovers" so they burn up in the atmosphere (space junk mitigation) but back then it was common for each launch to leave other stuff up there for decades or longer.

Wikipedia says the COSPAR-ID for the actual GOES-3 satellite is 1975-027A. That means it was the 27th internationally recognized launch in 1975. "A" is assigned to the GEOS-3 satellite itself, but if you look up 1975-027 in the satellite catalog (SatCat) at Celestrak.org you can see there are were four other objects associated with the launch being tracked. One of them has burned up, but the others are still there.

You can double check if 1975-027B is the one that your link is talking about. Anyway, since they are so old, none of them is capable of a spectacularly sudden engine burn and change in orbit. So I'd have to say that whatever you did see, it isn't associated with the GEOS-3 launch.

Another point to consider; if you just coming out of a restaurant, the chances are low that you could see a 5th magnitude object. Near the horizon the apparent speed would be much slower than that of a satellite overhead. 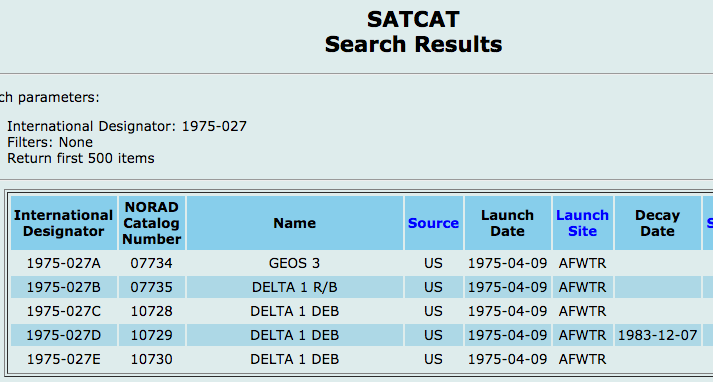 Not the answer you're looking for? Browse other questions tagged artificial-satellite optics or ask your own question.

3
What is the accuracy of an artificial satellite at a certain magnitude?
4
How do observational astronomers manage streaks and other artifacts from objects in Earth Orbit?
4
What is the LSST's plan to address frequent satellite trails in data?