Why are there no ISM clouds with temperatures between 100 and 6,000K?

In the interstellar medium, there are several different diffuse phases of gas, distinguished by their density and temperature. Specifically, the cold neutral medium has temperatures from ~50-100 K and the warm neutral medium ranges from 6,000-10,000 K. According to my professor, there have been few gas clouds found with temperatures between these two.

Does anyone know why such a large gap exists?

Let $n$, $T$, and $x_i$ be the number density of hydrogen, the temperature of the gas, and $n_i/n$, where $n_i$ is the number density of the $i$th component of the interstellar medium. We can then write the criteria for thermal equilibrium as $$n^2\Lambda(n,T,x_i)-n\Gamma(n,T,x_i)\equiv n^2\mathcal{L}=0$$ where $\Lambda$ and $\Gamma$ and the heating and cooling functions, respectively, and $\mathcal{L}$ is defined through those functions and $n$. If the equilibrium is unstable, $$\left(\frac{\partial\mathcal{L}}{\partial S}\right)<0$$ for entropy $S$. This leads to different instability conditions, termed the isochoric and isobaric instabilities (Field (1965), $\text{Eq } 4a,4b$). These can be determined from the temperature, pressure, and density of the gas (also assuming that the gas can be approximated as an ideal gas).

In general, $\Lambda$ and $\Gamma$ are complicated to determine, although combinations of power-law and exponentially decaying factors may often be sufficient. An example curve that seems to pop up a lot as an example was calculated by Dalgarno & McCray (1972), Figure 2: 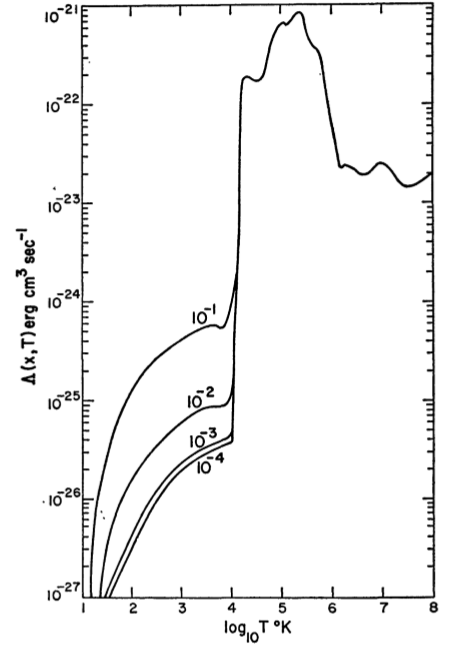 More accurate measurements have been made since then, but the general shape is still applicable. The warm neutral medium occupies the area near the sharp change at around $\sim10,000\text{ K}$, and the cold neutral medium occupies the area in the left of the diagram. Another way to visualize this is on a $\log P/\log n$ diagram like this one (from these slides, annotated from Wolfire et al. (1995)): 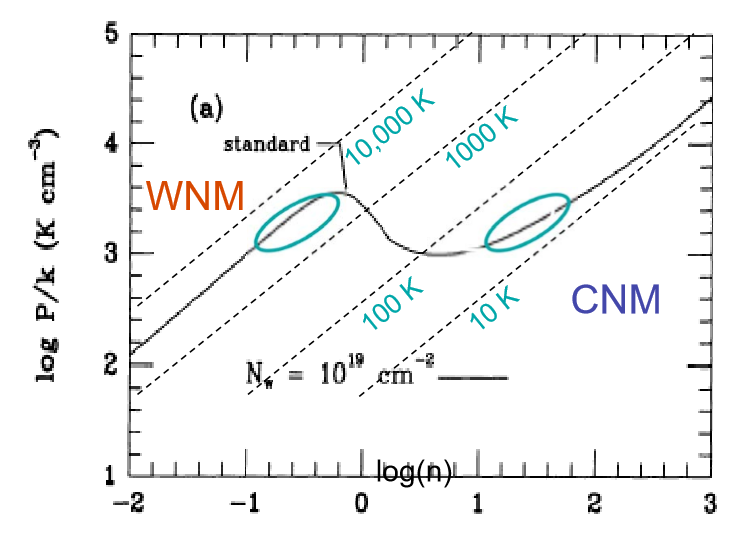 In reality, the two-phase model is an oversimplification, and the ISM has more distinct components. However, the isochoric/isobaric instabilities still limit the range in which clouds can exist in stable equilibria, and explain the dearth of gas in the relevant temperature range.

As a final note on notation, $$\left(\frac{\partial\mathcal{L}}{\partial A}\right)_B$$ means that we take the partial derivative of $\mathcal{L}$ with respect to $A$ while keeping $B$ constant. It's a common thermodynamical convention.

Not the answer you're looking for? Browse other questions tagged temperature interstellar-medium or ask your own question.

1
Explanation of the isochoric and isobaric instability conditions of interstellar medium gas clouds
14
How cold is interstellar space?

16
What is the difference between gas and dust in astronomy?
1
Relationship between temperature of nebula and size of star
8
Lack of objects between heliopause and Oort cloud?
2
Why can't neutron stars ignite and explode?
3
Why the forbidden lines of [OIII],[NII] and [SII],[OII] are sensitive to electron temperature and electron density, respectively?
4
Why do these astronomers say that “Carbon chains with more than nine atoms are unstable”?
3
Galactic winds/outflows: why and how are they detected via blueshifted absorption lines in spectra?