Polynesian wayfinding techniques - how does this work?

In Disney's "Moana", we get a hint of a Polynesian wayfinding technique of holding your hand to "measure the stars" (note, you're not giving the sky a high-five). We get to see two different constellations measured: Crux (the Southern Cross), and Orion.

By matching the positions of the stars either in real life or on Stellarium, I was able to figure out something of how the Southern Cross is used. You place your fingers against the four brightest stars (two pointers plus the two brightest of the cross itself), and then the south celestial pole is right in the curve of your outstretched thumb. (Aside: It makes an awesome demo in Stellarium to place your hand on the screen, do the measurements, and then turn on the grid, highlighting the south pole beautifully.)

What I haven't managed to do, though, is match the corresponding measurement in Orion. The fingers are placed near Orion's belt and heel, but I can't figure out what is being measured. Can anyone provide either certain information, or plausible guesses?

(I can provide a screencap if there's an appropriate way to include it in the question.)

This is from an article in the Conversation, by Duane W. Hamacher, and Carla Bento Guedes:

"Voyagers measure the angles between stars and the horizon using their hands. The width of your pinkie finger at arm’s length is roughly one degree, or double the angular diameter of the Sun or Moon.

Hold your hand with the palm facing outward and thumb fully extended, touching the horizon. Each part of your hand is used to measure a particular altitude. 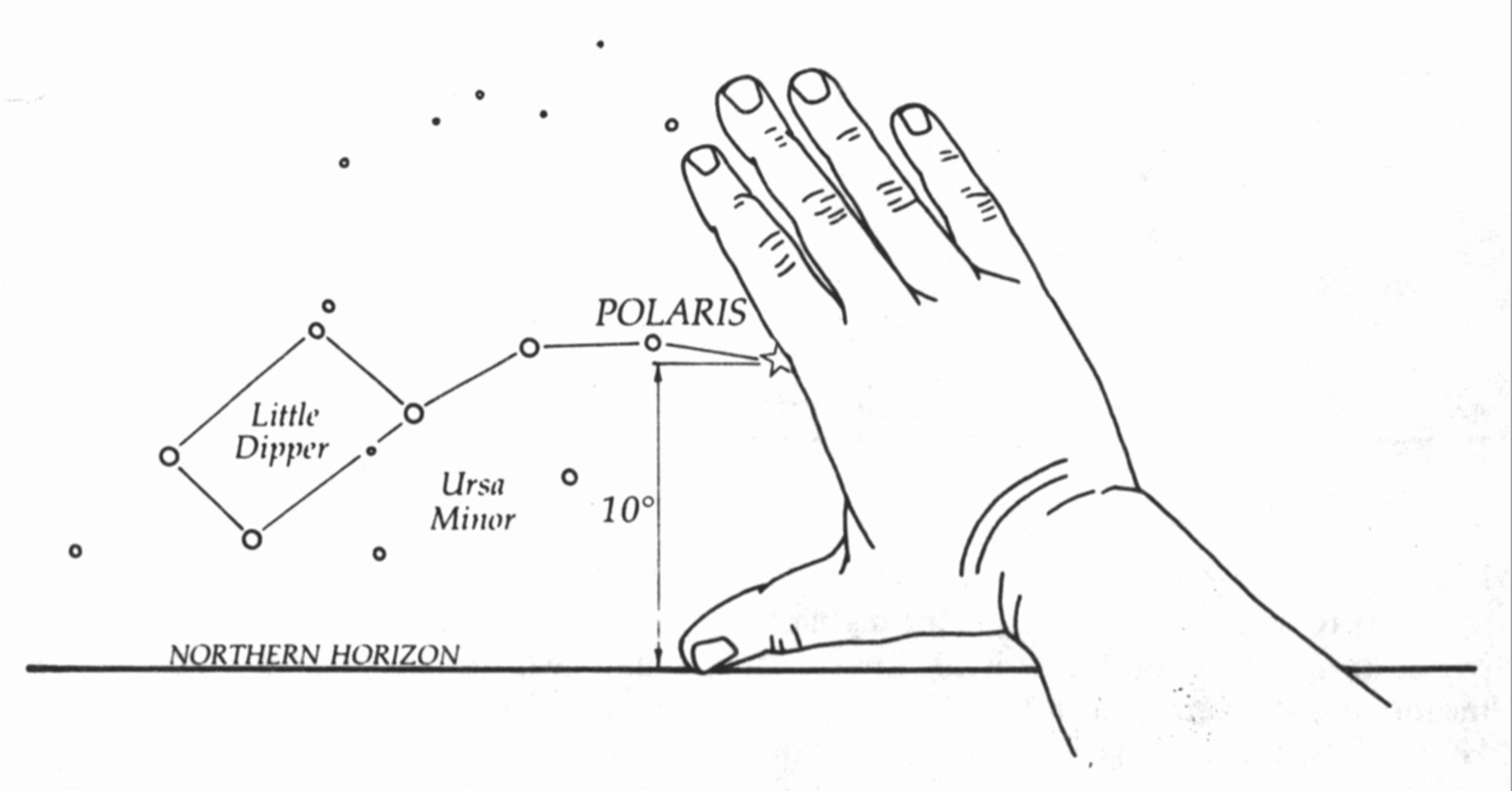 The hand method used by Nainoa Thompson to find the altitude of the Polaris. Journal of the Polynesian Society In Hawai'i, the “North Star”, Polaris, is Hokupa'a, meaning “fixed star”. It lies close to the north celestial pole. The altitude of Hokupa'a indicates your northerly latitude.

In the film, we see Moana Waialiki using this technique to measure the altitude of a group of stars. Look closely and you can see that she’s measuring the stars in Orion’s Belt. The position of Moana’s hand indicates the star above her index finger has an altitude of 21º. Given that the movie takes place about 2,000 years ago near Samoa, the position of Orion indicates they are travelling exactly due East.

Moana measures altitude of Orion’s belt stars. Walt Disney Studios Motion Pictures Later in the film, we see Moana navigating by following Maui’s fish hook. In the various Polynesian traditions, the hook was used to pull islands from the sea. It is represented by the constellation Scorpius, which rises at dusk in mid-May. This indicates southeasterly travel.

Looking at Scorpius - Maui’s Hook - in the same orientation as shown in the film. Stellarium However, the positions of the stars are not fixed in time. Over the 3,500 years that Polynesians have been exploring the Pacific, the stars have gradually shifted due to precession of the equinoxes.

From the latitude of Samoa, the Southern Cross has lowered from 60º altitude in 1500 BCE to 41º today. Those navigating by the stars must gradually adjust their measurements as the positions of stars slowly shift over time."

16
How would the pocket cellular clock work?
5
Is this the Cancer constellation?
1
Does the sun now 'bypass" some of the original zodiac constellations?
5
Exactly how does Canis Minor look like a dog?
2
Is this star group a constellation recognized by the IAU?
14
Does this photo show the "Little Dipper" and "Big Dipper"?
5
What is this constellation?
9
What Constellation Is This? (Photo Included)