Are the Trappist-1 planets close enough to be tidally heated?

This is a complicated question that would really require a full physics simulation and better knowledge of the system to accurately answer. But let's try a few back of the envelope calculations to see what we get.

I'm going to calculate the tidal effects of TRAPPIST-1c on TRAPPIST-1b (simply because, a priori, this seems likely to be where the strongest tidal heating will be induced). See the figure below which describes the parameters. 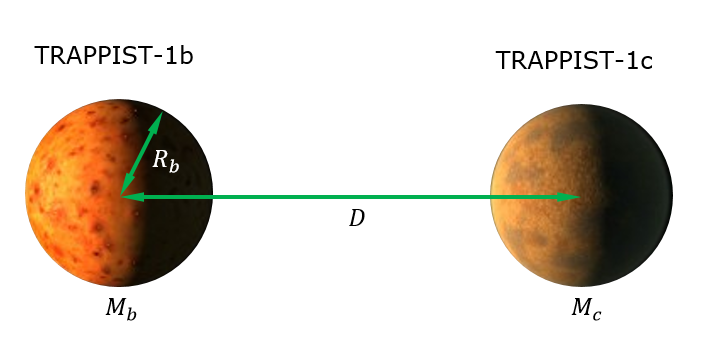 But this isn't enough to determine the amount of tidal heating that may occur. Tidal heating only occurs when the tidal force changes. It is this constantly changing tidal force which results in tidal flexing of the planet and thus creating heat through tidal friction. Fortunately, for these two planets, the tidal force will be changing since $D$ will be constantly changing. So let's calculate $F_{tide}$ for the two extremes where these planets are as close as possible and as far as possible and difference them.

If I plug in numbers to this, I find that

Okay, but what do we do with this number? It's somehow a metric of the change in tidal forcing that 1c imparts on 1b, but is it negligible? To determine this, we have to compare it to something. Let's compare this to the tidal forcing that TRAPPIST-1b would receive from the star.

I've already set up the math, so we don't need to go over that again. But first, let me discuss where this tidal forcing is actually coming from. Quoting an article from space.com, the paper's author, Gillon, states:

Because the seven alien worlds orbit so tightly, they're probably all tidally locked, Gillon said. That is, they likely always show the same face to their host star, just as Earth's moon only shows the "near side" to us.

As I said above, the only way to produce tidal heating is to have changing tidal forces. These planets are likely synchronized and always present the same side to the star. It's marginally possible these planets aren't perfectly tidally locked, but rather have some higher spin-orbit resonance. That is, their spin orbit resonance might not be 1:1 (as it would be if they were tidally locked) but instead could be something like 3:2 (which is what Mercury has). I'll ignore that complication though and just assume 1:1 resonance. So if they're tidally locked, they can't experience differing tidal forces through their own rotation. Instead, the differential tidal forcing comes from the orbit's ellipticity. Sometimes the planet will be closer and sometimes it will be farther, causing a differential tidal force on TRAPPIST-1b from the star as it orbits. This is exactly what occurs in the tidal heating of Io. Let's calculate $\Delta F_{tide,*-b}$ by using the varying distances TRAPPIST-1b will have from the star. I found that TRAPPIST-1b will orbit between $0.0101\:\mathrm{AU}$ and $0.0119\:\mathrm{AU}$1. This means the differential tidal force is:

The back of the envelope calculations show that the differential tidal force on TRAPPIST-1b from TRAPPIST-1c is about $0.2\%$ of the differential tidal force due to the star. Whether you consider this negligible or not is up to you. I'd personally consider it a pretty small effect and say that most of the tidal heating these planets experience comes from the star itself.

This is a remarkably hard question to answer and I can't even really do a back of the envelope calculation without making wild, unjustifiable assumptions. The calculations above simply determined the maximum tidal force variation over time. That doesn't tell us anything about how much tidal heating this may induce though. That requires knowing more about the planet itself, in particular the planet's Love numbers which define the rigidity of the body and thus how easy it is to stretch via differential tidal forces. You can vary your tidal forcing as much as you want, but if your planet is pure iron (and thus very rigid) you're unlikely to have as much of an effect as if it were primarily silicate (and thus much less rigid). The paper produces the plot below which defines the potential constituents of each planet. This would be a first step in determining the planet rigidities, but as you can see from the error bars, it would be highly uncertain. 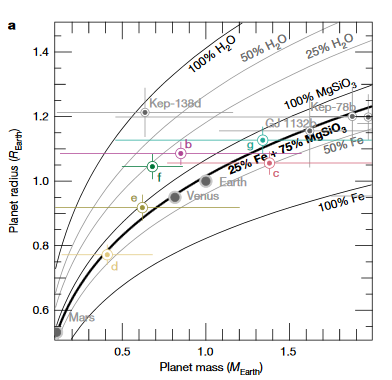 Overall, and this is entirely opinion based and from my calculations above, but I'd say the chances of the inter-planetary tidal heating having significant effects on the interior heat of of these planets is negligible. More than likely the biggest contributing factor is radioactive decay, followed by tidal heating from the star (but this is amplified by the eccentric orbits induced by planetary gravitational perturbations)

What drove the comment that "the tidal forces between the planets are not negligible" was the Jovian moons. The three innermost of the Galilean moons of Jupiter, Io, Europa, and Ganymede, are in a 4:2:1 orbital resonance. Io would not exhibit any tidal heating if its orbit was circular.

Io's orbit is not circular, thanks to those orbital resonances. One of the consequences of these resonances is that Europa and Ganymede act to pull Io's orbit out-of-round; i.e., more elliptical. The elliptical nature of Io's orbit results in time-varying tidal stresses on Io, which makes Io geologically active. Those tidal stresses by Jupiter in turn act to circularize Io's orbit.

The tidal stresses become less severe as Io's orbit becomes closer to circular. Io cools down, resulting in an increase in its tidal qualify factor Q. This makes it less susceptible to further circularization. The competing forces from Europa and Ganymede can then make Io's orbit more eccentric. Tidal stresses eventually come into play again, warming up Io and decrasing its tidal quality factor. Now Jupiter is the driver. This makes for a rather nice hysteresis loop.

What prompted that comment that the TRAPPIST-1 planets may be subject to tidal heating is that some of those planets appear to be in an orbital resonance, with periods being very close to small integer multiples of one another.

Not the answer you're looking for? Browse other questions tagged tidal-forces trappist-1 .

2
What would the tides on the Trappist-1 planets be like?
2
What is the level of tidal heating between bodies that are already in mutual tidal lock?

12
Are the Trappist-1 planets in stable orbits?
4
Is Jupiter's rotation slowing?
6
Do tides occur on planets like Neptune, having water?
6
Why would tidal forces on planets become more intense when a star becomes a white dwarf?
18
Are there any to-scale diagrams of the TRAPPIST-1 system?
3
Are the planets in the TRAPPIST-1 system so close that inhabitants on one planet could see surface details on the other planets?