How was Trappist-1 discovered?

I was going through all the questions in this community related to TRAPPIST-1 in order to know how planets TRAPPIST-1b to TRAPPIST-1h were discovered, but there aren't any.

How were they discovered?

The star at the center of TRAPPIST-1 is called 2MASS J23062928-0502285. It was discovered by the Two Micron All-Sky Survey (2MASS), which imaged the whole sky in the infrared between 1997 and 2001. This resulted in a catalog of over 300 million objects. TRAPPIST-1 itself was cataloged in 1999. The name is actually its coordinates in right ascension and declination.

The planets of the TRAPPIST-1 were discovered by the method of transit photometry. The way this works is a telescope watches a star for a period of time and records the amount of light coming from the star. They chart how much light is coming from the star as a function of time, creating a light curve. If they see periodic dips in the intensity from the star, there is a high likelihood that that star has a planet in orbit around it. The planet blocks the light from the star every time it passes between us and the star. This causes the dips in the light curve. One advantage to this method is that you can scan multiple stars in the same field of view, analyzing them all for planets.

By measuring how long it takes planets to pass in front of the star, how much light it blocks, and how often they orbit, scientists can calculate the masses of these planets and how far away from the star they are by using Kepler's laws of motion.

TRAPPIST-1 was initially determined to have planets orbiting it by the Transiting Planets and Planetesimals Small Telescope - South team. From their data they determined that it had at least 3 planets. One of these planets was in the habitable zone of the star. They published their results in the journal Nature in May 2016.

Once TRAPPIST had determined that the system had planets around it, NASA trained the Spitzer Space Telescope on it. Ground-based observations of Trappist-1 are difficult because it is so dim. Spitzer, an infrared telescope, made more precise measurements of the light curves and determined that there were at least 7 planets in orbit around it, 3 of which were in the habitable zone. Additional observations were made by numerous other telescopes including the Very Large Telescope, UKIRT, the Liverpool Telescope, and the William Herschel Telescope. The results were also published in Nature. 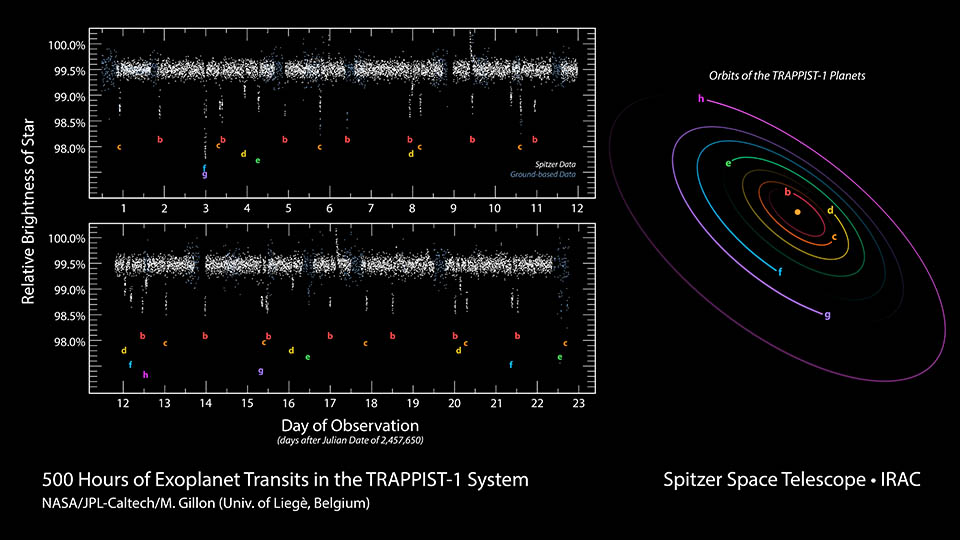 Here's an image showing the light curve of the TRAPPIST-1 system as measured by Spitzer.

In May last year (2016) the Transiting Planets and Planetesimals Small Telescope–South (TRAPPIST) facility (its a .6 m automated scope in Chile) published their observations of the dwarf star and announced they had found 3 exo-planets orbiting it.

Their observations were then followed up by the VLT and the Spitzer Space Telescope (and others), and the 500 hours of observation from the SST has resulted in this announcement of the extra 4 exo-planets being identified, and further they are able to use that data to measure the sizes and masses of 6 of them.

The discovery, reported in the journal Nature, was made by astronomers using Nasa's exoplanet-hunting Spitzer Space Telescope.

The telescope operates at the infrared wavelengths which glow brightest from TRAPPIST-1, and can detect the tiny dimming that occurs when a passing or "transiting" planet blocks out light from its star.

Spitzer's data allowed the team to measure precisely the sizes of the seven planets and estimate the masses and densities of six of them.

The Spitzer was launched in 2003, and was never meant to continue in space for this long but the telescope is still making discoveries beyond what was imagined. It follows the earth's orbit around the sun, but travels slightly slower, so over time it gets further away from the earth. It is now in its "final" phase, which lasts until 2018.

Another reason for the interest. Because the star is so dim and small, planetary signatures in the infrared stand out much better than they would with a sunlike star. The star has been described as an 'ultracool brown dwarf', which would imply that it doesn't have much nuclear fusion in its interior. The planets are incredibly close to their star (much closer than Mercury in our system) which is why they are relatively warm.

Also, for the planets to be found at all, there is a freakish alignment where the planetary orbits are all aligned so that they eclipse their parent star from our vantage point - they are all moving in the ecliptic - the 'dinner plate' formed by their circles around their parent star.

Neither of these would be true if we were looking at our own solar system from afar - the Sun would drown out the signatures of Earth-sized planets with current telescope technology, and only one or two of the planets in our system would pass in front of the Sun, due to orbits in our solar system being inclined above and below the ecliptic. So this is extreme luck.

Discussing the planets as 'earthlike' is a HUGE stretch. They aren't gas giants like Jupiter, and their size indicates they are probably rocky. But Earth and Venus would look the same from this distance - and the surface of Venus is near 1000F with atmospheric pressure 100x that of Earth.

As far as visiting - the most advanced plans for interstellar spacecraft involve "ships" weighting a few grams moving a few percent of the speed of light. It would take several hundred years for such microprobes to reach this system.

The big excitement is that, having such a small and dim star, space telescopes in the near term will be able to collect infrared signatures from the planets, and thereby get atmospheric composition - not possible with other "earthlike" planets to date. And with 7 examples, we'll have our first real statistics for "earthlike" exoplanet features.

Not the answer you're looking for? Browse other questions tagged exoplanet observational-astronomy nasa trappist-1 or ask your own question.