Could there be massive charged “rivers” in interstellar space?

Some suggest that there might be currents of charged particles moving at 0.98c in interstellar space. Since this is tainted by association with the crack “Electric Universe” cosmology, my first impression is to be dismissive of the possibility.

But, proponents point to current observations and ideas, so I thought I’d check on this claim in and of itself. Given what we do know, are such currents possible or excluded? And, if possible, could they be massive enough to propell a space craft bearing a large sail?

If one particle makes a current, there are lots of particles that hit the Earth at energies much more than 0.98c, most famously the "Oh my god particle"

If you have many particles travelling at these speeds you don't have a river, more a beam, or a jet or particles. These are produced by active accretion disks around black holes. 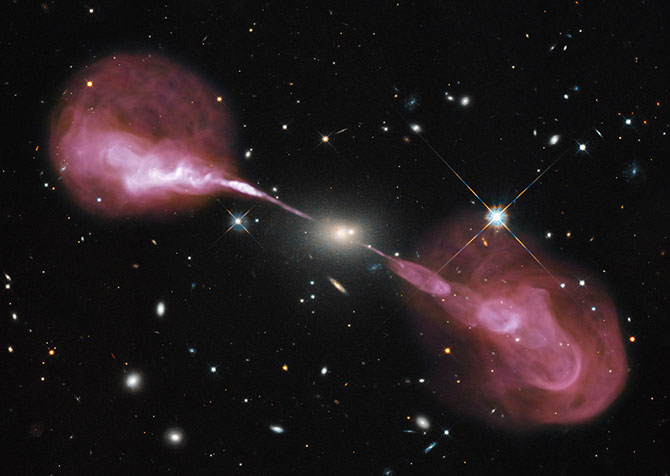 In this combination image from Nasa (the background is a visible light image from hubble, the pink lobes are from the VLA, a radio telescope), an active radio galaxy is producing two jets, that are much longer than the size of the galaxy. These consist of particles that have been accelerated by the black hole's gravity and shot into space. A ship would find it hard to use the energy in these jets. Particles travelling at close to the speed of light are high energy radiation. A space ship unlucky enough to pass unprotected through the beams would be irradiated. I haven't done the maths, but the dose would probably be enough to kill anyone on board. It's hard to extract useful energy from anything so violent.

However if you are looking for random currents of charge, curving between the stars, and interstellar sailors tacking and jibing betweent them, you may be out of luck.

Not the answer you're looking for? Browse other questions tagged cosmology interstellar-medium interstellar-travel plasma-physics or ask your own question.