I have just been watching a podcast called "Deep Astronomy" and the discussion was about a super fast spinning black hole discovered with the NuSTAR space observatory. This black hole was modeled with high confidence to be spinning at about 99% of the maximum spin rate. They stopped short of saying that the tangential velocity of this spin rate is "c" (and how can a singularity have a "tangential velocity"?) They did say that the event horizon at maximum spin of a stellar black hole is about 1-1/2 km. and that if a black hole were to spin faster then the result would be a "naked black hole" that would defy the laws of physics (GR).

Also, shouldn't all black holes spin extremely fast (conservation of angular momentum) or would a retrograde accretion disk slow it down. Could somebody clarify this whole "black hole spin thing" without getting too complicated??

Since I like math, let's throw some math into this. I'll try to keep it as simple as possible though.

The important parameter we want to calculate is the black hole's radius. If you run through the math, you find that this radius is given by

In the case when $a/M=0$ (and thus $a=0$), this reduces to just $r_e=2M$, or in regular units (instead of geometrized units) $r_e=2GM/c^2$. Hopefully you can see that this just reduces to the normal Schwarzchild radius for a non-rotating black hole and thus the equation above is a generalization to account for spin. Let's look at the other limit when $a/M=1$ (and thus $a=M$). In this case, you find that the radius is $r_e=M$. When $a/M=1$, you have a maximally rotating black hole, and your radius is half the normal Schwarzchild radius of a non-rotating black hole. This equation defines the radius of the Event Horizon, the point after which there is no returning from the black hole.

As it turns out, when you define your equation to calculate the radius of the black hole, there are actually multiple solutions! The section above shows one such solution, but there's another important solution as well. This radius, sometimes called the static limit is given by the equation

Notice that this is almost exactly the same as above, except for that extra $\cos^2(\theta)$. This defines a different, slightly larger and somewhat "pumpkin-shaped" horizon which encompasses the inner Event Horizon defined above. The region between this outer horizon and the inner horizon is known as the Ergosphere. Without getting into the nitty gritty details, I'll just say that one important point about the Ergosphere is that anything inside it (that is, $r_e<r<r_s$) must rotate exactly with the black hole - it is physically impossible to stay still here!

Note that I've dropped the geometrized units just to be completely explicit. This has introduced an extra $c$ now. Remember that $a_{max}$ is achieved when $a/M=1$.

We can also define the angular momentum using the standard equation from physics 101, $J=rMv_\perp$, where of course $r$ is the radius of your object, and $v_\perp$ is the perpendicular, or else tangential, velocity of your spinning object. Recall from above that for a maximally rotating black hole, $r_e=M$ so we also have that

You can see that these two equations for $J_{max}$ only equal each other if the tangential velocity $v_\perp$ is equal to the speed of light $c$. So yes, you are correct to presume that at the fastest possible rotations, the black hole's event horizon is rotating at the speed of light!

They did say that the event horizon at maximum spin of a stellar black hole is about 1-1/2 km. and that if a black hole were to spin faster then the result would be a "naked black hole" that would defy the laws of physics (GR).

We know the equation exactly, since I defined it above. The radius of a stellar black hole (that is a black hole with mass exactly equal to the mass of the Sun, $M_\odot$) is given by

Suddenly our radius is complex and has an imaginary component! That means it is not physical and thus cannot exist. Now that we don't have an event horizon, our singularity can't hide behind it and is "naked", exposed to the universe for anyone to see. GR tells us such an event shouldn't be allowed to happen because it results in all sorts of violations of physics. So somehow, something has to prevent black holes from spinning faster than a maximal black hole.

Shouldn't all black holes spin extremely fast (conservation of angular momentum) or would a retrograde accretion disk slow it down.

Yes, that is true in general. All black holes should spin extremely fast, simply because of conservation of angular momentum. In fact, I don't think I can come up with a case where a black hole was found to be not spinning. Shown below is a plot from this Nature paper which shows the measured spin of 19 supermassive black holes. They're all spinning pretty fast with some of them almost at the speed of light. None of them are even close to not spinning. 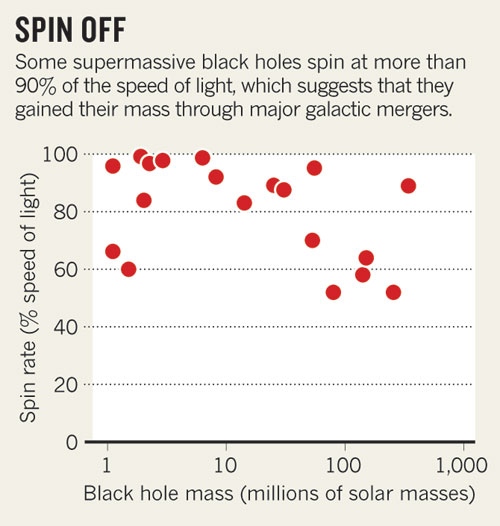 Footnote: In GR, to make the math easier, often scientists adopt special units known as geometrized units. These are units chosen in just such a way that the gravitational constant, $G$, and the speed of light, $c$, are equal to one. There's infinitely many units which allow this. Essentially this means no GR equations have $G$ or $c$ in them, but they're implicitly there, they're just equal to one and so not shown.

From a quick drive around the InformationSuperHighway, I'd say the answer will remain a complicated mess :-) . I did find a reasonably non-mathematical discussion at universetoday

The speed limit is set by the event horizon, eventually, at a high enough spin, reaches the singularity. You can’t have what’s called a naked singularity. You can’t have a singularity exposed to the rest of the Universe. That would mean that the singularity itself could emit energy or light and somebody outside could actually see it. And that can’t happen. That’s the physical limitation of how fast it can spin. Physicists use units for angular momentum that are cast in terms of mass, which is a curious thing, and the speed limit can be described as the angular momentum equals the mass of the black hole, and that sets the speed limit.”

Just imagine. The black hole spins up to the point that it’s just about to reveal itself. But that’s impossible. The laws of physics won’t let it spin any faster. And here’s the amazing part. Astronomers have actually detected supermassive black holes spinning at the limits predicted by these theories.

One black hole, at the heart of galaxy NGC 1365 is turning at 84% the speed of light. It has reached the cosmic speed limit, and can’t spin any faster without revealing its singularity.

I'm sure I worked this out in detail in another answer, but I can't find it now. Just to add a point addressing some comments above. The limiting angular momentum of a black hole is (in suitable units) the square of its mass, while the Schwarzschild radius grows as the mass. So consider a large (near) maximally spinning black holes of mass $M$ which will have Schwarzchild radius $2M$.

18
If all stars rotate, why was there a theory developed that requires non-rotating stars?
39
How do we know that black holes are spinning?
4
Why does matter spiral into blackholes?
9
Could a star closely orbit a black hole long enough for the star to have lost 0.5B+ years to time dilation?
3
Why does the outside edge of a Kerr black hole ergosphere rotate at the same speed as the inner edge?

3
Does conservation of energy make black holes impossible?
1
How does a black hole spin?
6
Could the merger of two rotating black holes create another that breaks the rotational speed limit?
8
Black hole without singularity?
4
Shouldn't we not be able to see some black holes?
39
How do we know that black holes are spinning?
4
Velocity of ringularity