A curious relationship between lunar periods and the solar year

Earlier today I was exploring the astronomy features on WolframAlpha, when I stumbled upon an intriguing numerical relationship involving the values for the lunar synodic and sidereal months. Using the values

I noticed that this algebraic combination is very close to one year:

I really doubt this this is a coincidence. Is there a simple way to understand what makes this approximate equality hold?

The tropical year is about 20 minutes shorter than the time it takes Earth to complete one full orbit around the Sun as measured with respect to the fixed stars (the sidereal year).

You just found the difference between the sidereal year and the tropical year, and that was no coincidence.

Dividing both sides by $Y_{sid}$ yields:

can be derived with the aid of Fig. 1 below, using the different axes frames, and making the following simplifying assumptions about the motions of the Sun, Earth and Moon :-

In the diagram the angles $\theta$, $\phi$, $\psi$, and $\pi + \theta$ are all `polar coordinate angles' wrt the relevant $x$-axis. The axes-frame $x'y'$ always points towards the Sun, and it moves with the Earth in its orbit. The $y'$ axis is the 'noon line' always pointing towards the Sun. The phases of the Moon are determined by the phase angle $\psi$ which the Moon makes wrt the $x'$ axis :-

From the diagram it is readily seen that :-

But we could write :-

which is easily rearranged to obtain the required formula (A). In short we are just subtracting two angular velocities -- but these go by the reciprocal of the relevant orbital period $P$, hence the reciprocals in the formula.

So the figures given on Wikipedia for these three orbital periods $P_{syn}$, $P_{sid}$, and $P_{e}$ are very closely related by the formula (A), so that one of them has been calculated from the other two. Thus these are not entirely actual experimentally observed figures that have been quoted on Wikipedia (nor on WolframAlpha). For we could NOT expect the actual figures to be related so exactly by the formula (A) because of the simplifying assumptions (1) - (4) above that are required to derive that formula (the actual orbits are not perfectly circular and they are not exactly in the same plane).

A reciprocal type formula is also applicable to the synodic period between two planets orbiting the Sun (see Fig. 2 below), again with the simplifying assumptions of circular orbits in the same plane :-

This same type of formula is derived because :-

and so the above derivation applies very similarly. 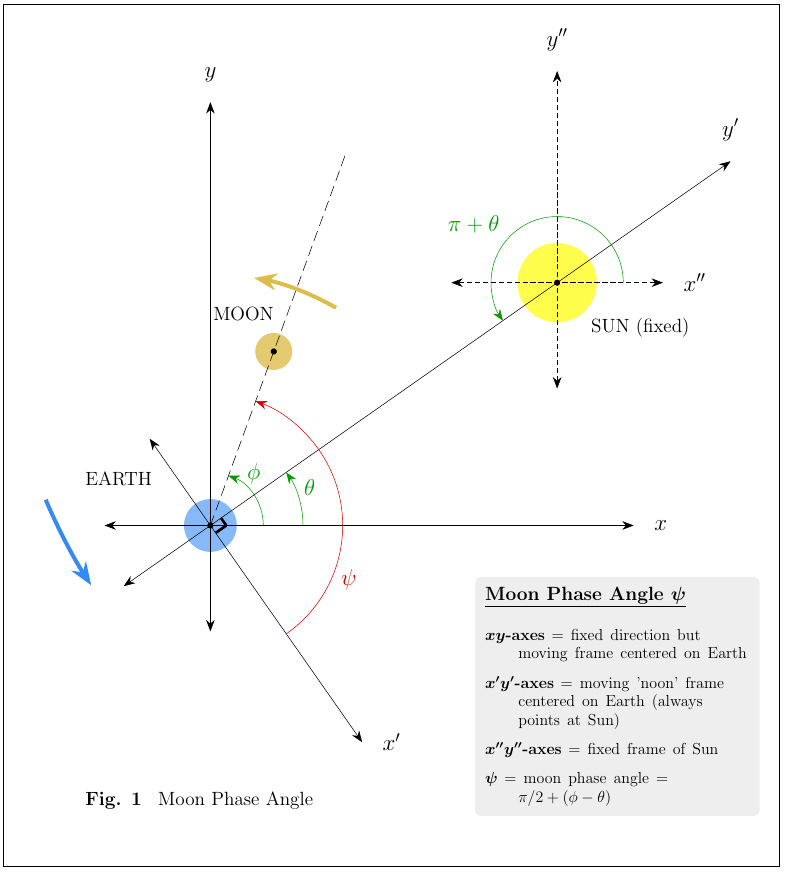 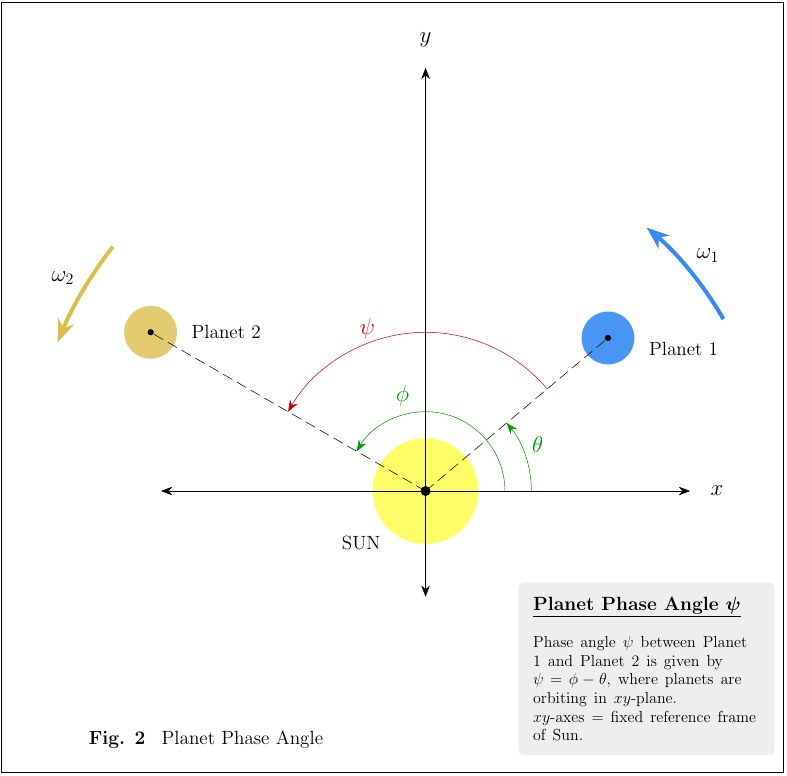 Not the answer you're looking for? Browse other questions tagged the-moon fundamental-astronomy .

1
Which approximations are required for the synodic period formula?

4
The RA and Dec of lunar poles
6
moonless night and lunar phase
1
What's the relationship between Moon phase and the Milky Way visibility?
5
Which is more rare: Lunar eclipse or Solar eclipse?
4
Solar / lunar positions in ECEF using SOFA C libraries
3
When will solar eclipses become lunar transits?
2
Happy lunar new year! When will "sunset" happen for Chang'e-4 and Yutu-2?
3
Does a lunar occultation of Mars happen twice a year?
18
What is this 877-year cycle in the orbits of Jupiter & Saturn, and this multimillion-year cycle in the lunar orbit?
8
What is the difference between New Moon day and Lunar Eclipse?