The sun lines up with this fountain, which is at the Salk Institute, during the equinoxes. Will precession eventually throw the alignment out of whack? 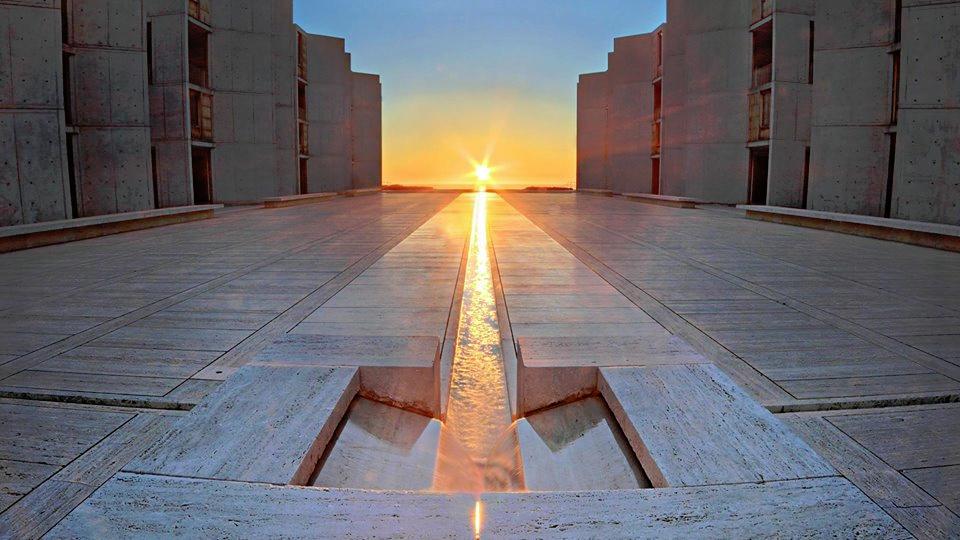 The fountain will always line up with the Sun during the equinox. The precession of the Earth's axis will not change this fact. What it will change is exactly when the equinox happens. However, the fountain doesn't care about when the equinox occurs, only that it does and when it does happen, it will be pointed at the Sun.

The alignment should be maintained. In general, at the equinoxes, the sun rises due east and sets due west. As East and West are determined relative to the Earth's axis of rotation, it doesn't matter that the direction of the axis changes due to precession.

As an example, Stonehenge is aligned to the midsummer sunrise (OK, not the equinox, but it makes the point), and has been for 4000 years (I haven't checked when the relevant part is thought to have been built).

Just to add some detail to the above.

If you set the 21st of March and September as the equinox dates, which is mostly not done, but still occasionally, and, also, not astrology but more, cultural, so probably not worth mentioning, but by the 21st or 22nd dates, then there's some shifting. As others have said, the date and time shifts, the sun passing over the equinox point always happens, every year, pretty close to March and Sept 21.

Variation on the specific date and time changes not just because of orbital cycles but also, time-zones and leap-years. see here.

on the Milankovich cycles

Changes in the Earth's eccentricity cycle affects the inequality of length of the 4 seasons. For now, Winter lasts 88.99 days, Spring, 92.75 days, Summer, 93.66 days and fall 89.85 days. A year remains pretty much constant at 365.242 days but the length of the seasons varies slowly over the periods of two Milankovich cycles, eccentricity and axial precession.

As a curious sidebar, the lengths of the months are somewhat adjusted to match this seasonal variation. Spring and Summer both have 2 months with 31 days. Winter has 2 but also 28 day February. Fall has only 1 month with 31 days.

The Axial precession cycle that you asked about, the 25,771 year cycle, often abbreviated to 26,000, right now it's closely lined up so that if lands only a couple weeks off the winter solstice. In 13,000 years or so it will line up near the summer solstice.

This means, 13,000 years from now, winter will be the longest season and summer the shortest. The Spring Equinox will "spring forward" a few days and the fall equinox will fall back a few days. This happens gradually, not all at once, but in 13,000 years, we might see the Spring equinox around March 25-27 and the fall around September 16-18, as a ballpark guess. This variation will be even more pronounced as the Earth's eccentricity grows. which right now it's not, but in 180,000 or 200,000 years, there's a chance, we'll get spring equinox in April. (Not making a guarantee, just saying there's a chance).

But as others have said, the equinoxes will always line up perfectly with the structures, in as much as the structures are correctly built. But the dates when they line up will change, over Milankovich time, then change back.

Tried to clean that up and remove the earlier errors.

Not the answer you're looking for? Browse other questions tagged the-sun .

10
What is the current estimation for how much time the Sun will function properly?
3
Precession of the Equinox
3
Is there any formulae to calculate whether the sun will depress 18 degrees or more below the horizon on a certain day / location?
3
What is the great (platonic?) year?
3
Is the equinox Sun always at the same zodiac sign in the ecliptic belt?
2
Why is the equinoxes only 2 days and not more?
1
Date of solstices pre-0 AD
3
Is the equinox absolutely true east everywhere?
17
Problem regarding the absorption lines of the sun
3
Where will the frost line be when the Sun becomes a red giant and what effect will it have on the solar system?