How do we know how the Sun (or any star, for that matter) will evolve?

The evolutionary path of the Sun has been described in some detail, and, subtle differences aside, it's been described as such for decades - the Earth-engulfing red giant stage, the helium flash, etc.. It would seem that the knowledge necessary to make such a prediction has been around since the 60s, if not earlier.

How do we know it will happen, and on the timescales described? If we make some measurements/estimations of the mass and composition of the Sun, and use our understanding of nuclear physics - energy of fusion and so forth, and an understanding of Newtonian physics (or do we have to invoke Einstein?), do the predictions just inevitably fall out?

Could the predictions be wrong? Is there any significant measure of uncertainty, perhaps due to sensitivity of certain calculations to initial conditions, etc?

The thing you are not taking into account is that our predictions for the future evolution of the Sun are not based on our understanding and observations of the Sun alone. They're based on our understanding and observations of all the stars we've ever looked at. The thing is, stars of the same mass and composition must necessarily evolve in the same way. So we can look out at other stars and find some which are more or less the same as our own, but might be farther along the evolutionary track. We can study these stars and see what is happening to them. By conglomerating a lot of data about many stars at many different points in their evolutionary life cycle, we can put a coherent picture together for our own Sun.

Scientists have spent a lot of effort to create stellar evolutionary models. To do this, they put together the multitudinous information gleaned from the tens of millions of stars we've observed, add in a lot of math and physics representing the physical processes occurring in these stars and what you find is that the "predictions just inevitably fall out". There are many stellar evolutionary code bases out there you can find. For example, Pols et al. 1998 applied stellar evolutionary code to clusters of stars. A figure pulled from their paper is shown below. It shows a Color-Magnitude diagram of the M67 open cluster of stars, along with predictions of the evolutionary track of those stars. There's of course some variance as every star is not exactly the same, but overall, you can see that the stars follow the predicted evolutionary track pretty well. 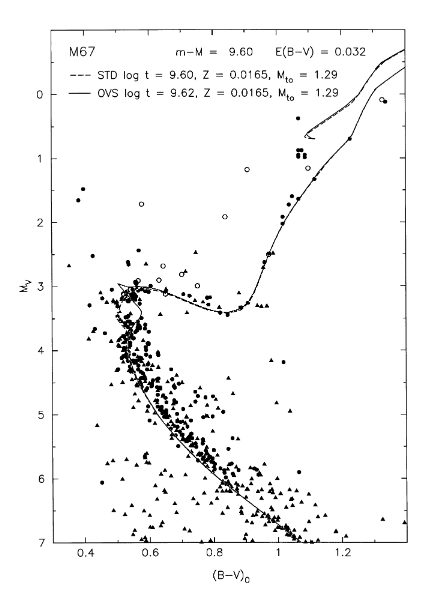 Once you have a well calibrated stellar evolutionary program, it's not too difficult to apply that program to our Sun. There will be some unknowns and some variance, e.g., we might not know the physical extent of the red giant phases' expansion, but we know it will happen.

It is possible to numerically integrate the equations of stellar structure over time to figure out how a star will evolve. Some basic informed "guesses" about the central and surface properties of the model star need to be made, but as the model is created, future iterations can use different values for these, making the model more and more accurate until it is self-consistent.

The equations are based on several key assumptions (for which there is a good amount of evidence). Here are a few:

There are hundreds of billions of stars in the Milky Way alone. Clearly, we don't know all of them - and the Gaia spacecraft will only observe (still astonishingly many) one billion of them - but we do have observations for a number of stars like the Sun and stars that are somewhere along evolutionary tracks very similar to the one it is predicted the Sun will take. Data from these stars confirms many models (while showing that others need modification).

Thanks to repeated comparisons of theory and simulation to real life, the models have been refined over time, and more and more evidence has been garnered in their favor. There is always a strong interplay between theory and experiment, and the model predictions match what we see in the sky, while the things we see in the sky give us better and better data for making newer, even more accurate, models.

. . . we have good theories for the processes that make stars possible, one of which is nuclear fusion. We know very well how nuclear fusion should change elements over time and thus how the composition of any sample of material should change. We also know that fusion is the process the powers stars; therefore, we can create models that show how fusion in a star should cause it to change and evolve over time. Those models then match empirical data.

Ignoring the minute possibility of something like a neutron star colliding with our Sun sometime during the next few billion years, yes, it's an inevitability. There's some debate about borderline cases such as low metallicity stars ("metal" to an astronomer means anything but hydrogen or helium), and low or high mass stars. Our Sun does not fall into these borderline cases.

Not the answer you're looking for? Browse other questions tagged the-sun stellar-evolution or ask your own question.

11
What is the current estimation for how much time the Sun will function properly?
9
How likely is it that the Sun will destroy our electric society?
6
What's the bleeding-edge model for how Population III stars are born and evolve?
0
How do astronomers know when the Sun will die?
4
What would happen if a Sun-like star were to consume a Jupiter-like planet?
21
Do we know a star that is similar to the Sun when it would be a red giant?
5
Can the Sun contain degenerate matter?
1
How large will our Sun get during the red giant phase (ie which planets will it engulf) before the helium flash?
2
How does the stellar evolution for low and intermediate mass stars differ?