Changing Appearance of the Moon During a Single Night

I have noticed that the inclination of the moon at a given location varies throughout the night. From the UK, the terminator in a half-moon is clearly sloping from top left to bottom right early in the evening, but later on, as the moon is setting, it is clearly sloping from top right to bottom left. I know that the shape of the moon changes from night to night, but I just can't see why the inclination would change during a single night. I know that the appearance of the moon is due to a combination of the tilt of the earth's axis and the latitude of my position (the moon slopes oppositely in the southern hemisphere), but I just can't visualise in three dimensions exactly what is going on. Please can you help me to do this.

A relatively simple way to understand why the moon axis seems to rotate is to observe that the stars do the same thing. Watch over several hours as Cassiopeia - located near the North Star moves and you'll notice the orientation changes. Cassiopeia, for example, is shaped like a "W" when lowest in the sky, a "3" as it rises, an "M" as it reaches its highest point overhead, a Σ (Sigma) as it is setting. Below is the constellation as it appears lowest in the sky. 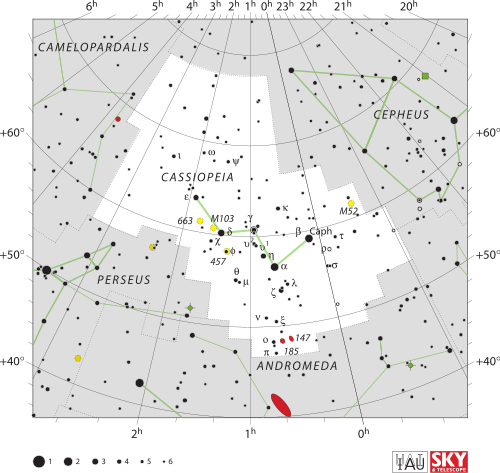 Because Cassiopeia is close to the north celestial pole observers in the Northern hemisphere can watch the constellation rotate through all 360 degrees through the year. Orion, however is near the celestial equator and the amount of apparent rotation relative to the ground is always less than 180 degrees and as little as 45 degrees - depending on your latitude.

The moon can be found anywhere from +28.5° to −28.5 (above or below) the celestial equator - its position relative to your observing latitude dictates the maximum amount of apparent rotation.

Adding to Chuck's answer, you may be interested in looking into the parallactic angle. Peter Meadows discusses it in a page on his site. There are a couple of things to keep in mind:

The naked eye view of the Sun just after sunrise and just before sunset at one the equinoxes and for an observer at at London (51.5°N, 0.0°E) . The two rectangles show the field of view for an alt/azi and equatorial telescope mounting.

2
The movement of the moon