Using data from Hipparcos is it possible to calculate Radial Velocity. If we take 19 Leonis as example, RV is -3.70. Is it calculated from Proper Motion? Can I ask that any formulas be done in long hand please, i.e. how you would enter it into a standard spreadsheet rather than with symbols etc.

Took the advice and found CRVAD2.dat ( http://cdsarc.u-strasbg.fr/viz-bin/Cat?III/254 ). The following line comes from CRVAD2.dat file and when I looked up HipId 40829 which is below, the RV value is -3.70 which matches the link above.

Whats the reason for the discrepancy, CRVAD2.dat is an old version like there's two Hip data files (97 and 07)? 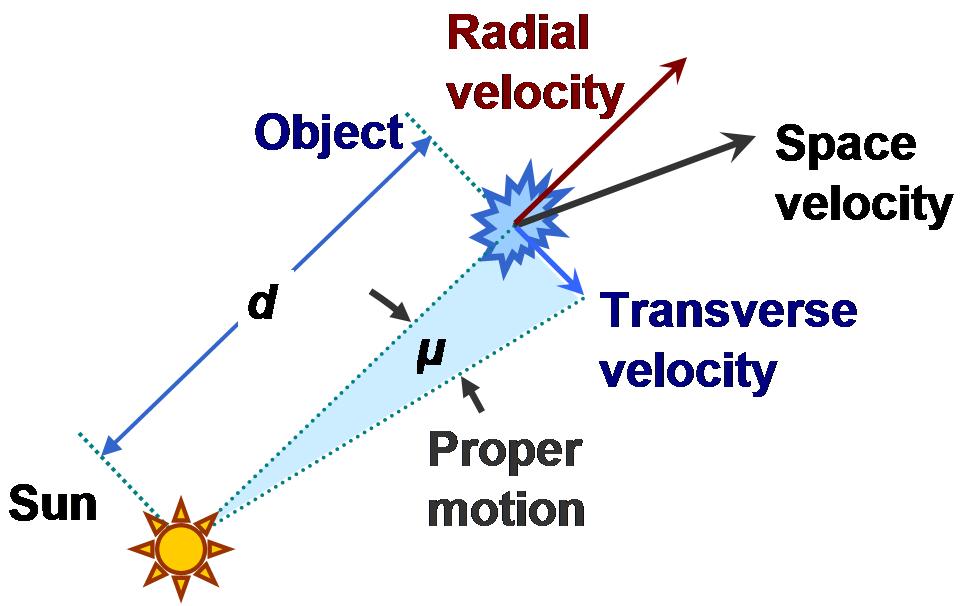 Radial velocities are actually calculated by measuring the Doppler shift of the spectra of stars, but this is not very easy, and you need the raw spectrum data. You are probably best off just taking the values of the radial velocity from that site for example.

For your purpose, I would suggest you follow the advice of the other answers - proper motion measures the component of velocity perpendicular to a line joining the Earth and the star and won't ordinarily tell you anything about radial velocity.

Nevertheless, I wanted to point out to the interested reader, that it has long been known that radial velocities can be estimated from sufficiently accurate astrometric (parallax and proper motion) in at least three ways. In the forthcoming Gaia era, these might be useful, and the third of these methods has been used with Hipparcos data to find radial velocities in nearby clusters.

These geometric (as opposed to spectroscopic) methods are described by Dravins et al. 1999, and are of great interest because they allow the study of phenomena that affect spectroscopic methods (e.g. General Relativistic redshift). The methods are - and I summarise here; the full details are in Dravins et al.

Method 1: Look for a change in parallax with time.

Method 2: If a star is moving away as well as at right angles to us, then the proper motion will change with time. This is both as a consequence of the change in distance, but also due to the change in perspective as the apparent position of the star changes.

As you might imagine, the first two effects are small on the timescales of the few years of a space mission. They may become possible to apply to nearby stars when we have the full Gaia astrometry dataset in a few years.

Method 3: If a star belongs to a known moving group or cluster of stars, then its radial velocity can be deduced from the total velocity of the cluster, the proper motion and the parallax, since the vector sum of the radial velocity and tangential velocity must equal the total velocity. This method does not measure a rate of change and requires less precision. It can and has been used for nearby, large clusters and kinematic groups of stars. Obviously it can only be applied to stars that are known or suspected group members.

As user2998 correctly states, one cannot measure the RV from proper motion, simply because they are perpendicular to each other.
What needs to be done to get the RV is to measure the Doppler shift of one or several spectral lines relative to laboratory lines in the atmosphere of a given star. This is usually done from the ground in follow-up surveys. This means that once a star is identified and has measured proper motion, there are people on the ground that take the star catalogues from e.e. Hipparcos, find it again (due to known proper motion) and measure its RV.
You can find links to the paper where your value of $-3.70 km/s$ originates from on simbad, directly below this number.

Now there is the follow up mission for Hipparcos, which is called Gaia, which itself has limited RV capabilities. But also for this satellite there are already ground follow-ups in motion.

Not the answer you're looking for? Browse other questions tagged star hipparcos .