A spaceship with mass $m = 25\:kg$ is moving toward a red giant with $M = M_{sun}$ and $L = 1000\:L_{sun}$ (L: Luminosity). It is moving on a line (so this is not an orbital question). When it gets too close to the red giant, it's sensor open its solar sails (they get and then reflect the light completely), hence the radiation pressure help it to escape from the red giant (on the same line). Find the area of solar sail. (It is from National Olympiad of an Asian Country)

In another book it is:

2 is because it gets the light and then reflecting it.

I want to know what is the right solution for calculating radiation pressure?

I must say that the below picture is also with the question but in the books, it was used for another part of the question which is not my problem and I didn't mentioned it above. 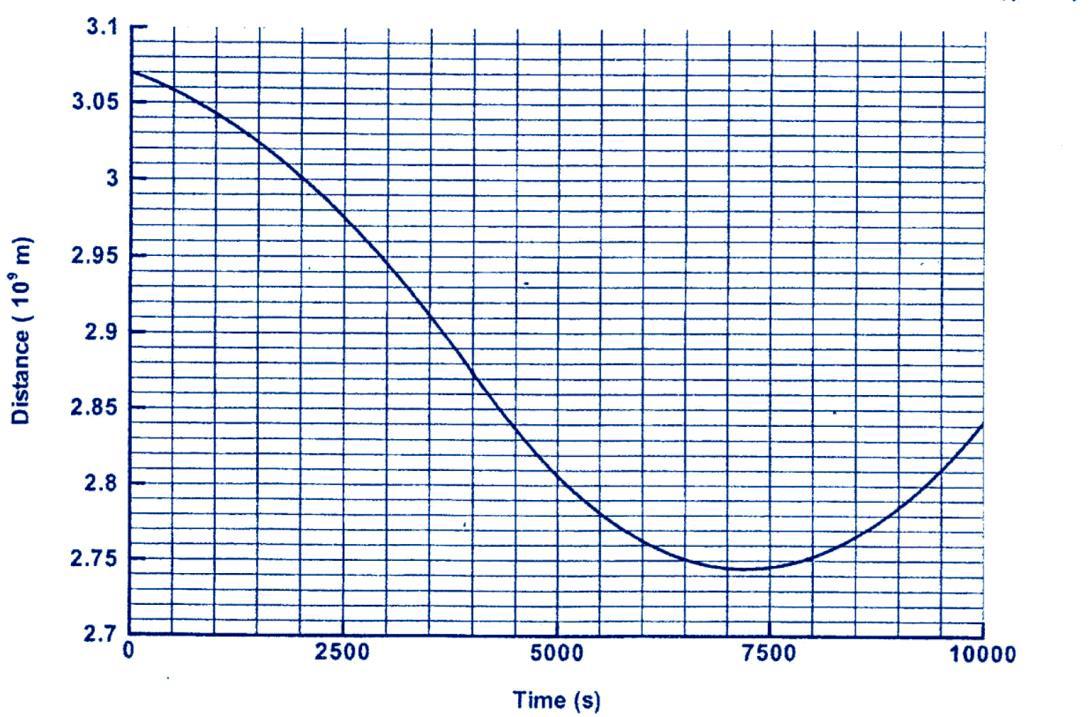 I might venture into some math which is slightly above what you need, but I wanted to show you the reason behind the correct equation to use. To start with, the pressure due to radiation, in the most general sense, is given by

The top equation represents the case where some light hits your object and the light gets absorbed, and the bottom equation represents the case where light hits and bounces off your object (really it's re-emitted). Your case is the bottom equation so I'll work with that from now on and drop the reflection subscript. Without needing to explain exactly what it is, just accept that $\langle S\rangle$ is the average energy of the photon being absorbed or emitted. Now, that's for a single photon. If we have a lot of photons, generally the energy distribution of all the photons together is said to be described by some function, such as $I_\lambda$ (the subscript refers to wavelength). We can define the full pressure then by not only integrating over all wavelengths of all the photons, but importantly all the directions that the photons may hit or be emitted.

Note now that we've replaced $\langle S\rangle$ with $I_\lambda(\lambda)$. Also, since we're assuming this is pressure on a flat surface, we're not integrating over every angle, but only half of them $-$ any photon, in order to hit the solar sail, has to come from the direction the sail is facing, and can only reflect in the direction it came from, i.e., we're discluding photons "behind" the sail. For that reason, the $d\theta$ integral only goes to $\pi/2$.

If you don't understand the math at this point, that's fine but here's the important takeaway: If we only integrated over all wavelengths, you'd get the equation without the three that you listed. What that means is that the equation without the three doesn't take into account all the possible angles and orientations of the incoming photons. It simply assumes all your photons hit your surface perpendicularly, and then bounce off perpendicularly. This is of course not physically accurate as the photons can come in from a variety of angles.

If you do the angle integrals out, you find that you get the following:

You can see there in the last line that the three popped out of those integrals over all the possible angles (specifically the $d\theta$ integral). Now, you get the rest of this by assuming some sort of function for $I_\lambda(\lambda)$ which describes the energy distribution of the photons as a function of wavelength. Since your light comes from a star, you know that's just going to be the Planck distribution (specifically the equation for $B_\lambda(\lambda,T)$). This integral is non-trivial, but if you again run through the math, you find

This is the true equation for radiation pressure on the solar sail, assuming reflection is occurring. This includes the three because we need to account for the photons hitting and bouncing off at all possible angles (for the solar sail). Note one important differences here is that my equation already has the extra "2" due to reflection factored in. Your last equation differs from mine in that it throws in that extra "2" for reflection. So either it erroneously included the factor of "2" twice, or (more likely) its account for reflection at every angle, not just all possible angles. Remember above, we only integrated the $d\theta$ angle up to $\pi/2$ for the reason explained there. If we integrated up to $\pi$ to include every angle, then we'd get an extra "2" as well and my equation would match your last one. Your solar sails though, don't receive or re-emit photons at every angle, and so my equation differs by that factor of "2".

I actually think you are supposed to assume the solar sail is unfurled while the spaceship is still quite far from the red giant (despite "too close"), because otherwise the problem is extremely difficult. At least if you are far from the red giant, you can assume all the light is incident along the normal to the sail, and if it's a mirror, it will also reflect back the same way. In that situation (only), you can simply take the radiative flux density (L / 4pi D^2), divide by c (to get a momentum flux), multiply by the area A, and double it (to account for straight-back reflection), resulting in an expression that is like zephyr's except without the 1/3 (which comes from assuming we are only talking about one instant and it is right at the surface of a blackbody with no limb darkening, none of which we should expect from a red giant), and my expression also has a 1/D^2 which is actually important in what follows.

The reason I think this is what is intended is because only then is D not essential to treat in detail. It then becomes easy to figure out what the area of the sail needs to be, we can do it with energy considerations. At large D, the radiative force will be a constant multiple of the gravity, and that multiple needs to be "2" in order to get the spaceship to go back to infinity where it came from (assuming either the original speed at infinity was small, or that your goal is to return so whatever that original speed was, as these are the only ways you don't need to know that original speed). The gravitational force is GMm/D^2, so P times A needs to be twice that, where P is given above. The answer comes out A = 4pi G M m c / L, which is independent of the D where the sail is unfurled.

The reason it's much harder if you don't make D large is that the incident flux is not along the normal any more, so you need an r-dependent factor that ranges from 1/3 right at the surface, to 1 farther out. You'd have to integrate the role of that factor to get the necessary A, whereas my answer doesn't need any of that. What's more, if you unfurl the sail right at the surface, the spacecraft will enter the star, and the radiative environment becomes even more complicated, not to mention possibly destroying the spacecraft.

So I don't think any of those expressions are what you want, because you can't just get the force at the surface, you need to know the force that would succeed in getting the spacecraft to turn around, so it must exceed gravity by a factor that would be very hard to compute unless you take D large.

16
What is radiation pressure and how does it prevent a star from forming?
3
What is the ratio of cosmic microwave background radiation to normal radiation?
2
How much heat is generated from waxing and waning of reflected radiation from the Sun?
2
Compton scattering of high energy radiation
5
A question about calculating the radius of a comet
2
Can radiation affect gravity?
3
Radiation from Neutron Star impact?
3
Why does radiation not need a medium to travel?