I was recently asked a question for a lab I am doing for an astronomy class where we collected data from the M44 cluster (through Google Sky) and used information about the Hyades cluster to estimate the age and distance of M44. Anyways, I was asked whether there was more scatter in my M44 data or the provided Hyades data. There was definitely more scatter (see below) and I'm not sure how to explain it. I believe it is because of these reasons:

Am I on the right track or am I missing something? Any help would be great. Here is my data, the green is the collected M44 data. 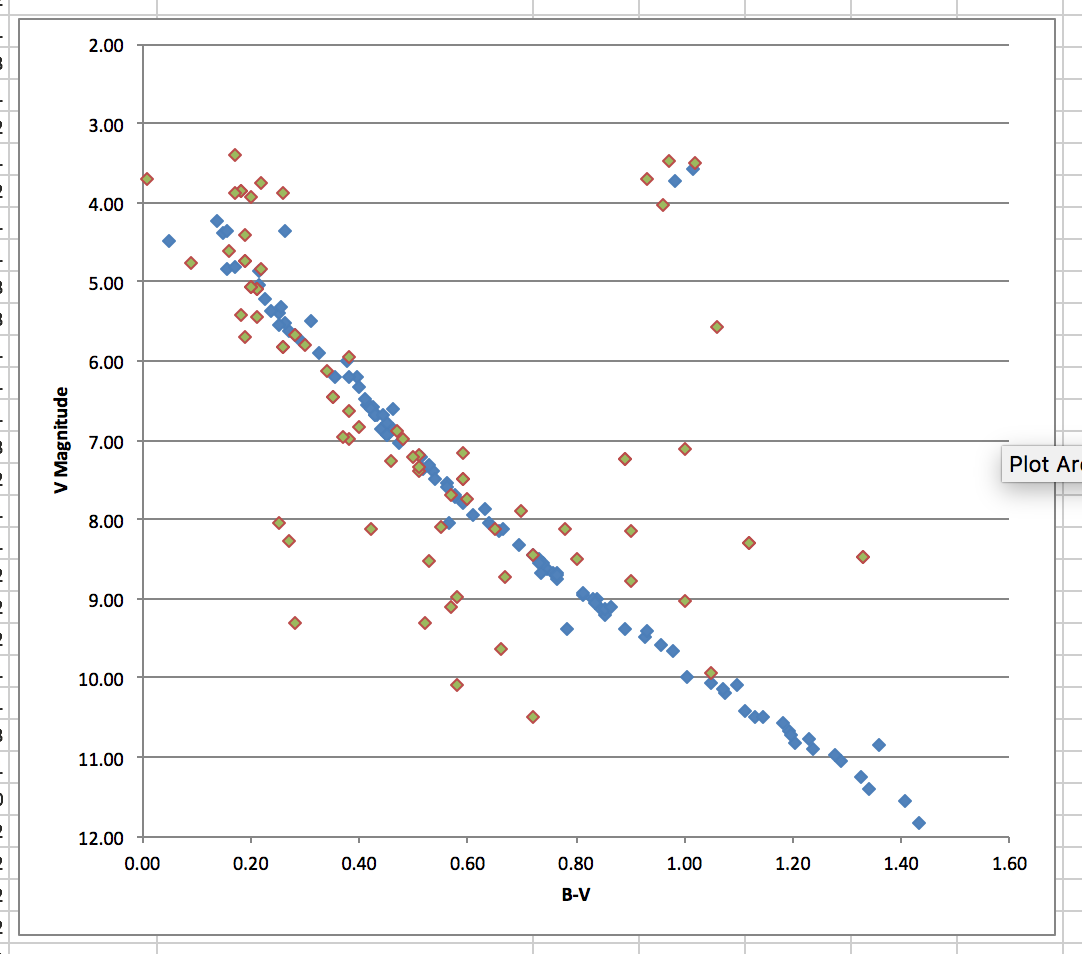 So, scatter in observational measurements of clusters in the HR diagram is mainly, in my experience, caused by 3 things: observational errors, binaries and contamination.

As you mentioned, there are observational errors, which are contributed to by the instrument, the data reduction, the weather conditions, etc. This error usually gets worse as you get fainter toward the limits of the telescope and looks like a "widening" of the CMD (seen here notably in magnitudes > 19).

The next problem is contamination. When you point your telescope at an object like M44 or the Hyades, it's not obvious which stars belong to the cluster and which stars just happen to be in the field of view, so you will get contamination from normal milky way stars (which will not follow that isochronic relationship that cluster members will). This looks something like this.

The final problem that I can think of is a binary population. A "photometric binary" star is what happens when two stars overlap in an observation. This happens quite often in clusters, since there are "intrinsic binaries" which are stars that are very close to, and orbit each other. They are usually different masses, and hence different colors. This is usually seen as another line, next to the main isochrone line, that is a little redder than all of the other stars and would look something like this image.

Now, this scatter looks far too big to be measurement error alone, modern telescopes will have magnitude errors of much much less than a magnitude (think milli-magnitudes, depending on specifics -- I'm unfamiliar with Google Sky, but any telescope is going to do better than a magnitude error, for reference the magnitude system is based on eyesight "just-noticable-difference", so your eyes have an approximate error of one magnitude).

And since the scatter doesn't follow some other systematic relationship, I would discard the binaries idea.

The most reasonable explanation to me is, like you said, foreground contamination.

Not the answer you're looking for? Browse other questions tagged star amateur-observing star-cluster or ask your own question.

8
Astronomical databases for machine learning?
6
Can we see the stars at the edge of the Milkyway?
0
Plot SuperWasp Lightcurves
0
Data for spectrum of Wolf-Rayet stars
2
How do we know what the biggest star is?
3
Mass estimate for cluster NGC2516?