In the mid 1970's, Franklin and O'Meara saw persistent "radial spoke-like features" in the rings of Saturn, that should not have existed due to the differential rotation of the rings. A publication on this observation was rejected by a journal apparently on the grounds that the phenomenon was considered to be illusory (c.f Sciparelli/Lowell's Martian canals?). 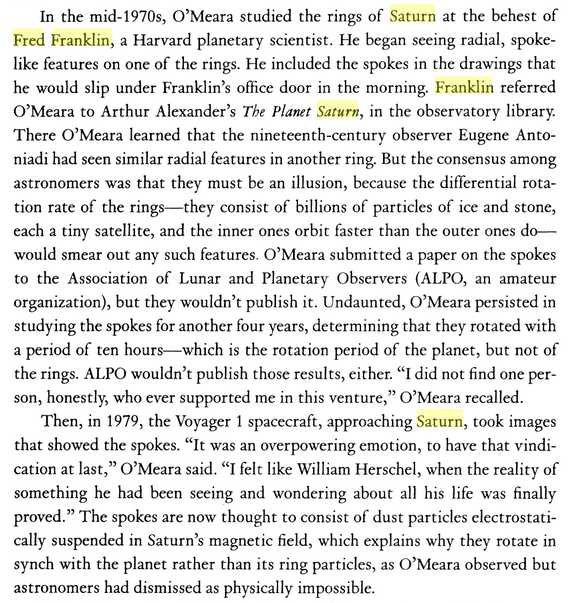 From "Seeing in the Dark: How Amateur Astronomers Are Discovering the Wonder" By Timothy Ferris.

My question is, how reliably were these features visible from the ground-based telescopes of the day? Could sufficiently strong evidence for the existence been obtained before images from space probes? Was the rejection of the paper reasonable in the historical context in which the paper was submitted?

Bryan (2007) gives a number of reasons why O'Meara's discovery was largely discounted:

Not the answer you're looking for? Browse other questions tagged amateur-observing saturn planetary-ring or ask your own question.

31
How dense are Saturn's rings?
10
How are the newly discovered Janus/Epimetheus rings different from the other rings of Saturn?
3
Why are distant galaxies not visible in the observable Universe?
11
Are satellites orbiting around earth visible to the naked eye?
5
What are the objects that are visible from a city?
1
Do objects that are invisible to the naked eye occlude much of the stars to Earth based observers?
6
What are the periods of Saturn's rings?
1
Throughout the year, are all parts of the night sky visible from any given point on Earth?