What is $\omega$ and $\tau$ in this celestial sphere

S is the sun and W is the west.

Also I want to know how do they effect on the shadow of wall which is built in direction of "$SCP$ to $NCP$". 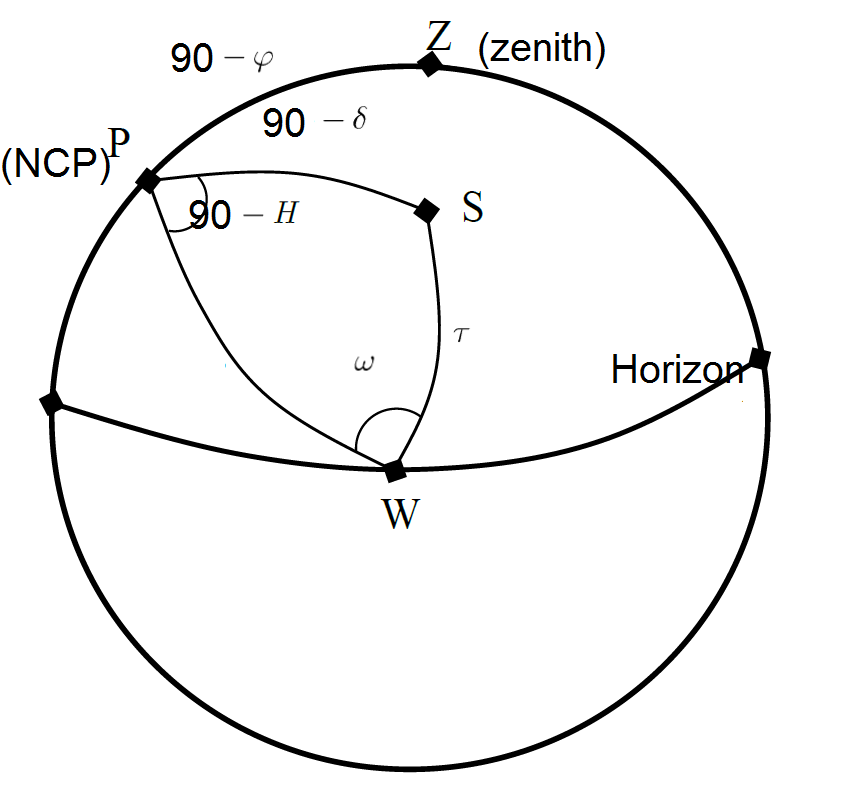 There seems to be very little to go on here.

"Zenith" and "Horizon" are easy to understand, it suggests that this is a projection of the sky (and ground) In that context "W" would appear to be "West", and you give that "S" is "sun". The horizon is curved. If you project the entire hemisphere the horizon would go straight across this isn't a complete hemispheric projection.

If we are looking West, then North would be to the right, and South to the left. The point P seems to be identified with NCP. The first guess would be that N of NCP means North, but this contradicts the reasoning that North is on the right. You mention SCP in the text, but it isn't in the diagram. The sun appears to be West, or just North of West, which is not an unusual but not impossible position.

The lines SW, WP and PS are curved. This may be to indicate that they are great circles on the celestial sphere. If so then $\omega$ is the spherical angle SWP and $\tau$ is the great circle distance SW, perhaps given as an angle with vertex at the centre of the sphere. Given three points on a sphere (in alt-az coordinates), it is a small exercise in spherical geometry to find the spherical distance and angles between them.

I'm not sure why you are being coy about the source of this. If you could link to the question from which this is taken the meanings of $\delta$ and H could be clearer. I guess the solution is an exercise in spherical angles, and projections from a circle to the plane

1
What is this graph showing?
3
Retrograde motion and Kuiper Belt Objects
3
How did TESS scientists choose which stars to observe at a “2 minute cadence” in each field?
8
Estimates for “undetectable” planets in extra-solar systems
5
Draw the celestial sphere for latitude, showing the star Sirius, Estimate the approximate date when Sirius rises with the Sun
1
How low can the sun be seen in the sky?
3
How does a cross dispersed spectrum look like in a reality (from echelle spectrographs)?
5
Is the Object in this Photo Mars?
3
Why wasn't CHEOPS data taken during passage through the South Atlantic Anomaly downlinked in this case, resulting in gaps in photometry?