What’s the object between the Earth and The Sun currently showing in Google maps?

If I select satellite imagery in Google maps and zoom out, the Earth is shown in space. It shows light/dark regions correctly updated, but there’s an object between the Earth and the sun. It looks too small to be The Moon. 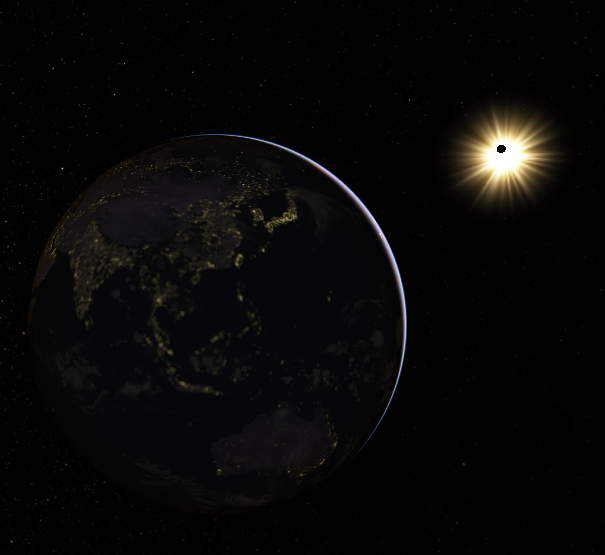 That's the Moon alright, and it's definitely real and definitely there. If you go outside and look at the Sun right now, the Moon will be almost but not quite on top of it, though it's impossible to make out due to the Sun's glare. If it were any closer we would have had a solar eclipse around the time of the New Moon that took place 20 minutes ago. Two weeks from now at Full Moon, it'll be in even better alignment, though on the opposite side of the Earth from the Sun this time, which will result in a total lunar eclipse. Mark your calendar!

Not the answer you're looking for? Browse other questions tagged near-earth-object or ask your own question.

1
Size and Mass of a typical "small" asteroid that impacts the Earth?
2
What is the extent of the "worldwide campaign" to observe near-earth object 2012 TC4?
2
Why is the difference between Apollo and Aten asteroids considered meaningful?
4
Has Hubble ever been used to try to image a near Earth asteroid?
5
Is there a distinction between NEOs and near-Earth asteroids? Is there a difference?
3
Has a near earth object in heliocentric orbit ever been bright enough to be visible to the unaided eye?
1
When thermal infrared space telescopes spot asteroids, are they seeing the body's own thermal emission, or reflected TIR from the Sun?