Recently I've explored an area on Mars' surface which one looks like huge hatch cap & hole, about 10 kilometers, between tons of circular craters.

The formation is very unique and strange to me. Somehow it has moved from original location and broke into two pieces then half part disappeared.

What do you think about it? 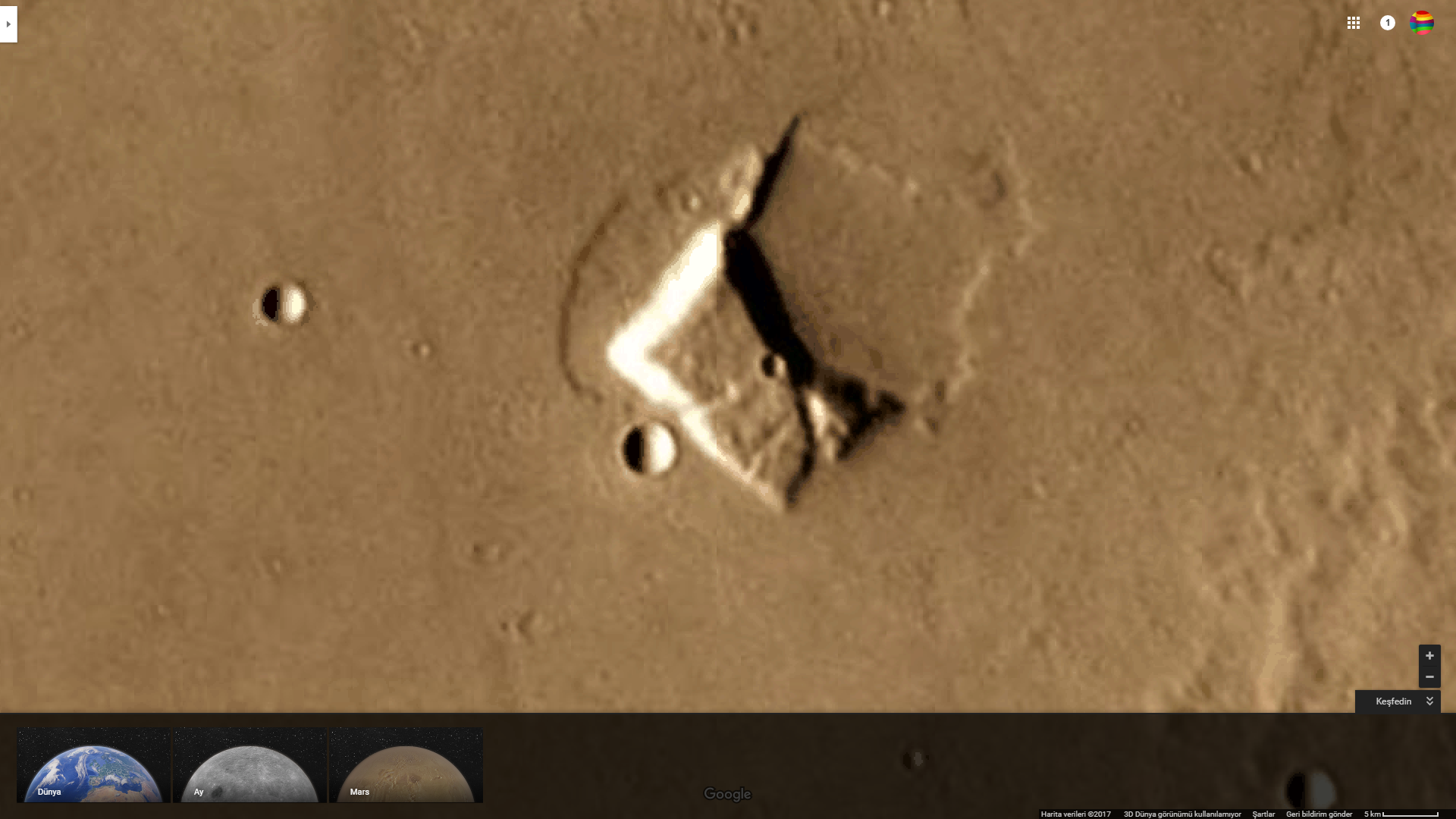 I looked at the image and annotated it based on what it most likely is: 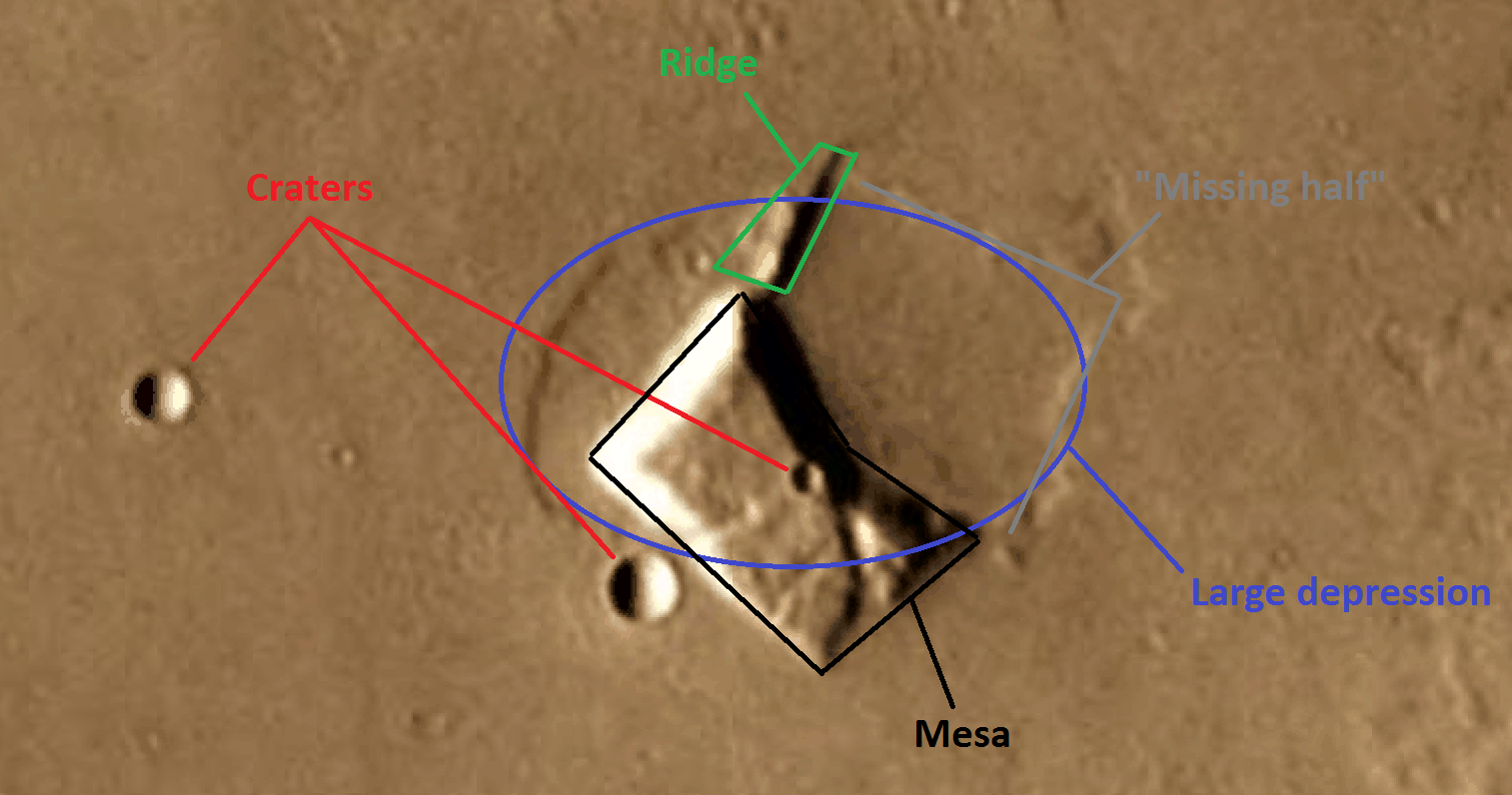 Here's a more likely hypothesis for what this actually is.

The blue oval contains a slight depression. It could be a number of things, including an old crater, a basin, or the result of the collapse of part of the surface. I'm actually a little bothered by the idea of it as an impact crater. We can see from the shadows on the western walls that it is only a little shallow, especially compared to other similarly-sized impact craters in the area. It's possible that it's a crater that was filled in with sediment.

If it's a natural basin, it could once have been a Martian lake - although this is quite speculative. It could also be the remains of a pit crater (there are many pit craters in the area), formed possibly from the cave-in of a series of lava tubes. Again, this is also speculative, and the depression is quite large, about 10 miles long on its major axis.

If one of these options is correct, the depression is not very mysterious. You've identified the grey part of it as the location of the other half of the formation, partly because it appears to be roughly the same size. I find this unlikely, for a couple reasons:

I think it would be clearer that this is actually part of the depression if the ridge enclosed in green were not there.

So if we assume that the outcropping is all that there even was of the object, we simply have to explain why it's so square. This really isn't that mysterious. There are plenty of other mesas in this cartographical area of Mars, designated the Elysium quadrangle by the USGS for mapping purposes. Here are some examples, which are similarly shaped:

Finally, we have the three large craters. They aren't too mysterious; craters are normal on Mars, and there are plenty, of varying sizes, in the Elysium quadrangle. The one reason the smallest stands out is because it is near the center of the northeast edge of the mesa. I'm reasonably certain this is just a coincidence.

Here's my hypothetical and likely not entirely correct timeline for this formation:

I think your identification is simply a case of pareidolia, which is the human tendency to find shapes and patterns where none really exist. A well-known Martian example is the Face of Mars.

Not the answer you're looking for? Browse other questions tagged mars surface crater or ask your own question.

5
Formation and capture of Mars' moons, Phobos and Deimos
6
What explains the distribution of new impact craters on Mars?
4
Mars looks like a blur
46
Why is Mars cold?
3
Age of Jezero crater on Mars
2
Ice filled craters on Mars
4
What caused these strange craters on Hyperion?
6
What are the dark spots in the "face of Mars" picture?
2
When were the spiders first observed on Mars?