I've heard that the more an object spins, the less of a true sphere it is. Using this logic most of neutron stars would be far from spherical,in general what shape are most neutron stars?

I don't think you'll find a single agreed shape for a rotating neutron star, not least because we don't have an agreed single model for the equation of state of the material in a neutron star (which is more complex than the name suggests).

I found one openly available paper (I'm sure there are more) which will give you a rough flavor for the complexity of modeling the shape of neutron stars. As you'll see the difficulty of no single model for an equation of state (EOS is the shorthand typically used) is just one issue.

I think "ellipsoid" should be considered as an approximation, although it's not something I'd consider written in stone.

Remember that to be useful a paper has to provide not just a model for what the shape might be, but also someone has to provide a way to measure this, which is challenging. I think one of the hopes for the new era of gravitational wave astronomy is to be able (eventually) to make more useful and measurements that help us investigate the interior of neutron stars.

So this is an open question, I think.

@Rob-Jeffries asked a question in comment about typical numbers for the deformation, and I answered in comment but comments can be removed by the system, so I'm adding that information as an edit :

In the first section of the paper I linked to they do quote fractional deformations as being typically $10^{−5}$, perhaps $10^{−4}$ in special cases and in extreme cases up to $10^{−3}$. However another paper gives an analysis based on crustal rigidity and a very small deformation for a particular neutron star. The paper I initially liked to describes an upper limit based on gravitational wave considerations, I think, rather than a general analysis.

Current understanding is that star is an oblate spheroid. An extreme example is shown below. 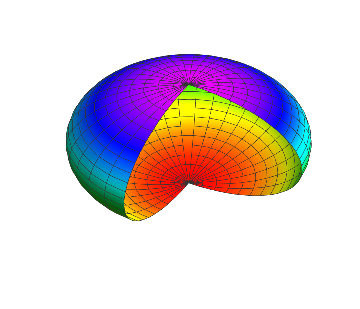 For a neutron star, the difference between the polar diameter and the equatorial diameter is around 10% and would look more like this: 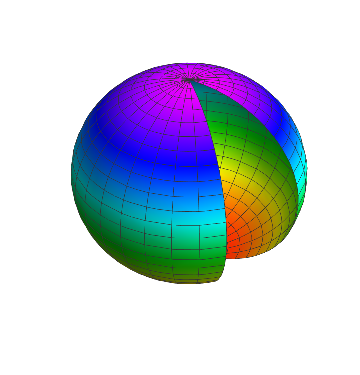 Logically speaking, they should be spherical as things with higher gravity tend to collapse into spheres. Neutron stars are extremely dense, and have high gravity. However, they are as far as we know rotating extremely fast as well (e.g. Pulsars). It should be that the faster they rotate, the more disc-like they would become (like an ellipse or slight possibility of more of a disc in extreme cases). So, depending on rotation speed, sphere for no to fairly high rotation speed, ellipse for high rotation speed, or possibly even a disc for extremely high rotation speed. There is room for debate here, but this is how I logically see it.

Edit: By ellipse, I mean a 3 dimensional ellipse, like an egg, but "squished the other way". Basically a sphere that has been stretched out on its equator. The faster it spins, the more it should be deformed (stretched along the equator). Dantopia's answer shows the shape I am describing.

17
If planets are ellipsoids why don't we have 3 diameters?
4
What happens when star spins too fast?
7
Modeling egg shaped stars
1
Question about redshift and effective gravity at the rotating neutron star surface

11
Why don't Neutron Stars form event horizon?
17
Is it possible to break apart a neutron star?
12
Is starquake unique to neutron star?
2
If there are neutron stars, would most stars be considered "proton stars"?
6
How could a neutron star collapse into a black hole?
7
Energy Source for Gamma Rays from Merging Neutron Stars
6
How do neutron stars maintain inhomogeneous surfaces and migrating "hot spots"? (e.g. SGR 1830-0645)
4
"Holy grail" future observation to confirm presence of neutron stars in the centers of massive, otherwise conventional stars? (Thorne–Żytkow objects)