It's a fairly simple question (at least in my layman's mind). Can a radio telescope that has no mirrors or lenses to capture visible light (to human eyes) still produce imagery like an optical telescope such as the Hubble? I'm talking just ROYGBIV light (no infrared or UV).

Can a radio telescope that has no mirrors or lenses to capture visible light (to human eyes) still produce imagery like an optical telescope such as the Hubble?

An even bigger problem with some radio telescopes is depicted below. 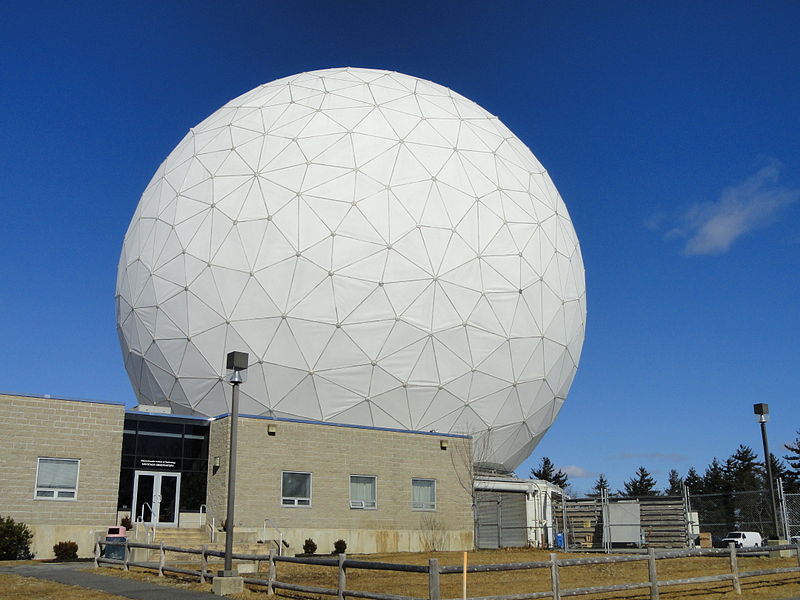 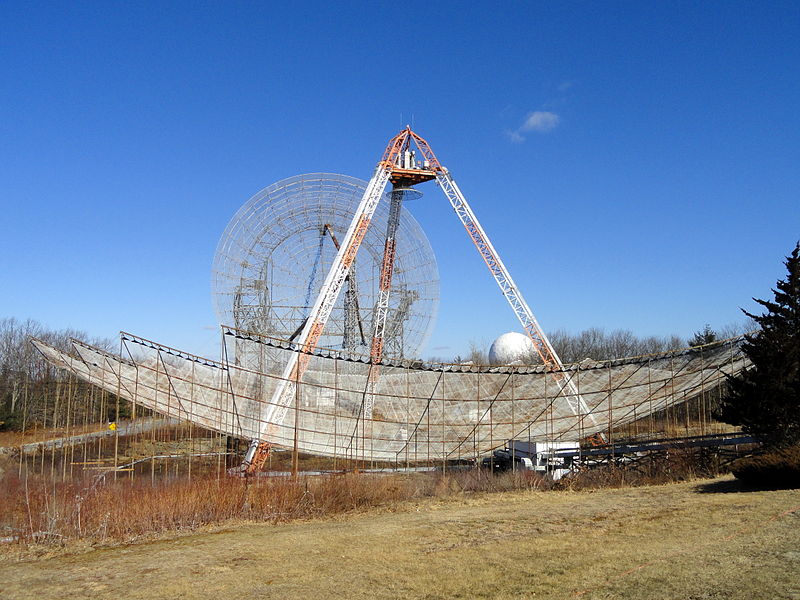 The fixed zenith telescope antenna in the foreground and the fully movable telescope antenna in the background are made of a wire mesh, making them see-thru in the visible portion of the spectrum. This wire mesh construction is quite common for long wavelength radio antennae because it allows the wind to blow through it. Shorter wavelength radio antennae are more likely to be solid, but those are oftentimes painted.

A wire mesh with wires separated by centimeters is very smooth to a meter long radio wave, as solid surface smooth at the millimeter level to a centimeter long radio wave. A surface with millimeter-scale roughness would make for an extremely lousy optical mirror. There is no reason to make a radio telescope antenna smooth to the visible portion of the spectrum, and there are many millions of reasons (i.e., many millions of dollars) not to do so.

Here are images produced with radio waves in RGB, but they are frequency-inaccurate. YES, Radio telescopes can produce imagery... NO, radios are not in the visible range, otherwise a talky walky areal would glow like a lamp when it transmits information. No, Radio antenna don't capture photons electrically and it is their voltage change which is measured, they can only get hot and malfunction from light.

The bubbles here are supernova remnants, on the right is a radio galaxy. 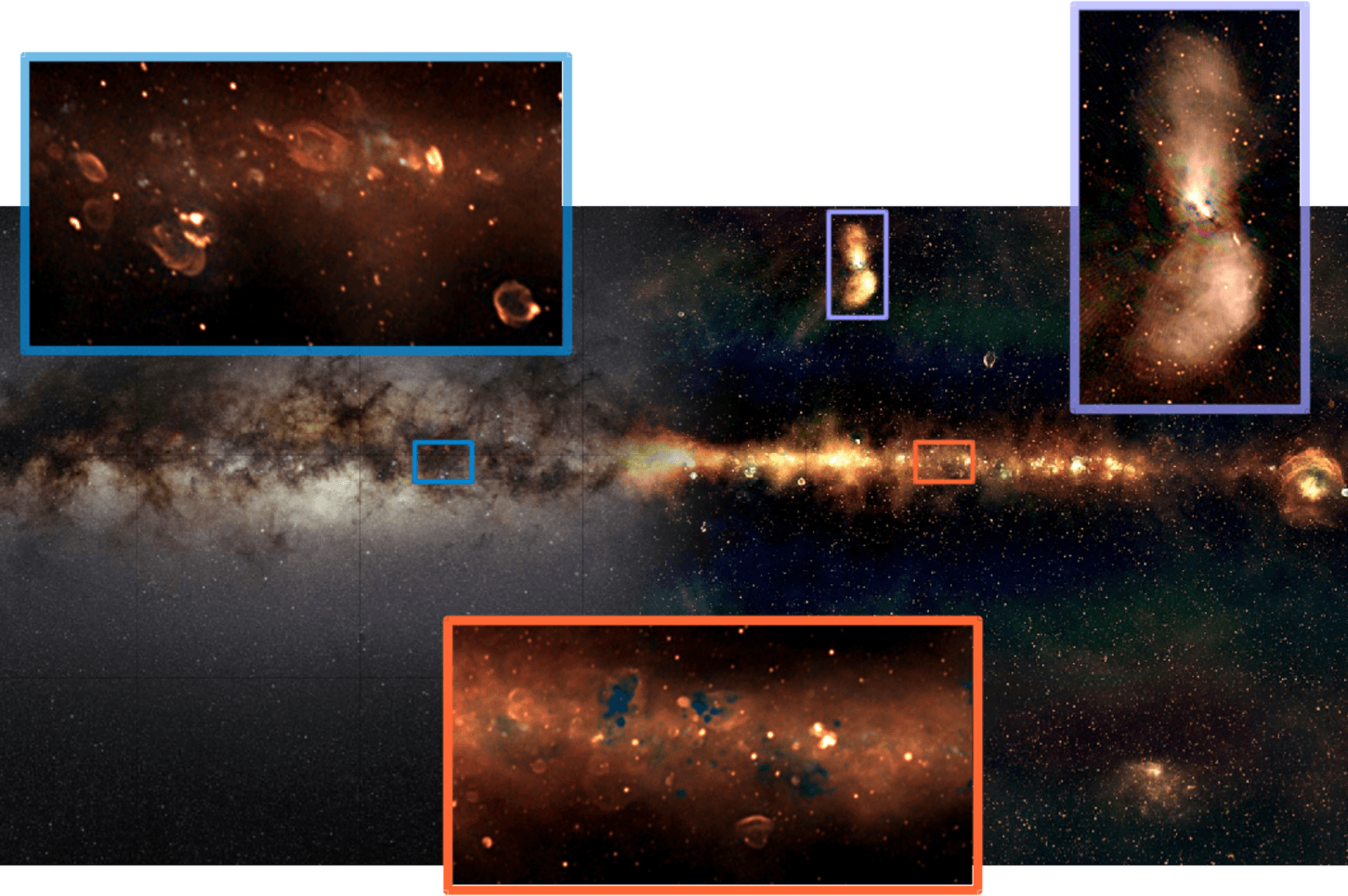 The colors here are red to green based on real radio wave length according to the researcher, however i think it's a compilation of multiple images of different radio periods. source is 70-230mhz = 1.2meters to 4meters 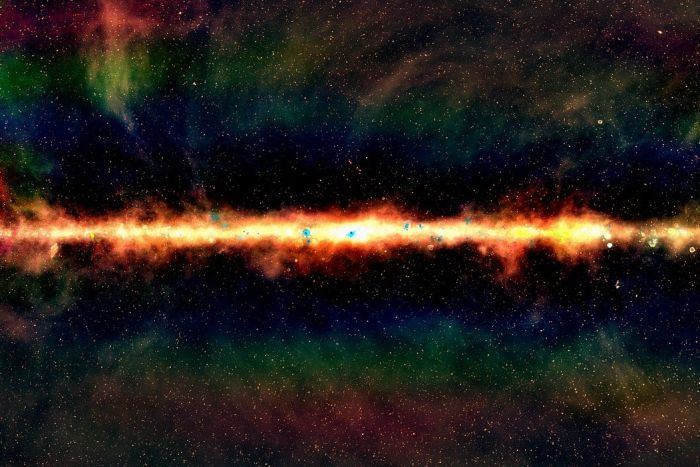 The answer is either "no, of course not," or "yes, in a pathological sense." A radio "telescope" captures photons which are capable of forcing electromagnetic responses in metal -- which is to say, the induced voltage caused by an E-M field. The statistical odds of a visible-range photon causing an induced signal of detectable level in a metal antenna are ridiculuously small.

Not the answer you're looking for? Browse other questions tagged telescope hubble-telescope radio-telescope .

1
What telescope is this, and how does it work?
8
Why was the (small) Hubble better able to find KBO targets for New Horizons than large adaptive optics ground telescopes?
4
Does the "photo of a black hole" taken by EHT actually depict a visible light-based scenario?
1
How are "parallel fields" implemented on the Hubble Space Telescope?
2
Is Sofia a radio telescope proper?
6
What (if any) capabilities of Hubble are unique and irreplaceable? What can it do that can't be done by any other ground or space-based telescope?
12
How are radio telescopes pointed?