Has the microwave background radiation ever been blocked in order to prove it's really from the sky?

A rather stupid question but I was just curious if the radiation could be virtual. From the instrument....sort of like virtual particles. In other words if you just build a sensitive microwave detector and stick it in a South African Durban Deep gold mine 5 miles under the earth would it do the same thing?

This is kind of old, but I've been reading a bit about CMB and stumbled on this question. If you go back to the original discovery of the CMB, they basically pointed their antenna at the sky and measured the microwave signal. They found one that was "isotropic, unpolarized, and free from seasonal variation" having run the antenna from July 1964 to April 1965. To calibrate the instrument they had a liquid helium cooled reference that they could switch into the receiving circuit. Blocking the CMB signal would be difficult because it's at 2.7 K, and most anything you would block it with would be a larger source (i.e. warmer). Instead, they used a liquid He reference source as a calibration, and then accounted for all other sources of microwave signal. The biggest "other" source was from looking through the atmosphere. You can read about this here: http://adsbit.harvard.edu/full/seri/ApJ../0142//0000420.000.html https://www.wmrc.edu/resources/docs/ch1.pdf

To really see what they did, you'd have to read more about that antenna, and there are references in the paper. The original publication is just a letter and so it is terse and refers to previous results instead of offering a detailed description.

...but if you're in orbit, it's easier to make something cold. For FIRAS on COBE, they actually had a device called XCAL (External Calibrator, I guess) that fit into the CMB receiving antenna like a trumpet mute. It looks like they held it at 2.7K and used it to calibrate by moving it into and out of the microwave receiving horn. That's pretty close to blocking the measurement signal. Here's the reference: https://www.researchgate.net/publication/2669262_Calibration_of_the_COBE_FIRAS_instrument

I think this is a good question, not necessarily doubting the experimental results, but asking if a simple sanity check that one would do with other kinds of measurements could be done with CMB.

It's really difficult. For light you could wave any convenient-sized blocker in front, even your hand for small apertures. But for this test you'd have to wave something colder than the CMB, which is only about 2.73 degrees above absolute zero. That particular test would be hard.

You could cool something to 4K with boiling liquid helium at 1 atmosphere, then hold it in front and see a uniform temperature appear, and that probably was done during the testing phase before satellites were launched.

However, the CMB has both coarse and fine structure, and so one can point the detector to different places and and see different patterns. On the rotating Earth, you'd have to keep moving the detector to see the same pattern. The pattern correlates only with the direction with respect to the celestial sphere, not with respect to the telescope or Earth.

That's not the same test as blocking the aperture and seeing the signal going away, but it makes a strong case.

note: current CMB imaging is done with imaging telescopes such as the South Pole Telescope for example (see @zephyr's answer), unlike the early measurements that were done by measuring a few points at a time (per wavelength band), for example COBE, WMAP and PLANCK.

Different observations have correlated the same patterns in the same zones of the sky, so it's the same as pointing two cameras at the same object and questioning if the object exists or if it's an artifact of the camera.

what is interesting is to wonder what the sea is like, if our own CMB is only one atom of the sea.

The receiver equipment was also carefully calibrated using this kind of terminology: Planck 2015 results. V. LFI calibration(150 additional authors not shown) We present a description of the pipeline used to calibrate the Planck Low Frequency Instrument (LFI) timelines into thermodynamic temperatures for the Planck 2015 data release, covering four years of uninterrupted operations. As in the 2013 data release, our calibrator is provided by the spin-synchronous modulation of the cosmic microwave background dipole, but we now use the orbital component, rather than adopting the Wilkinson Microwave Anisotropy Probe (WMAP) solar dipole. This allows our 2015 LFI analysis to provide an independent Solar dipole estimate, which is in excellent agreement with that of HFI and within 1σ (0.3% in amplitude) of the WMAP value. This 0.3% shift in the peak-to-peak dipole temperature from WMAP and a global overhaul of the iterative calibration code increases the overall level of the LFI maps by 0.45% (30 GHz), 0.64% (44 GHz), and 0.82% (70 GHz) in temperature with respect to the 2013 Planck data release, thus reducing the discrepancy with the power spectrum measured by WMAP. We estimate that the LFI calibration uncertainty is now at the level of 0.20% for the 70 GHz map, 0.26% for the 44 GHz map, and 0.35% for the 30 GHz map. We provide a detailed description of the impact of all the changes implemented in the calibration since the previous data release. 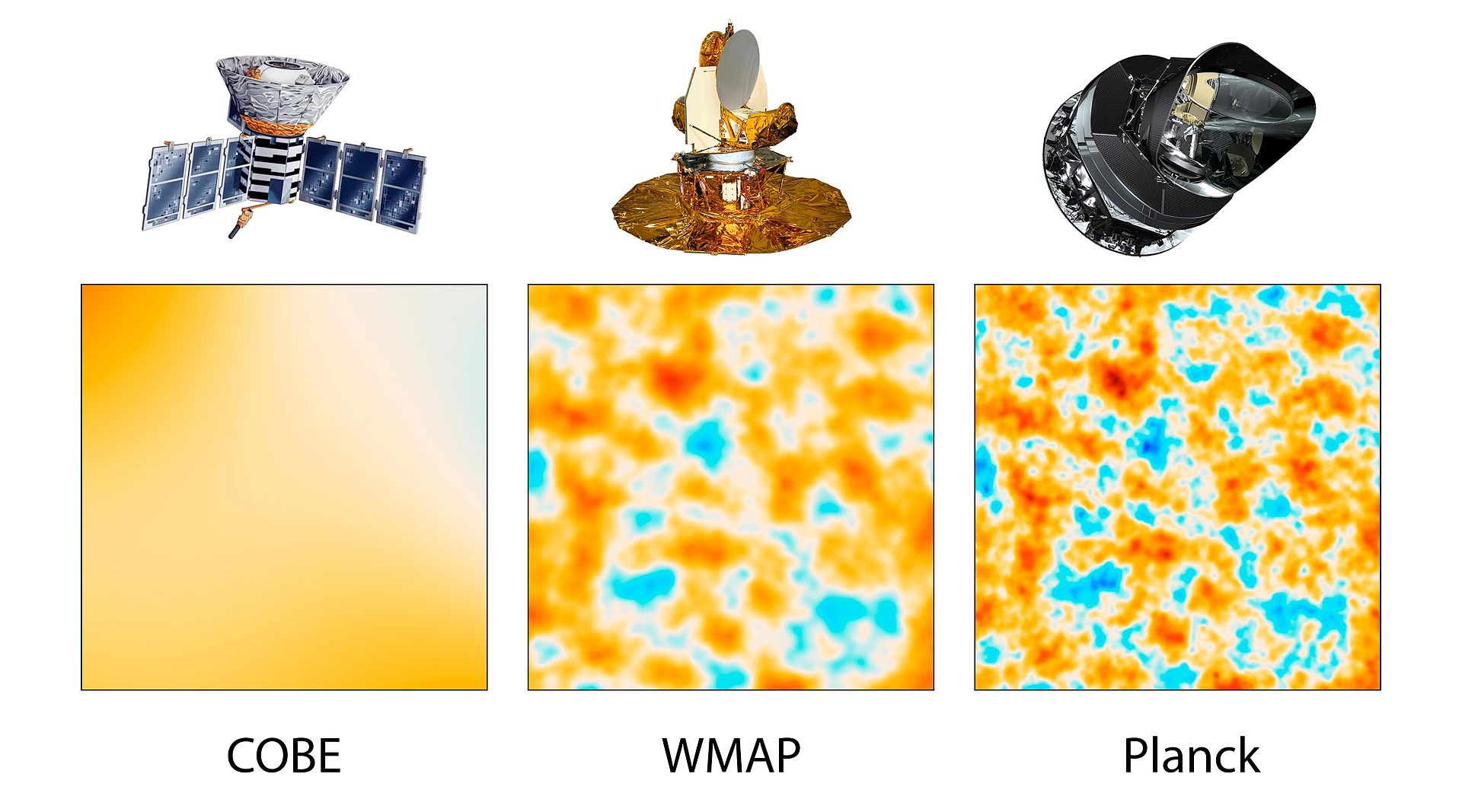 COBE, WMAP and Planck are all spacecraft that have measured the same cosmic microwave background (in increasing detail) from outside the Earth's atmosphere. The same background is found, with similar anisotropies, from different spacecraft using different telescopes, detectors and analysis techniques to remove non-cosmological sources.

Not the answer you're looking for? Browse other questions tagged radio-astronomy .

2
Is there available space images taken by the south pole Gregorian telescope?

15
Has radio astronomy ever been done on objects that appear very close to the Moon? Is this avoided?