What is the radiant intensity of the celestial sphere?

Specifically, excluding the Sun and the Moon:
How much energy, as light and other frequencies reaches a point in space on the average, if you add up all the sources like distant stars, the Milky Way, distant galaxies, nebulae etc.? How much brighter is the space than "perfect blackness" on the average?

Say, we've developed a magical solar battery that has 100% efficiency, can absorb all electromagnetic frequencies, is spherical, fully omnidirectional and has $1 m^2$ of cross-section surface (56cm radius); we sent it out halfway to Proxima Centauri and we measure how much power it produces - how many watts we'd get out of the battery utilizing all the starlight available?

Note: If "all frequencies" is not easily obtainable, the luminous counterpart to radiant values will be okay (only taking visible spectrum into account).

luminosity radiation
Share
Improve this question
edited May 15, 2019 at 18:22 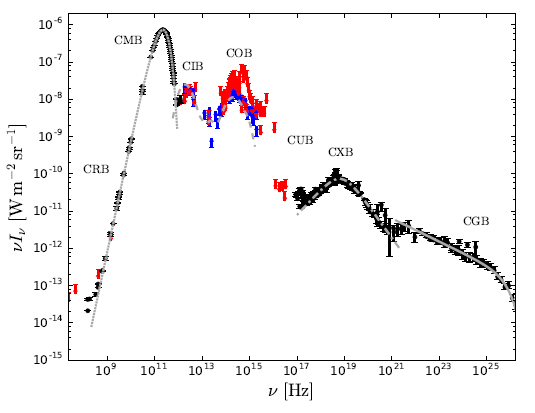 Note that you can't harness this unless you have a receiver that is colder than the CMB.

You can do a rough calculation for the contribution of optical background light by noting that the dark sky at a good, dark astronomical site is around 22 mag per square arcsecond in the V band. Only about 0.1-0.2 mag of this could be attributed to light pollution at the best astronomical sites (see for example Benn & Ellison 2007). Noting that the zero point for the V-band magnitude scale is $3.6 \times 10^{-12}$ Wm$^{-2}$ per angstrom for $V=0$ and taking the optical band as 3000 angstroms, and noting there are $5.34\times 10^{11}$ square arcseconds in the sky, then a point in space will receive $10^{-5}$ Wm$^{-2}$ (or perhaps about half this, because a significant fraction of the dark sky brightness is caused by airglow).

This roughly agrees with what is shown in the plot. Contributions at mid-infrared and at shorter wavelengths than optical do not contribute appreciably.

It might be thought that discrete sources or the Milky Way might contribute more, but I think that isn't the case. The Milky Way surface brightness is only about a factor of three above the dark sky brightness, but of course occupies a tiny fraction of the total sky.

A way to see that discrete stars don't contribute much is to note that the optical flux from the entire dark sky is equivalent to about 1000 zeroth magnitude stars or $10^7$ stars at 10th magnitude. Both numbers are higher by orders of magnitude than the actual numbers of Galactic stars at these brightnesses.

Not the answer you're looking for? Browse other questions tagged luminosity radiation .

7
What happens to the energy from a GRB?
1
What is the illuminance of Tau Ceti?
3
Difference between luminosity, luminous flux, and radiant flux?
4
What does Eddington Limit (Eddington Luminosity) Show?
3
Scattered Intensity of Light vs Angles of Incidence and Emission
3
Distinction between signal from terrestrial and signals from celestial sources
1
Conservation of specific intensity