How do we calculate heat flow or cooling rate for no fusion brown dwarf star?

I was reading this article and it said something that didn't sit right with me.

"SIMP0136 still gives off light mostly in the infrared wavelengths, as its temperature is now approximately 830° C (1,526° F)," Gagné told us. "It will take it approximately 10 billion years more before it reaches 0° C"

SIMP0136 was classified as a brown dwarf star but when they just recently figured out its mass to be only 12.7 times that of Jupiter they downgraded it to a gas giant planet. The threshold to qualify as a brown dwarf is 13 Jupiter masses.

Like gas giant planets, brown dwarf stars do not gave enough mass for fusion to occur so the term star is a bit misleading. Since there is no fusion, then it should eventually cool down. The 10 billion year cool down time to go from its present 830 deg C to 0 deg C seems way too long. How do they calculate this?

Whether or not the object is just above or below the threshold (about 13 Jupiter masses) at which the core will become hot enough to burn deuterium is not really relevant to the calculation you wish to understand. The object has cooled beyond the point at which D burning has ceased. It has also pretty much contracted to a minimum sized configuration where electron degeneracy pressure supports it. Therefore very little gravitational potential energy can contribute to subsequent thermal evolution.

All that is left is to calculate the thermal energy content (roughly $3kT/2 \times N_i$ - the number of hydrogen and helium ions, where $T$ is the internal temperature; the degenerate electrons contribute very little to the heat capacity) and then divide this by the luminosity radiated from the surface. The calculation is a little more complex than that because the luminosity fades as the brown dwarf cools.

Just for kicks - here is a back of the envelope calculation. The central temperature of a contracting ball of gas is given by the virial theorem. The brown dwarf you are talking about will contract until D burning (nearly) starts at about $10^{6}$ K - let's assume that is an upper limit to the current core temperature. The average temperature in the interior will be a bit lower than that (let's divide by 2), so $\langle T \rangle \sim 5\times 10^{5}$ K.

I am not surprised that this is somewhat lower than your estimate because the cooling time gets much longer as the object cools. This is clearly seen when looking at a proper model calculation; for example see the picture below taken from Burrows et al. (1997).

The lines show the cooling tracks of surface temperature versus (log) time. The red curves are "planets", the green are "brown dwarfs" - the dividing line is the D-burning threshold - seen as a plateau in the the green brown dwarf curves at early times. Your object is around this threshold. I have marked two points on the plot - the first corresponding to a 13 Jupiter mass object with a surface temperature of 1100K (you can see it must already be at least a hundred million years old) , the second marks the same object when it has cooled to about 273 K (zero Celsius). It does indeed occur after about 10 billion years. 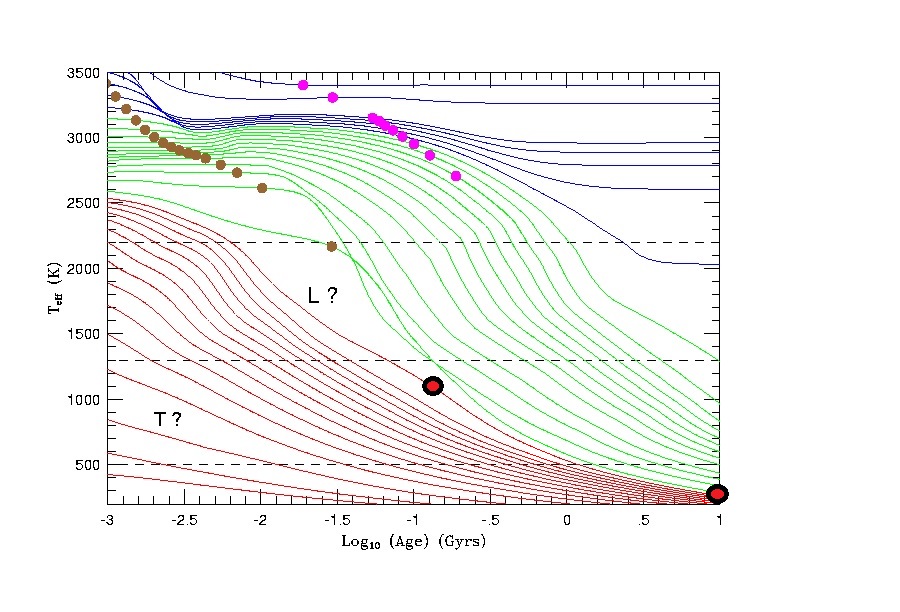 Brown dwarves usually exhibit deuterium burning in their core, which is where this omnious limit of 13 Jupiter masses comes from. It is the limit at which the core is dense and hot enough (as others have pointed out) enough to make deuterium nuclei fuse together. Deuterium has a relative abundance compared with Hydrogen of $10^{-4}$, but is easier to fuse than regular hydrogen. This is why brown dwarves can exist, after all.

The energy flux they generate in the core is slowly diffused outwards until it reaches the shell from which it can escape. The virial theorem then tells us, that exactly half of their luminosity we see on the surface is retained in the dwarf. Thus, is we know an energy content $E$ and we know the energy loss rate $\dot E$ (which is the luminosity) astronomers usually go ahead to construct an estimate of the e-folding cooling & contraction time as $t_{\text{cool}} = E/\dot E$.

The surface temperature of a brown dwarf (or a star, for that matter) is considerably less than the core temperature. As scholarpedia writes,

There's a lot more energy in the body than if the entire dwarf were at 1100 K. Even after downgrading to planet status, the core temperature is maybe a decade greater than the surface temperature.

Not the answer you're looking for? Browse other questions tagged astrophysics star-formation gas-giants brown-dwarf thermodynamics .

7
Mechanism for Brown Dwarf Fusion
4
Brown dwarfs and planets
3
"Turn on point" for fusion?
13
Fate of Jupiter when our sun dies
10
Existence of planets larger than their host star?
0
Would it be possible for life found on moon of rogue planet
1
Life cycle of a gas planet?
2
Would dropping a white dwarf or a "still-hot" stellar core into a large planet or brown dwarf create a star?