Size and Mass of a typical “small” asteroid that impacts the Earth?

I'm looking for some realistic data about the size (in meters) and mass (in kg) of a typical small asteroids that impact the Earth, without disintegrating in the atmosphere.

For the asteroid not to break up it needs to either be big, or tough. You can experiment with the impact effects calculator but you should notice that a rocky asteroid with a diameter of less than about 1km will partially break up on impact with the atmosphere, and there may be multiple craters formed.

If the asteroid is less than about 100m in diameter than the breakup will be complete enough that the resulting meteorites will fall at terminal velocity, and won't form craters in rock.

Iron meteorites are tougher, but even these are likely to break up if they are less than 500m in diameter.

Needless to say, these are not small events, and we have never actually witnessed any object hitting the Earth that is large enough to make it through our atmosphere in one piece.

The direct answer to the question is that there are no typical small impacts of bodies that don't break up. The Barringer "meteor crator" impactor was an iron asteroid, with a diameter of about 40 or 50m, that broke up on impact with the atmosphere, and fell in a circle of about 150m in diameter, forming the 1km diameter crater we see now. The mass of the impactor was about 1 to 2 million tonnes. It hit the atmosphere at about 15 to 17 km/s but by the time it reached Earth, it had slowed to less than 12 km/s. It exploded with the energy of about 10 Megatonnes of TNT. The dispersal of the fragments was not enough to from several craters. See a barringer type impact Or read about the impact

It is best summed up by this graph of meteorite diameter versus frequency of impact, divided by the probability of atmosphere traversal.

Micrometeorites (particles normally less than 1 mm in size) constitute the main part of the flux of extraterrestrial matter accreting on Earth (1–3). (from arctic samples)

Over the whole surface area of Earth, there's 18,000 to 84,000 meteorites bigger than 10 grams per year. (study by P. A. Bland and was published in Monthly Notices of the Royal Astronomical Society.) 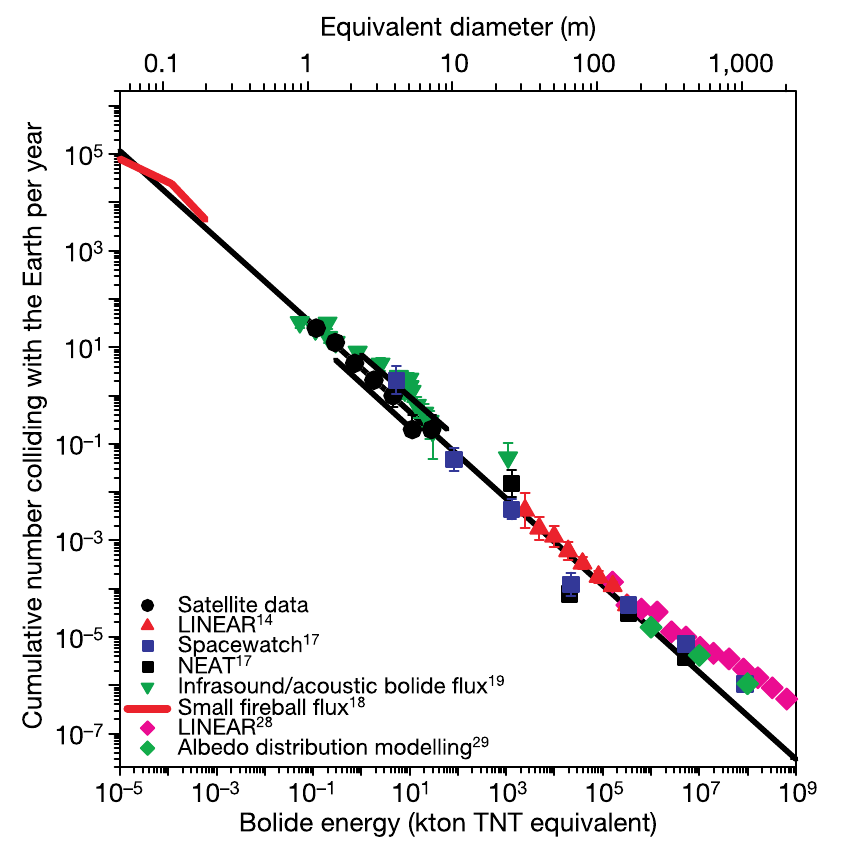 Not the answer you're looking for? Browse other questions tagged earth asteroids mass impact near-earth-object or ask your own question.

7
How can we tell if the asteroid 2013 TV135 will hit Earth in 2032?
2
Why doesn't Jupiter increase the chances of an asteroid to strike the Earth?
8
Does Jupiter help to protect the Earth against comets/asteroids impacts?
9
How is the total mass of all the Solar System's small asteroids and meteoroids estimated?
8
What percentage of a lunar meteor strike is blown back into space?
11
Could this estimate of the size and mass of the Chicxulub Impactor be accurate?
13
How loud was the asteroid that killed the dinosaurs?