How far could be an object from the Sun and still be under the influence of its gravitational field?

I'm trying to see how far can our star reaches with its gravity. I'm asking if anyone could give info as to what's our star's limit or the furthest object found in our solar system.

The Sun's gravity extends infinitely, but eventually solar objects would be unstable due to the influence of other stars. The minor planet "Sedna" has an orbit which takes it nearly 1000 AU (0.016 light years) from the sun at its furthest point (but now it is a lot closer)

It is also thought that billions of comets must orbit in the outer part of the solar system, out to 50000AU, or 0.8 light years, (or possibly further) forming the Oort Cloud. However, at such distances, they could not be directly observed. This marks the greatest distance at which orbiting solar system bodies can be found.

There's no straight forward answer. In the solar-system, which is well ordered, objects that are in stable orbits, and not too elliptical, have well defined spheres of influence. Planet 9, if/when it's discovered, will probably have the largest sphere of influence for known solar-system objects. Currently, Neptune has the largest.

If the stars near the sun were static relative to each other, the Sun's sphere of influence could be calculated and it would probably extend between 2 and 3 light years. But because the stars are not static, the sphere of influence is constantly changing and stars (probably) exchange outer, loosely orbiting debris fairly frequently.

The Oort cloud by this article is thought to extend to almost 2 light years, so that's one possible answer to your question. If you want to know the most distant aphelion of an object currently orbiting the sun, James Ks answer is good, but I think the outer most aphelion is a bit further than the 0.8 light years that he suggests. At least 2 light-years, possibly even 3. The problem is, an orbit that distant, such an object has a good chance of being deflected before it reaches it's perihelion, a journey that takes over 10 million years. Orbits that distant are likely not very stable. A lot depends on how close other stars get to our sun. A star that passes too close would likely throw everything in the vicinity that it passes through out of wack.

The tiny Scholz's star is thought to have passed within 1 light year of our sun about 70,000 years ago. Stars passing that close are quite rare, but, from the link above

A star is expected to pass through the Oort Cloud every 100,000 years or so. An approach as close or closer than 52,000 AU is expected to occur about every 9 million years.

This does make defining an outermost orbit somewhat difficult, as the most distant orbits take millions of years to reach their closest point from their most distant point, and they run a pretty good chance of being perturbed within a single orbit. Stars likely play Frisbee with their outer-most orbiting objects all the time. Picking an outermost stable orbit is impossible.

Since the effect on space-time curvature (gravity) of the Sun propagates through space at the speed of light, a observer beyond the Suns Cosmological horizon, or it's age in light years away, will never be able to feel it.

Take a simple case where we know the mass of two solar systems (M_1 and M_2) and the distance between their centers of gravity (x). We want to find the location between them where the two forces of gravity from each system cancel out. Where an object placed on one or the other side of that point would eventually fall into one or the other the star system.

To find the point of equilibrium between 2 systems, first we need the formula for the force of gravity:

F = GmM/R^2 (this is Newtonian gravity, so it is ultimately wrong but a fair approximation anyhow).

F_1 is the force from the first system acting on the placed object:

We do the same thing for the second system:

And then we set the forces equal eachother to find the point where they will cancel out:

At this exact point an object is pulled equally by the forces from both systems and will stay motionless. We can see that several variables cancel out, the mass of the object (m) and the gravitational constant (G), and we are left with:

Since we know the distance between the systems (x) we can make a substitution using the formula: 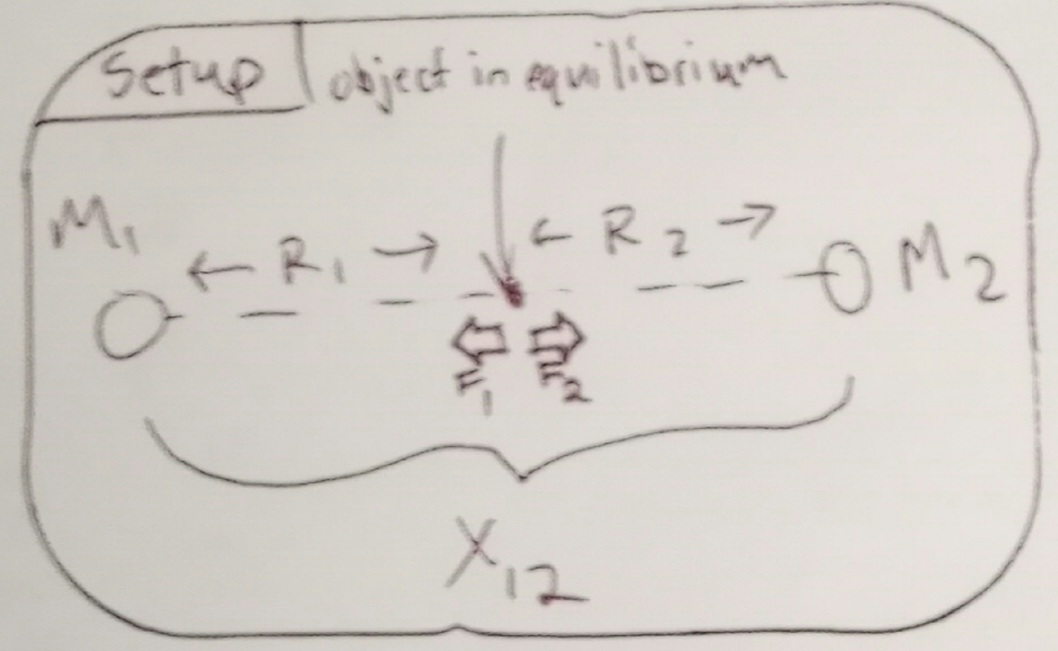 What we are left with (after some algebra) is the infamous quadratic equation solution, where:

Lastly, we need the quadratic equation: 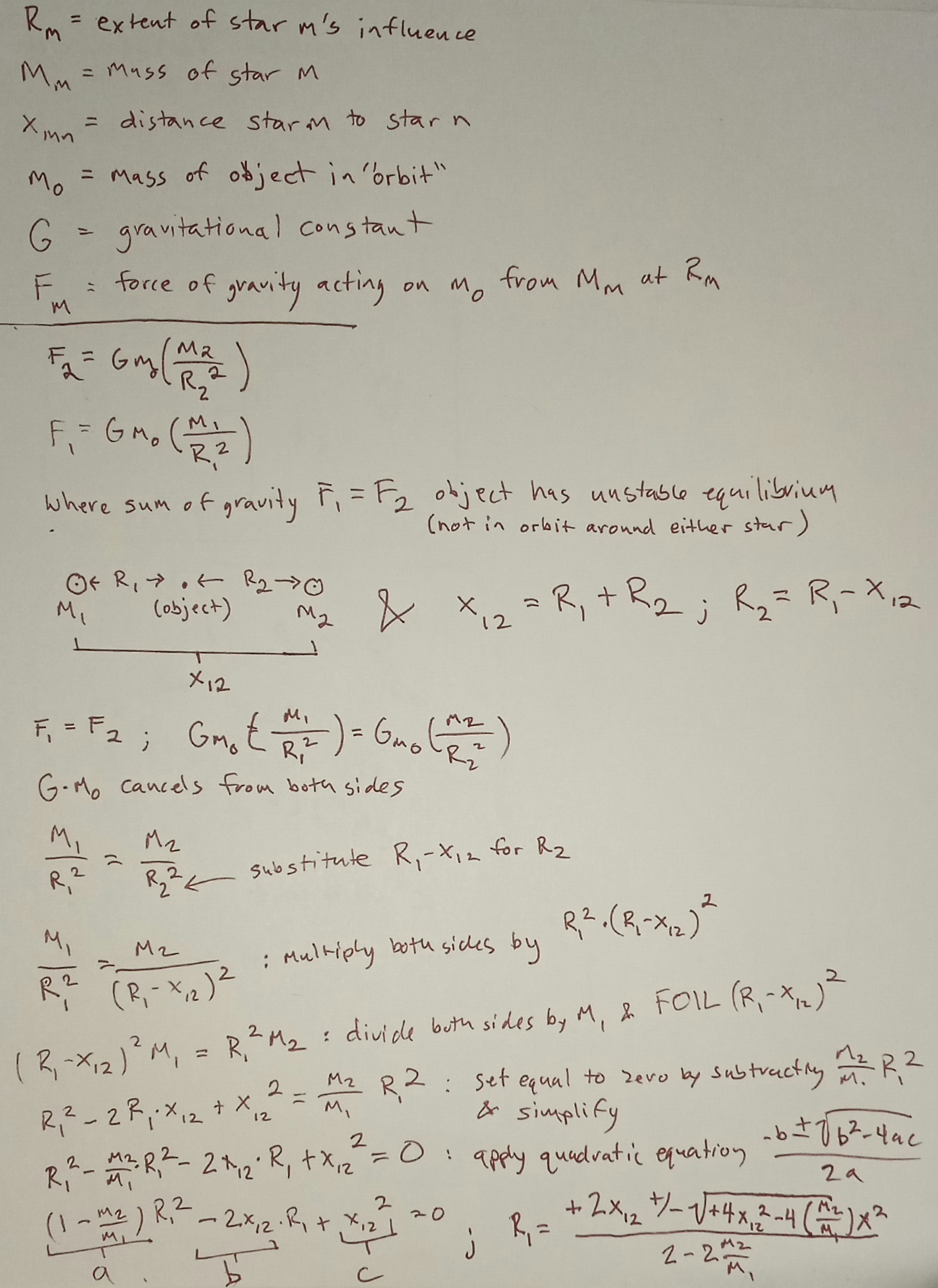 Skipping the algebra, simply plug your 3 knowns into a, b, and c and apply these to the quadratic solution.

You can then find R_1 using the formula:

The concept is similar to rain basins, these are space basins. In the case of a basin in space we merely create a point and draw a line perpendicular to an imaginary line connecting the 2 systems. In a more complex set of multiple systems we find the equilibrium points between all neighboring systems and extend the perpendicular basin lines to where they first touch one another. 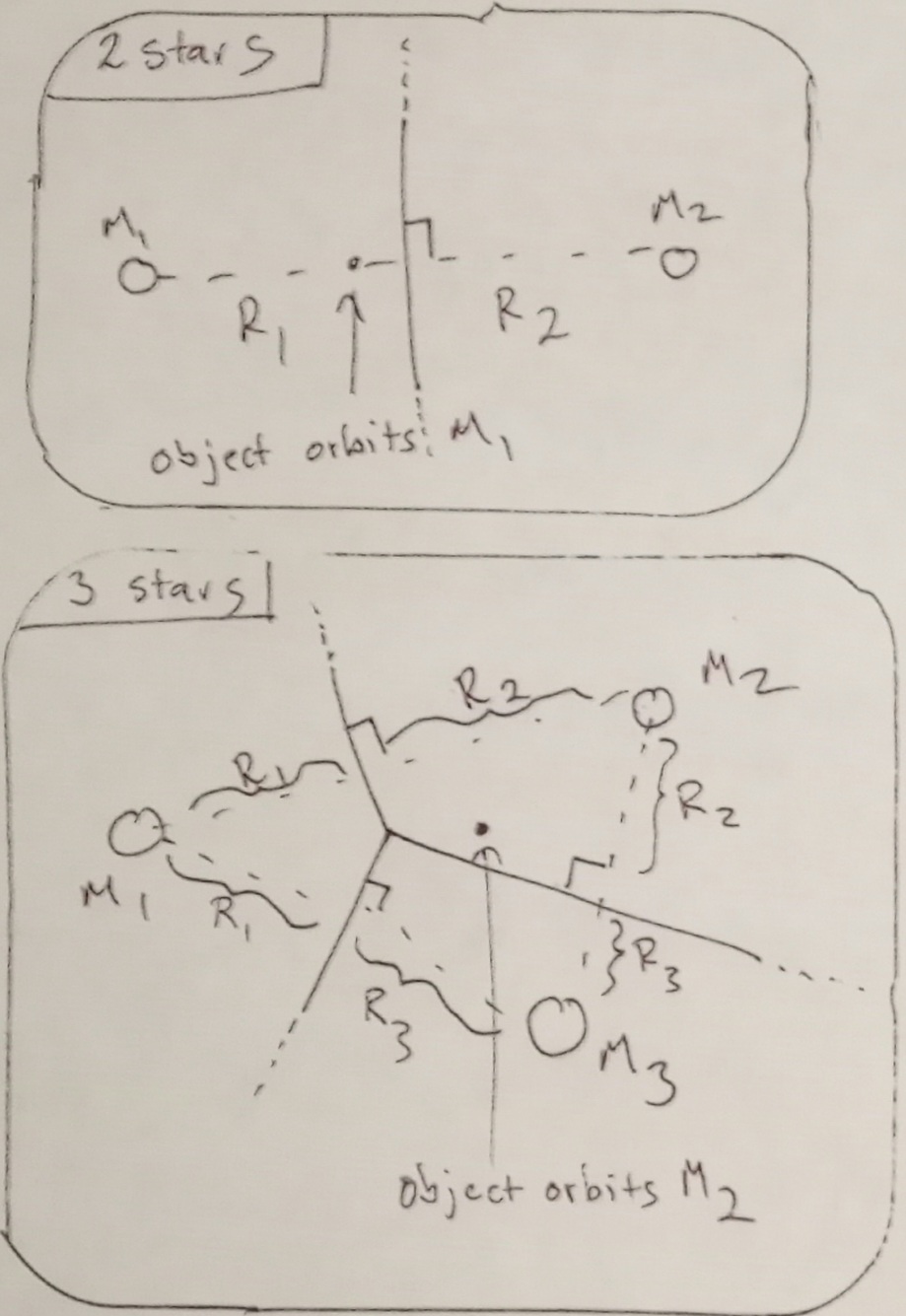 20
Hypothetical trans-Neptunian planets orbiting the Sun
3
Position and velocity vectors of nearby stars?
9
Could the trajectories of non-periodic comets be used to infer properties of the 'ninth planet'?
8
Was there ever a hypothesis about a planet called Biga?
3
Could Planet Nine be a tiny black hole or an exotic compact object such that it escaped detection? What would its bounds be?
2
Can Earth be ejected out of the solar system this way?
9
How much more life could the Sun acquire via star lifting?
8
Could rocks from Earth have reached the Kuiper belt, or Neptune at least? If so, how?