When exactly does a sub giant become a red giant?

A simple, but interesting question I think. I understand that after the hydrogen exhaustion on the main sequence the post main sequence starts with the SGB where they burn hydrogen in a shell around the Helium core. We also know that stars under $ 2 M_{\odot }$ experience a Helium flash and start Helium core fusion after the Red giant tip. Whereas stars greater than $2 M_{\odot }$ do not experience this Helium flash and starting the He-core burning immediately after the SGB without a helium flash (very massive stars burn Helium on the main sequence).

My question is now what specific physical process happens in a sub giant, which makes it a red giant afterwards?

Thank you in advance (I am very open for mathematical/physics explanations as well, since I study physics myself).

The straightforward definition is in terms of where a star lies on its evolutionary track in the HR diagram (see below). The subgiant branch stars are those which have exhausted their hydrogen core and which are burning hydrogen in a shell but their He cores have not begun to contract significantly. The distinct upturn in luminosity marks the beginning of the red giant branch. This occurs when the core grows significantly more massive, cannot support itself hydrostatically and begins to contract. At the same time the envelope expands and becomes convective and the H-burning shell moves inwards and increases in temperature and luminosity.

The tip of the red giant branch is where He is ignited. This takes place "explosively" in a degenerate core if the star is below about $2M_{\odot}$ (not $5M_{\odot}$), but begins smoothly in higher mass stars. This causes the core to expand, pushes the H-burning shell out and reduces the luminosity. 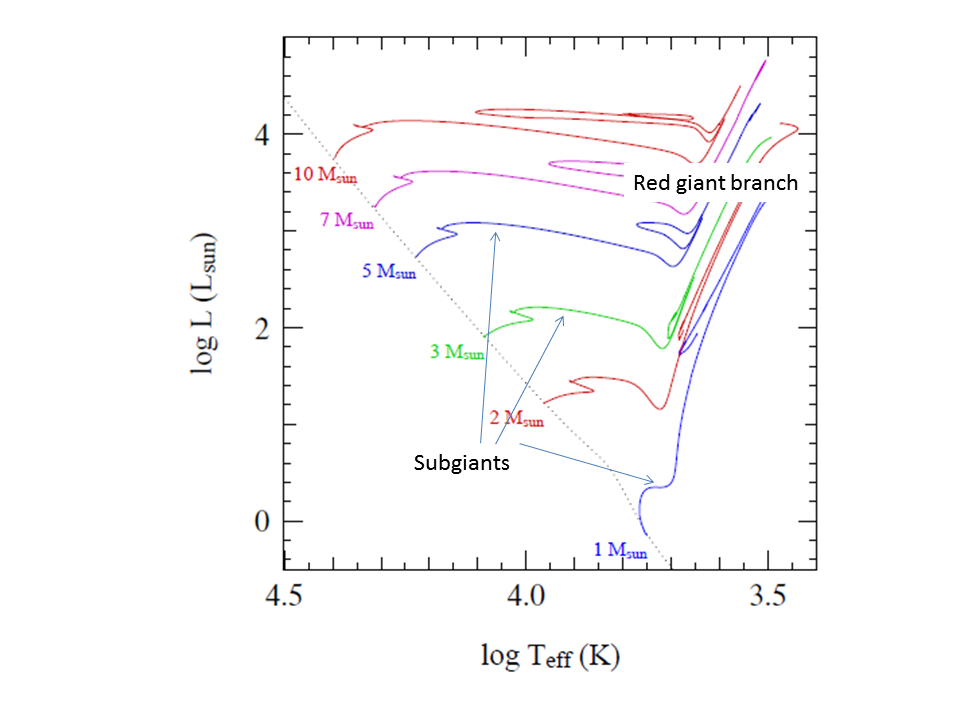 Let's walk through the stages of post-main sequence evolution. For reference, the images, and much of the content is being pulled from An Introduction to Modern Astrophysics by Carroll and Ostlie. I'll break this into low mass stars ($\sim1\:\mathrm{M_\odot}$) and intermediate mass stars (($\sim5\:\mathrm{M_\odot}$) 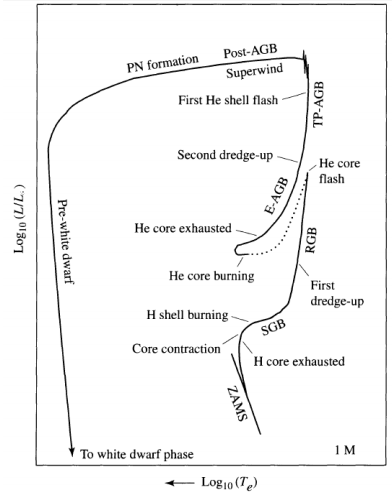 Above is an H-R Diagram representing the path of a low mass star through the luminosity-temperature phase space. The star leaves the Zero-Age Main Sequence (ZAMS) once the core of the star has run out of hydrogen and fusion of hydrogen into helium ceases. As you stated, you begin to have a slight core contraction and then hydrogen in a shell around the core begins to burn, producing a helium shell. This hydrogen shell burning causes the core to continue to grow in size and at some point, you reach the Schonberg-Chandrasekhar limit, essentially the mass limit for the core which is capable of supporting the gravitational pressure of itself and the envelope. Once the core becomes too massive, it rapidly contracts, releasing a lot of gravitational potential energy which is dumped into the envelope, causing it to heat up. At this point, the star is at the end of the Sub-Giant Branch (SGB) portion of the path and just about to enter the Red Giant Branch (RGB).

With a collapsing core (and continued burning of the hydrogen shell) producing huge amounts of energy and an envelope which is heating up, the star needs to reach an equillibrium. This is achieved by the envelope expanding drastically. This, I would argue, is when the star becomes a red giant. After the core contraction energy has been dumped into the envelope and the envelope has expanded due to being heated up. A lot more stuff happens after this point, including a dredge-up from the core and the helium flash, but that is outside the scope of your question. 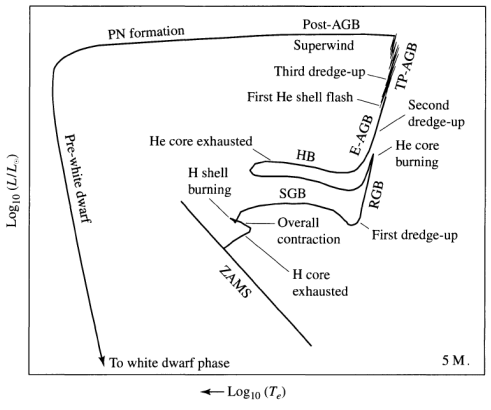 This is the H-R Diagram representing the path of an intermediate mass star as it leaves the ZAMS. Most of the description I provided above is applicable here, in that the intermediate mass star follows the same process. There are only a few differences in the details. The major difference you may pick out is that as the star moves along the SGB, it actually decreases in luminosity towards the end before venturing up the RGB. This is simply due to the fact that after the core contracts and releases energy into the envelope, the envelope is so much larger than the low mass case, that it can absorb a lot more energy before needing to re-equillibrate. For a time, the core contracts, dumping energy into the envelope, and the overall star luminosity decreases because the core's energy has not found its way out of the star yet, but the star is now smaller. Once the envelope reaches its peak energy consumption it then expands, just as in the low mass state $-$ it simply takes more time and energy to reach this point.

I don't know if this answer your question, but both stars suffer the same process, what happens to the subgiants is that the free electrons cloud stops a bit the procces, but in the massive stars this cloud hasn't been altered.

Degenerated electron cloud: non-interacting particles with pressure and other physical characteristics determined by quantum mechanical effects. It is the analogue of an ideal gas in classical mechanics. The degenerate state of matter, insofar as it deviates from an ideal gas, arises at extraordinarily high density (in compact stars) or at extremely low temperatures in laboratories. It occurs for matter particles such as electrons, neutrons, protons, and fermions in general and in which case it is referred to as electron-degenerate matter, neutron-degenerate matter, and so on. In a mixture of particles, such as ions and electrons in white dwarfs or metals, the electrons may be degenerate, while the ions are not.

Not the answer you're looking for? Browse other questions tagged star red-giant hr-diagram or ask your own question.

18
Why do stars become red giants?
4
Why do post main sequence stars enter the red giants branch?
11
Why is the track of the subgiant stage almost horizontal on the HR diagram?
17
When a star reaches the red giant phase, why does it become more opaque?
3
How long does it take a star to transition from main sequence to red giant?
2
How does the stellar evolution for low and intermediate mass stars differ?
1
Clear boundary between core and shell of a gas star
1
Fusing and buring of Helium core/shell