How big is the universe. How does it works?

I watch this movie:

I can't understand where is there triangle with 180 degrees.

What exactly is this red spot on the cosmic microwave background?

Is it a base of triangle? How does it appear that this spot is smooth surface but not a concavity?

There are features in the CMB, the distance and size of which can be derived from cosmological models (6-parameter Lambda CDM model). The expected size of the features can be predicted in terms of angles in the sky, depending on how curved large-scale space-time is. (The features are a statistical property of tiny temperature fluctuations in the CMB indicating the largest scale of causal connection - kind of sound waves - in the baryon-photon plasma before recombination 380,000 years after the Big Bang, called first acoustic peak of the CMB power spectrum. The angle should be about 1 degree for a flat space-time, in accordance with observation.) Things aren't quite straightforward, e.g. due to the way the universe has been expanding, therefore it's done with simulations.

The curvature of space-time follows the same principles as curvature of 2-dimensional surfaces. A triangle in an Euclidean plane has an angle sum of 180 degrees, while a triangle on a sphere has an angle sum of more than 180 degrees. Hence an object of a fixed size and a fixed distance looks larger (takes a larger angle) on a sphere than on a plane.

Here a sketch of a triangle on a sphere (may be interpreted as an observer looking to an object) and a triangle of the same size - meaning the same lengths of the sides in this case - in a plane: 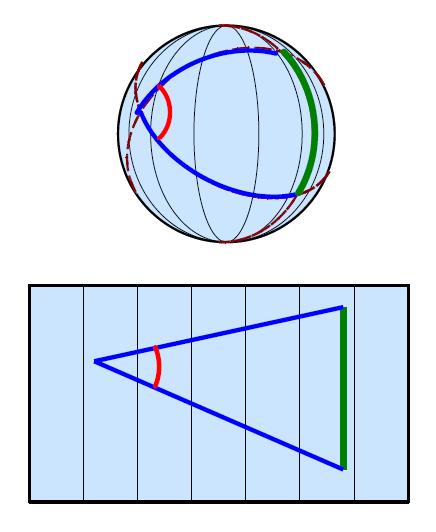 According to the current (Lambda-CDM) model of the universe together with the best-fit parameters, the universe is flat within the limits of measurement. Hence it's plausible (by extrapolation), but not necessary, that the universe is either huge or even infinite.

11
How does light affect the universe?
6
Our universe the surface of a 4-dimensional sphere?
6
Does the universe have an edge?
4
How can the observable universe shrink in a Big Rip?
4
How can cosmological bubble universes “collide” with each other?
8
Based off of the study that found the universe has a positive curvature, how big would the whole universe be?