What physical features determine if a planet is a major, minor or dwarf planet?

Like many, when I was growing up, we always were taught, hence always learned that there were 9 planets. However, recently, decisions were made and all of a sudden there were 8 major planets and a series of dwarf and minor planets.

What physical features delineate a body being referred to as a major planet as opposed to dwarf planet or minor planet?

For a body to be classified as a planet it must have a few physical characteristics:

It must have enough mass to have a strong enough gravity to overcome electrostatic forces to bring it to a state of hydrostatic equilibrium.

Hydrostatic equilibrium is important because early in a planets life it is nearly entirely fluid, crust and all

The life cycle of a planet essentially leads to denser heavier metals being at the centre of a planet, surrounded by a mantle which must at some point have been fluid (it can still be solid and called a planet as long as it used to be fluid.)

This is usually driven by its mass but a planet should have an atmosphere. This means it should be massive enough to have a strong enough gravity to hold some gasses to its surface.

More massive planets are capable of keeping lighter gasses, such as hydrogen, bound to them too. I.e Jupiter.

A magnetosphere suggests that the body is still geologically active. This means they have flows of elements that conduct electricity in their interiors.

As specified by the IAU:

Minor planets are things such as asteroids, they are usually small mass, rocky bodies. This is different from small mass bodies that might be predominantly ice or water.

The IAU have not specified an upper or lower limit for mass to be considered a Dwarf Planet, therefore it is predominantly determined by one other feature called:

Orbital dominance is achieved when a body has cleared it's orbit of all other bodies.

For example planets are able to remove small bodies out of their area through impact, capture, or gravitational disturbance. 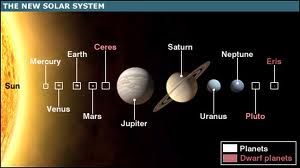 In 2006 the Internaional Astronomical Union (IAU) (that's a download link, 85KB) came to the resolution that a planet is:

a celestial body that (a) is in orbit around the Sun, (b) has sufficient mass for its self-gravity to overcome rigid body forces so that it assumes a hydrostatic equilibrium (nearly round) shape, and (c) has cleared the neighbourhood around its orbit.

A Dwarf Planet is:

a celestial body that (a) is in orbit around the Sun, (b) has sufficient mass for its self-gravity to overcome rigid body forces so that it assumes a hydrostatic equilibrium (nearly round) shape1, (c) has not cleared the neighbourhood around its orbit, and (d) is not a satellite.

The same resolution also said that anything else, except satellites, is classified as a "Small Solar-System Body".

-1
Reason for disqualifying Pluto as a Planet?
1
What are the requirements to become a planet?
4
Could the earth become a star if more mass was added?

15
Is Pluto still a dwarf planet?
9
Is Jupiter a dwarf planet?
5
"Official" time for other planets
1
How do they know how far out Farout is? (2018 VG18)
3
Trans-Neptunian Dwarf Planet near Heliopause
4
Could Planet Nine be much smaller than thought previously?
2
What would be the year length of a habitable planet of 40 Eridani A?
6
If Jupiter and Saturn were considered stars, which of their moons would qualify as planets by 'clearing the neighbourhood'?
2
Did we find any exo–dwarf-planet?