I had this question on a test and got it wrong but I can't understand the explanation. 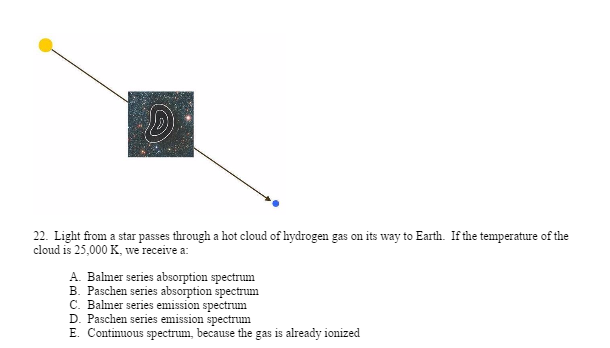 I don't get why we receive a Paschen series absorption. Could anyone explain?

The Paschen series absorption requires a population of H atoms in the $n=3$ level and a radiation field containing infrared photons $\leq 1875$ nm, that can boost them in to the $=4,5,6...$ levels.

If hydrogen gas is at 25,000K, you can use the Saha equation to work out the fractional ionisation. This depends on both the temperature and density of the gas. For the temperature you have been given, the ratio of ionised to netutral hydrogen is $1.7\times 10^{25}/n_e$, where $n_e$ is the electron number density in m$^{-3}$,

The typical particle number densities of an interstellar gas cloud are much, much less (many orders of magnitude) than $10^{25}$ m$^{-3}$, so the gas is totally ionised.

If that is the case then there can be no Paschen absorption and no Balmer absorption due to the cloud since there are no atoms in the $n=2,3$ states. There may be small amounts of Paschen and Balmer emission from the cloud via recombination.

Thus what you basically see is the spectrum of the star and since you aren't told what kind of star it is, then it's impossible to rule out the presence of emission lines or absorption lines of any kind. It is thus a dreadful and unanswerable question.

7
Why do some artificial satellites decrease and increase in brightness multiple times?
4
Why do spectroscopic binaries have approximate circular orbits?
3
How to find period of a pulsar from a given time sampled voltage data?
1
What is a “semester series” for eclipse prediction? - Solar saros series 147 and 152
1
Solar series 142 and 147 started same year - series 147 and 152 will be ending same year. Why? Coincidence?
3
Why does moon's highest altitude change during the year
4
Expected nature of LISA's data; will it be more like a forest of static peaks, or a series of individual events?
3
What is a “21cm/mm absorption system” in the context of measuring old photons from quasars?