Can someone explain this diagram?

The puzzling bit in this diagram is the sudden dip from a local maximum F (why is there a maximum) to G (why is G a local minimum). The drop from K to M is explained above - that being that M class stars are just very dim (is this all there is to say here?).

It's all to do with the relationships between mass, spectral-type and luminosity and the initial mass function of stars.

I think your explanation of points 1 and 2 are completely correct. O and B stars are rarely born and short-lived; so even though they have enormous luminosities relatively few make it into a list of stars ordered by apparent brightness. A further important reason is that although they are immensely luminous, the more distant examples that might have made it into the list, cannot make it into the list because they are in the Galactic plane (they are young and still close to where they were born) and thus severely affected by extinction.

M-dwarfs are indeed the most common type of star, but not common enough to overcome the fact that their luminosities are much, much lower than hotter stars.

The dip in G stars is actually a peak in the K-stars caused by giants. Most low(ish) mass stars will evolve towards more or less the same point in the HR diagram forming the red clump. These stars are luminous, older and not concentrated in the galactic plane, can therefore be seen to great distances and produce a peak in the number counts.

So you can see this using actual data rather than a cartoon, I producedthe HR diagram for the brightest 10,000 stars in the revised Hipparcos catalogue (about V<6.7). You can clearly see the red clump of giants. Now collapse this distribution onto the B-V axis and you can see there is a local minimum at $0.6<B-V<0.8$ corresponding to G-stars. 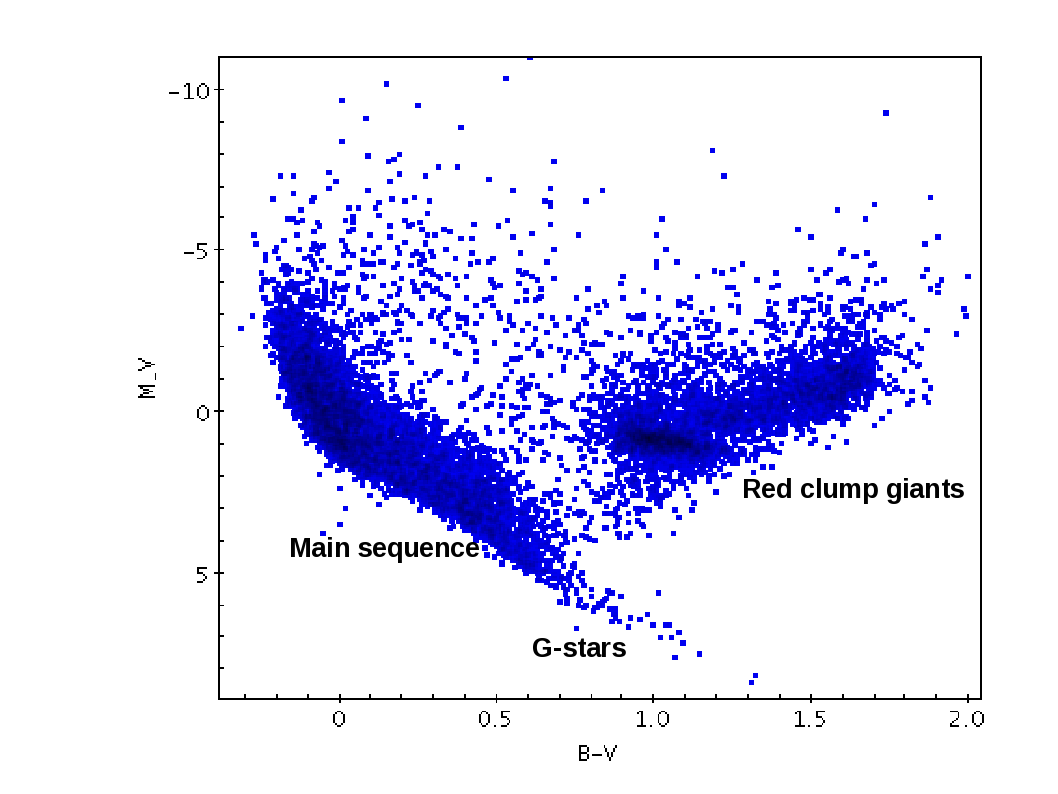 The corresponding B-V distribution for these stars. G-stars have $0.6<B-V<0.8$ 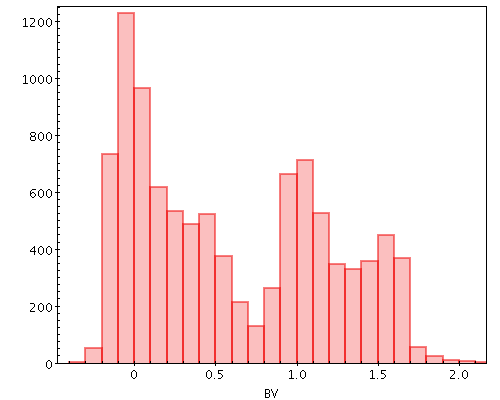 I'd say there are fewer M stars on list because they are least bright. they may outnumber other star types but only nearest ones would make list of brightest stars. Type O stars are rare hence the small number. This info is available from a Wikipedia page on 'stellar classifications' and refer mostly to the mail sequence stars on the Hertzsprung–Russell diagram. The upper peak around type K (your point 3) is maybe explained by the addition of Red Giants and Bright Giants, but this is just a guess really from the HR diagram.

Not the answer you're looking for? Browse other questions tagged stellar-evolution spectral-type .

6
Can Jupiter's nightside be classified as spectral type Y?
3
Are there ways to determine a star's spectral type without the spectrum itself?
1
How can red supergiants be cooler than dwarfs of the same spectral type?
3
What does the "a" at the end of a spectral type mean?
5
Does "spectral type" and "stellar classification" refer to the same thing?
5
How would the characteristics of a habitable planet change with stars of different spectral types?
5
Is a branch on HR diagram a line formed by stars in the same evolutionary phase, or the evolutionary track of an individual star?