Can someone explain me this diagram from an article? 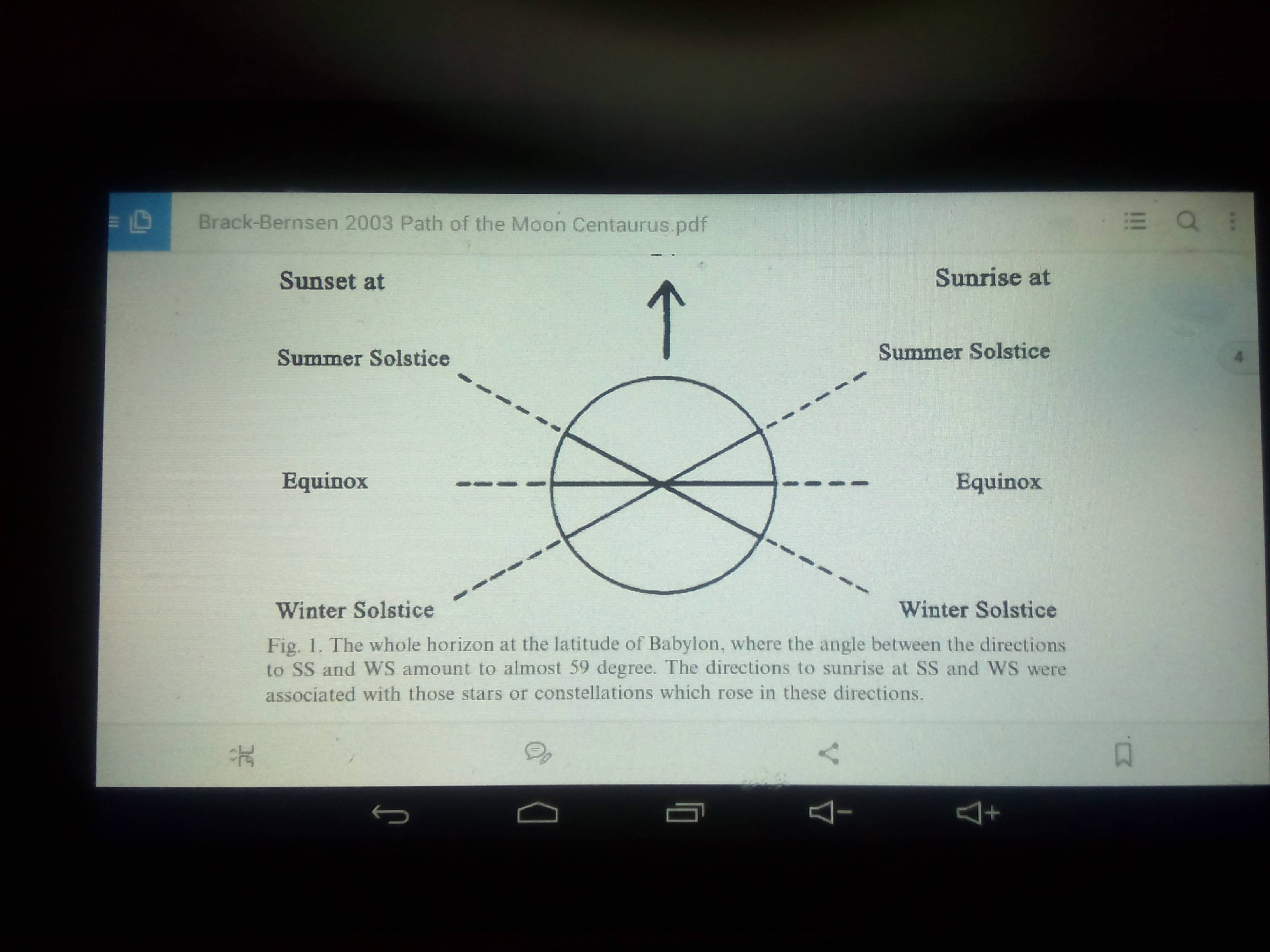 How should I understand this 59 degree mentioned below, what does it mean? I could not get it. The photo is a diagram from an article dedicated to the invention of the ecliptic. The photo is from my tablet (the title could be seen)

This is almost too short to be answer. Using the "rise" formula at Need Simple equation for Rise, Transit, and Set time and plugging in 32.54 degrees for Babylon's latitude, we get:

To be fair, even after applying some corrections, I couldn't quite get 59 degrees or even anything about 58.5 degrees, but I'm sure this is what they're talking about.

TODO: I invite someone to create a graph showing how the "59 degrees" varies with latitude.

The Earth's equator is at an approximate 23.4 degree angle to the plain of its orbit around the Sun. That means that to an Earth-bound observer the Sun appears to move north and south of the celestial equator (which is merely the projection of the Earth's equator on to the sky) during the course of the year.

In fact this is what gives us the seasons - so in the the Sun is at maximum northern declination (the equivalent of latitude when projected on to the sky) at the time of the Summer Solstice (around 21 June - hence summer in the northern hemisphere) and at maximum southern declination at the time of the winter solstice (around 21 December - hence northern winter).

But this movement also means different rising and setting points - in the Northern hemisphere the Sun's rise is between north and ast in the summer and between south and east in the winter (unless, that is, you are within the Artic circle in which case it will not set/rise at all for at least some period in the summer and winter).

Not the answer you're looking for? Browse other questions tagged orbit observational-astronomy or ask your own question.

12
Why is twilight longer in summer than winter and shortest at the equinox
6
Need Simple equation for Rise, Transit, and Set time

19
Is there any point on earth where the moon stays below the horizon for an extended period of time?
3
Supermoon Lunar Eclipse?
9
How can one explain the apparent motion of the Sun from a heliocentric point of view?
4
What (actually) is Jupiter doing to this year's Perseids meteor shower?
9
Period coincidence of Planet Nine with furthest Kuiper belt objects
6
Jupiter-Venus conjunction is vertically aligned. I'm at 49° N. How is this possible?
11
Are astronomers waiting to see something in an image from a gravitational lens that they've already seen in an adjacent image?
5
Draw the celestial sphere for latitude, showing the star Sirius, Estimate the approximate date when Sirius rises with the Sun
1
What is the LSST now? Where does LSST end and Vera C. Rubin Observatory begin?