Can someone explain my why "white dwarfs" and "red giants" were so named? And maybe that's a silly question but why not in the opposite way?

@EDIT Is this somehow co-related with Stefan–Boltzmann law?

A typical white dwarf is very hot, with $ T > 10^5 K $ even. Here let's assume it is about 50,000 K. A typical red giant is of lower temperature than the sun. Let's take it to be about 4,500 K (it will usually be a bit lower). Then we can plot the Spectral Irradiance of both the sources and compare them (I had an older Matlab code). 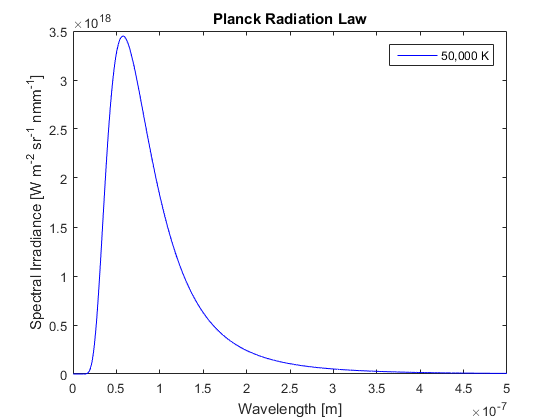 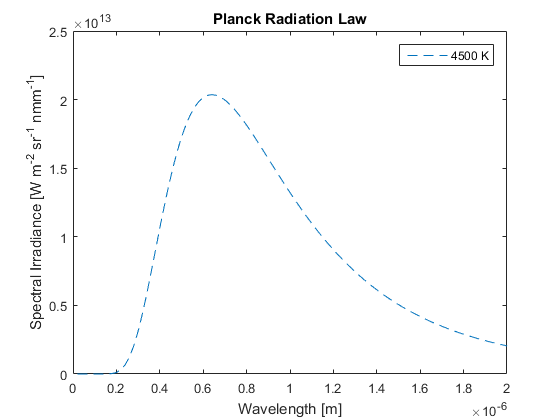 For the white dwarf we see that the peak occurs at a significantly lower wavelength than visible light (at about 0.58 nm). Most white dwarfs are hotter so the peak would shift further to the left. Thus, we expect the white dwarf to appear white with a bluish tinge as blue is still marginally higher than the other wavelengths.

For the red giant, the peak occurs at about 640 nm, which is near the red end of the spectrum. Red giants colder than this would have peaks shifted to the right. So they appear orange-red.

As @AtmosphericPrisonEscape already mentioned, dwarf and giant relate to the physical size as compared to the original star in the main sequence.

The use of giant and dwarf in reference to stars of the highest and lowest luminosity is attested by 1914, said to have been suggested by Danish astronomer Ejnar Hertzsprung, (1873-1967); hence red dwarf (attested by 1922) etc. (http://www.etymonline.com/index.php?allowed_in_frame=0&search=dwarf)

The terms "giant" and "dwarf" refer to the position on the Herzprung-Russel diagram.It is apparent that there are some stars that are much brighter (and, we deduce, larger) then the temperature of their surface would suggest (these are the giant stars) There are others that are much dimmer dispite being very hot - white dwarfs. More recently, all non-giant stars have become classified as dwarfs.

Not the answer you're looking for? Browse other questions tagged star white-dwarf red-giant .

18
Why do stars become red giants?
7
Accurate way to programmatically generate a main sequence star?
3
Gaia Gbp - Grp: why does it get larger as star gets redder?
1
Do white dwarfs lose mass as they fade to black dwarfs? Is there a correlation between temperature, mass, and radius?
8
The colour of blue dwarf stars
6
What is considered "contact" for contact binary white dwarfs, and roughly how long can they stay that way before merging?
10
If Sunlike stars become a red giant and eventually a white dwarf, what do red dwarfs become?
0
Is something wrong with my luminosity calculation?
31
Why is one picture of this star blue with red, and the other red with blue?