Do we have to take gravitational lensing into consideration when measuring the size of exoplanets?

No, there is no effect here.

Gravitational lensing magnification works by increasing the observed surface area of the lensed object while preserving the surface brightness. An exoplanet angular diameter is much smaller than that of its host star (even if we can't resolve either). Hence, all the magnification happens across a uniformly lit background, for which the measured increased brightness is zero. In effect, you stretch the image of part of the star into equally bright other parts of the star, resulting in zero magnification - the Einstein radius of the lens is much smaller than the radius of the star.

You might get a negligible effect when the star moves across the edge of the stellar disk.

Why does even that not matter?

The geometry is very disadvantageous. Setting aside the small mass of the planet (which is another factor), gravitational lensing works best when the distance between source and lens is about the same as the distance between lens and observer. This is very much not the case in the scenario we look at here.

Also, there will be other effects that will completely dominate any lensing going on.

Edit to emphasize the size argument 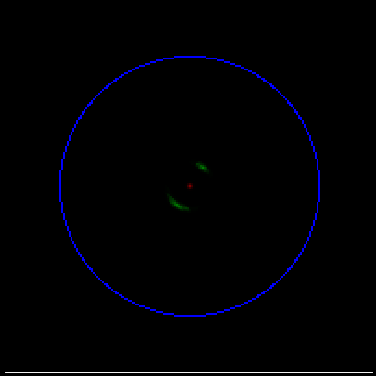 In this image you can see a small source in red, and the resulting lensed image in green. Note that the increase in brightness is purely an effect of the size of the lensed image, not more flux per area. If we assume that the blue circle is the size of the star, we can see that any lensing happening while the planet transits its star will simply stretch parts of a bright uniform background into other parts of the same bright uniform background. Of course, the extent of the lensed image here is greatly exaggerated in order to be able to show any lensing features at all. With a planet in front of a star you would not even get multiple images.

Not the answer you're looking for? Browse other questions tagged exoplanet gravitational-lensing .

7
Does gravitational lensing cause a black-hole to be the main 'source' of light in a given area?
4
How can a galaxy in-between our view and the galaxy behind it have a 'lensing effect'?
1
Could the Earth use gravitational lensing / bending of light to see it's own bottom?
10
What is the scale of things you can see with gravitational lensing?
1
Given that gravity bends the path of light, how confident can we be that galaxies are where they seem to be?
7
Is gravitational lensing a good way to search for negative mass?
1
Is a black hole found in the centre of the low-surface-brightness and dark-matter-free galaxy AGC 114905
7
Is one transit enough to be confident that we detected an exoplanet