How much light would be reflected from Jupiter to Europa (in Europas night)?

Suppose Europa is found habitable and humans start living on it. Europa is close to Jupiter and during the night Jupiter would be reflecting light to Europa, just like our full moon reflects light to earth. Our moon is small compared to Jupiter. Would humans still need artificial light during Europas nights?

It's a pretty straight forward calculation of 3 factors. Distance from the sun, apparent size and albedo. I'm going to compare Jupiter to our full moon, since we're all familiar with that.

Brightness is also important. The Moon is very dark with an albedo of about 12% - about the color of worn or greyish asphalt. Jupiter's bond albedo is about .34, so it would reflect nearly 3 times more light. That means per square meter, Jupiter is up to about 1/8th to 1/10th as bright.

The big difference is size. From Earth, the Moon takes up about 1/2 of 1 degree of arc. Jupiter's diameter is about 37 times the Moon's diameter. It's distance to Europa is about 1.73 times Earth's distance to the Moon, so it's apparent size would be about 21 times the diameter (about 10 degrees of arc), the reflective area is closer to 450 times. If you divide that by the ratio of 8 to 10 depending on how close or far Jupiter is to the Sun in it's orbit, A full Jupiter would be the brightness of roughly between 45 and 55 average full moons. It wouldn't glow as brightly, though some of it's lighter bands would be almost half way there. But the entire package would be 45 to 55 times as bright (ignoring any atmospheric reflection, which would make it appear even brighter).

That's probably bright enough to read under, but not so bright that it would hurt your eyes if you stared at it.

This only answers your question for a full jupiter, but the ratio, 45 to 55 times brighter should be about right for all the phases. And about 450 times larger than an average Moon. The Moon's size varies fairly significantly from Earth, though we don't always notice. Europa has a much more circular orbit around Jupiter, so it's size would stay about the same from the surface of Europa.

This is based purely on Stellarium's simulation, so may not be accurate.

From Europa, full Jupiter has a magnitude of almost -17 and an angular diameter of 12 degrees: 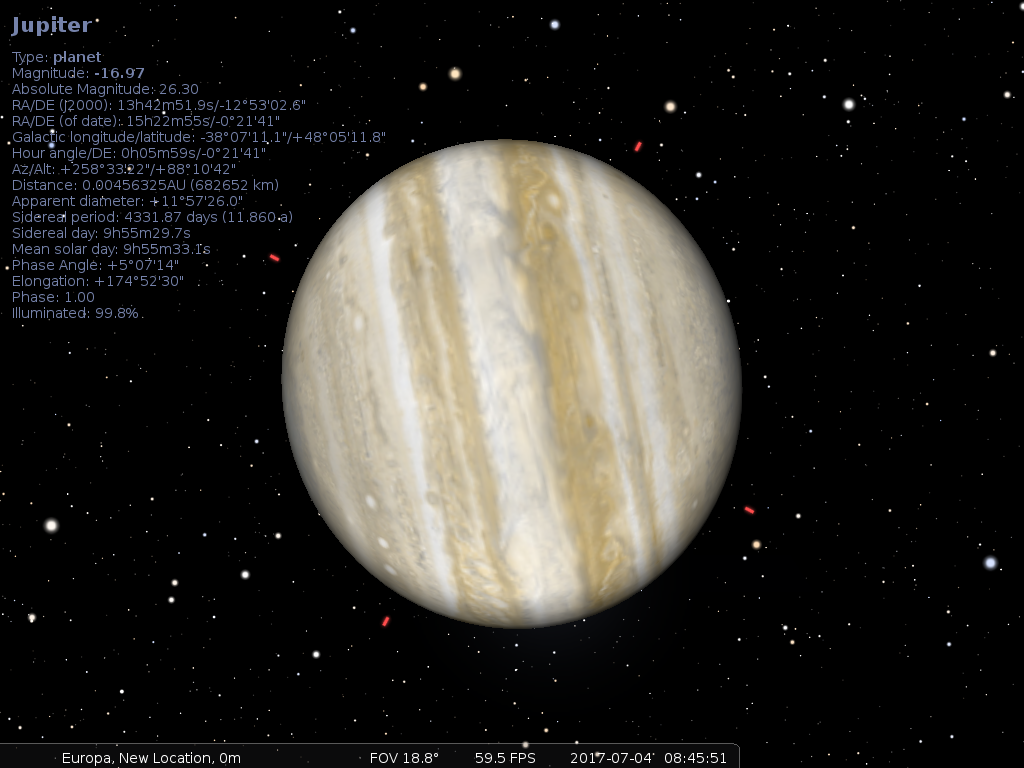 This makes it about 56 times brighter and 24 times larger (in diameter, not area-- it's about 600 times larger in area) than our full moon (magnitude -12.3), more than good enough for reading.

It's still not as bright as the Sun on Europa, which clocks in at a magnitude of -23.06: 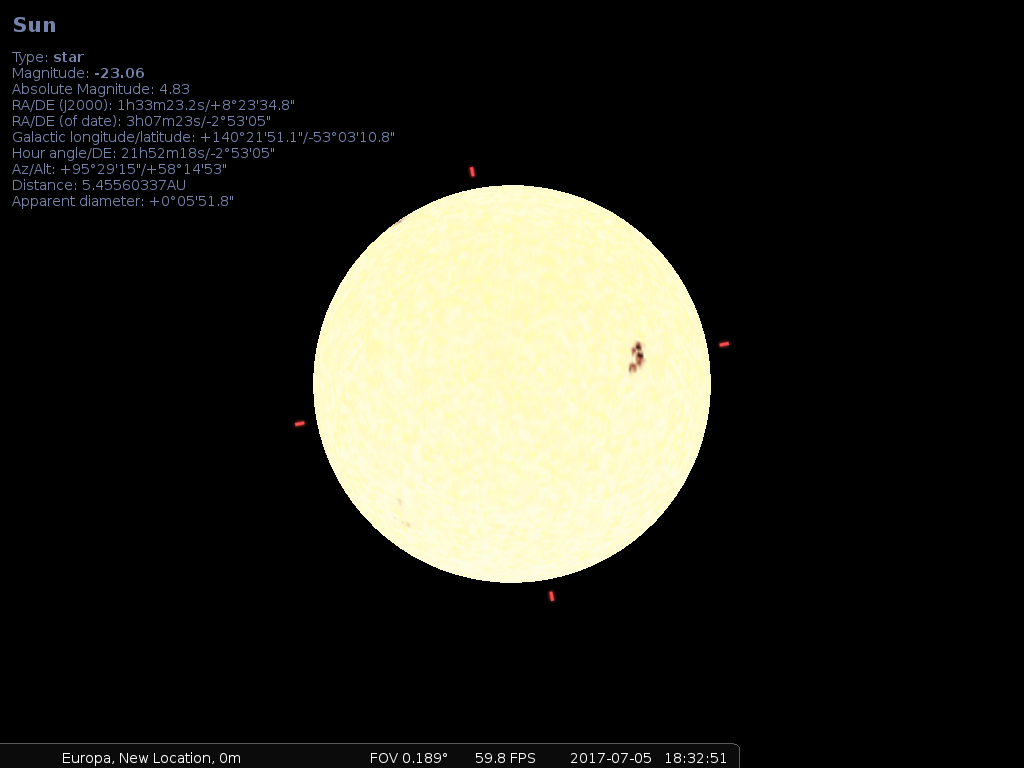 If you accept the quarter moon (magnitude -10.0) provides sufficient reading light, two of Jupiter's other moons (Io and Ganymede; Callisto is very dark and has a low albedo) can do this as well: 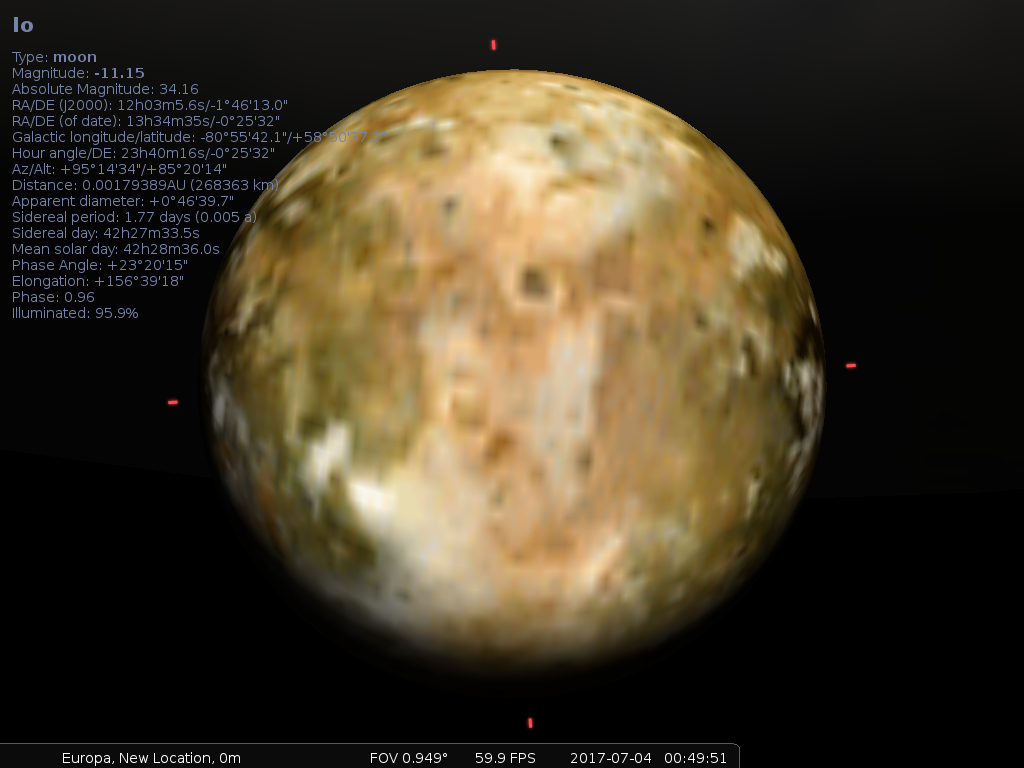 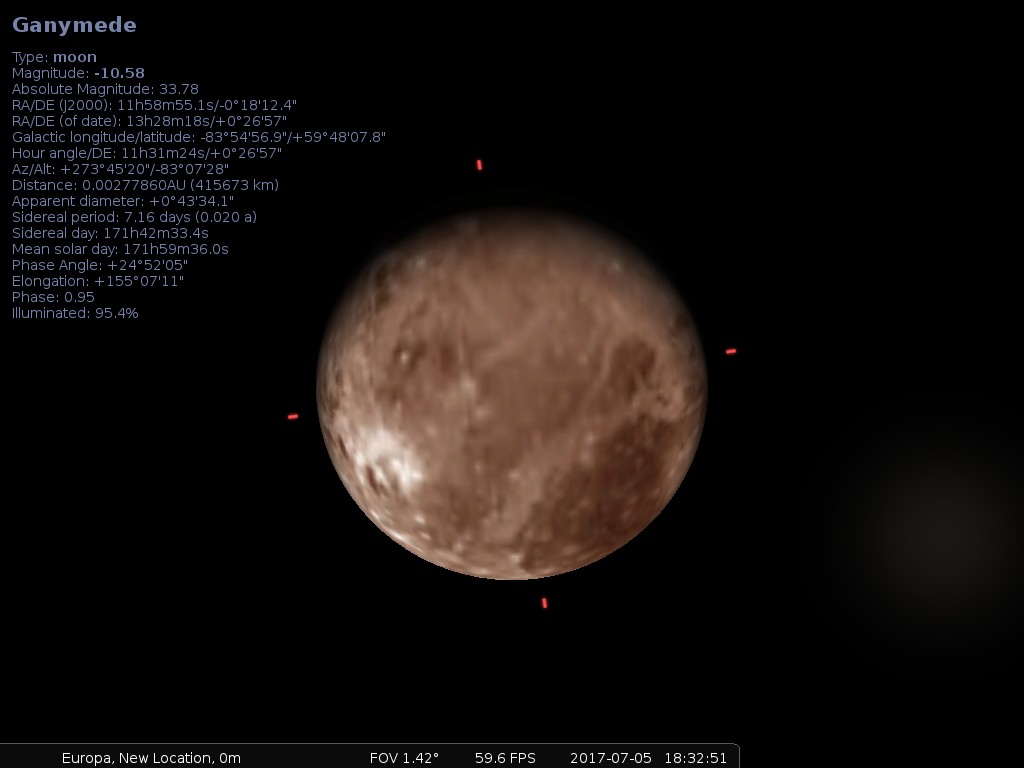 So it seems Europa's sky is fairly well lit, even at solar night. But don't get your hopes too high: I performed this simulation at the intersection of Europa's equator and prime meridian. An earlier simulation in the northern hemisphere showed that Jupiter doesn't rise at all there.

Not the answer you're looking for? Browse other questions tagged light jupiter habitable-zone night-sky europa .

5
Does Ganymede have a day/night cycle? If so, what does it look like?

5
Help in determining the features of an unusual, fictional star system
6
How bright are the outer planets, when at close range?
5
Does Ganymede have a day/night cycle? If so, what does it look like?
6
Is there an example of a star that is already dead, but can still be seen on Earth?
3
Is there enough light to grow plants in the ocean of Europa?
3
Which kinds of astronomical observations most need to avoid the Moon being up?
4
What would Jupiter look like from a Galilean moon?
1
Events I cannot explain
2
How thick is the ice on Europa?